Created Equal: Clarence Thomas in His Own Words

for thematic elements including some sexual references. 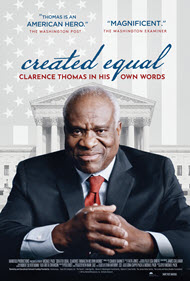 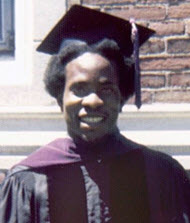 The life story of Judge Clarence Thomas, one of the most influential and conservative justices on the Supreme Court

Since joining the court, Thomas has taken a textualist approach, seeking to uphold the original meaning of the United States Constitution and statutes.

Clarence Thomas: “For what will you die? Is there something in life that you will die for? What about your principles? I decided that the principles on which I was raised, my grandparents, the principles of this country, were worth dying for.”

Thomas’s personal experience as a young man of being misled and manipulated by Leftists into becoming an atheistic, hate-filled Marxist

Life begun in extreme poverty in the segregated South

About the poor in the Bible

Being severely and cruelly attacked in numerous ways by the Left

Prayer and trusting in God for vindication 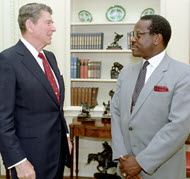 “Lord, if you take anger out of my heart, I will never hate again.” 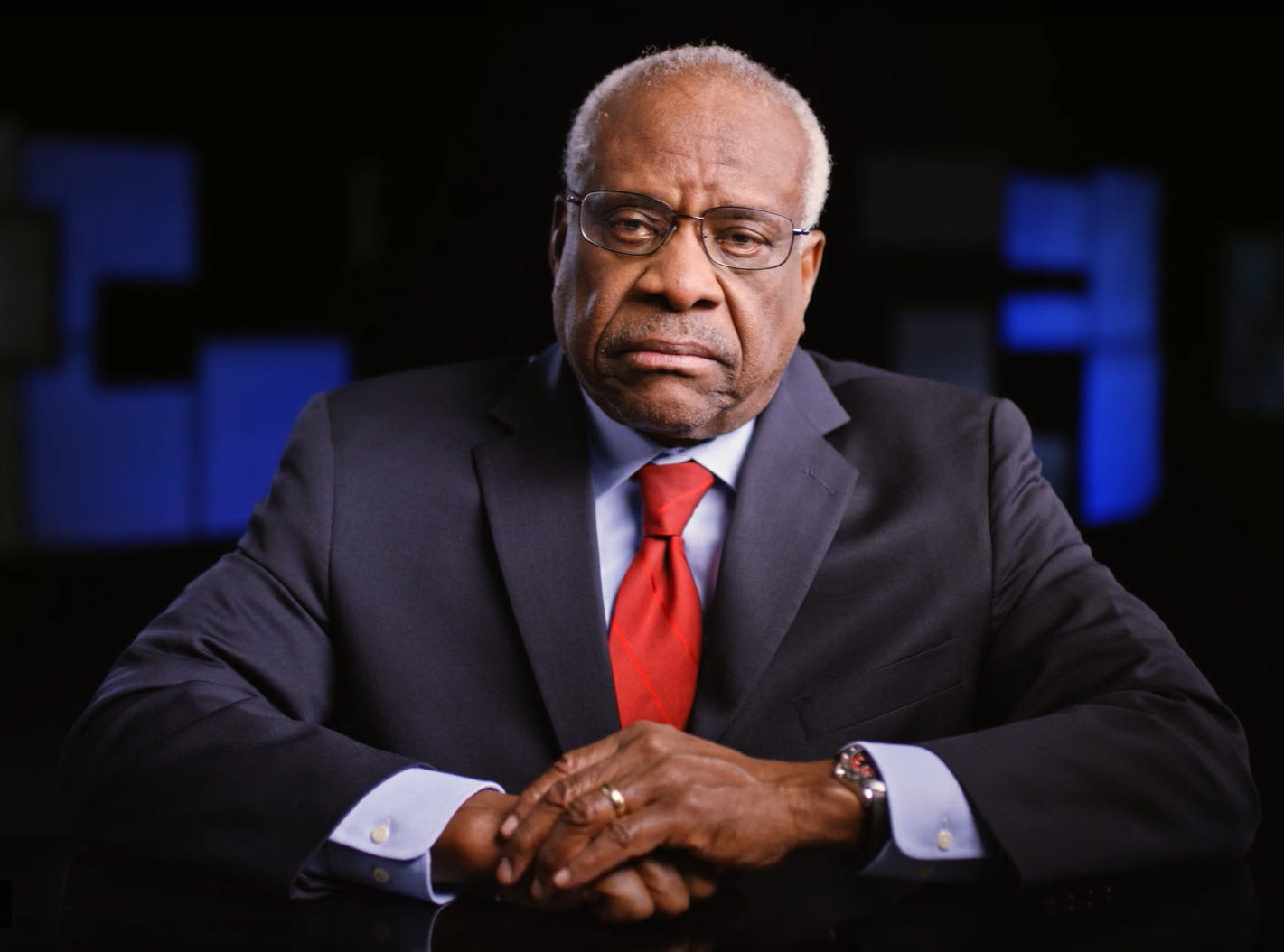 Michael Pack’s two-hour documentary, “Created Equal: Clarence Thomas in His Own Words,” is a gripping portrait of one of the most misunderstood, and misrepresented, figures in American history, certainly American judicial history.

The film combines archival footage with personal testimony placing a camera in front of its subject who sits behind an unadorned desk and under a bare lamp.

“Created Equal” has none of the accoutrements that were on display in the recent documentary of Justice Ruth Bader Ginsberg (“RBG,” released in 2018): background applause, complementary laughter, and an abundance of dainty morsels, such as the one about Ginsberg doing 20 push-ups in a week. Impressive, yes, but OMG worthy, I dunno. So many such hors d’oeuvres were sprinkled throughout that rah-rah fest that the main course was easily forgotten. The Thomas documentary, on the other hand, lets the Justice tell his own story in a style that may be spare but has a force that commands attention.

Clarence Thomas was born in Savannah, Georgia. His father abandoned his family early, leaving Clarence and his two siblings in the care of their mother. She supported the family by working as a maid. The house they lived in had no plumbing. Raw waste ran directly into the streets, and the townspeople had to walk on planks to avoid stepping in the sewage.

While still boys, Thomas and his younger brother were sent to live with his grandparents. He packed all his belongings in a small paper bag. When he was done packing, “there was still room left in the bag.”

His grandfather’s first words to the boys were: “The vacation is over!”. He made the boys go to school: “If you’re sick, you still go. If you’re dead, I’ll take you myself, and I’ll watch you, just to make sure you’re not faking.”

As a teen, Thomas enrolled in a Catholic seminary. While studying for the priesthood, he worked hard and succeeded: “a grade of 98 was not good enough. I had to make 100.” He knew that racial prejudice would present barriers, but he was determined not to let anything else stand in his way. If he proved himself the best at all things then it “would leave them nothing but race.”

He became disillusioned with the seminary when another student made a racial comment about the assassination of Martin Luther King Junior. Thomas left the seminary soon afterward. When he did, his grandfather threw him out of the house, telling his grandson that he would not support a quitter.

The strained but binding relationship between grandfather and grandson is perhaps the most formative factor in Thomas’ growth and development; the few times Thomas shows emotion in front of that gaping lens and glaring light is when he is speaking about his grandfather.

After leaving the seminary and his home, Thomas enrolled in Holy Cross College where he immersed himself in student activism and radical politics. He renounced his faith during his college years, and became angry to the point of rage over the racial injustice and the social inequity he saw everywhere around him. He sought radical change. He viewed non-radicals, even his grandfather, as sell-outs to a society that turned away from those who needed help the most. But there came a point when he saw that his anger was getting the better of him. He went to a church, knelt down, and made an oath. With God’s help, he would never hate again.

After college, Thomas joined the staff of Missouri Attorney General and future Senator John Danforth. He rose quickly, becoming Assistant Secretary of Education for the Office for Civil Rights in the U.S. Department of Education under Ronald Reagan, then chairman of the Equal Opportunity Employment Commission. President George H.W. Bush appointed him to the Washington D.C. Appeals Court, and in 1991, nominated him to the Supreme Court.

I watched the televised Supreme Court hearings in 1991, but I had forgotten a lot of the testimony, and over the course of the ensuing years, the news and entertainment media has worked hard in an effort to sway public opinion against Thomas. Their efforts had an effect. Nonetheless, at the conclusion of the hearings, the public supported Thomas by a large margin, , and he was confirmed as a Supreme Court judge by a Senate that, at the time, was under Democratic Party control.

Charges of a sexual nature were made against Thomas involving statements that, by today’s standards, seem almost tame, but spoken out loud in a courtroom to a live television audience, sound as shocking today as they did then. The film makes evident how such salacious charges can be packaged and timed in a way that elicits the biggest impact. The witness’ story started small, but it evolved and expanded the closer she got to the Senate chambers, and to the television cameras.

The chairman of the Senate Judiciary Committee (Joe Biden) who ran the hearings is today, almost 30 years later, running for President of the United States. For those who think that candidate may currently be suffering from memory lapses and confabulations characteristic of changes that happen in old age, I encourage them to pay attention to the 1991 version. The bewildering circumlocutions and dizzying flights of ideas that we are watching during this season’s debates and town hall meetings are not new.

During that crisis, Thomas was brought so low, that it seemed impossible for him to recover. The media relentlessly fought his nomination. Reporters went through his trashcans in hopes of finding evidence against him. Some even scoured video store logs to try to find records of Thomas renting pornographic movies. Newspaper cartoons depicted Thomas as a lawn jockey and a shoeshine boy.

Support for his nomination started to wane. If Thomas was to resurrect his reputation, he would have to do so on his own. He did. The documentary reveals how Thomas, by the power of his own carefully chosen words, brought himself back from the brink, reminding the Senators, and the public, what was taking place. He referred to the hearings as a “high-tech lynching,” and he vehemently denied the charges that were made against him.

He and his wife, Virginia, prayed daily during the process (Senator Danforth who helped launch his career and guided him through the nomination ordeal is an ordained Episcopal priest). Virginia Thomas gives some of the most moving testimony in the film. During the hearings, she believed that it was no longer her husband who was talking: “My husband had been destroyed. It was not he who was speaking. God was speaking through him.”

Despite the trials and the setbacks depicted, the film contains moments of bliss and joy

Despite the trials and the setbacks depicted, the film contains moments of bliss and joy: Thomas’ reverie with his law clerks, his affection for recreational vehicle travel, and his sharing time with everyday, non-Washington people who visit trailer parks and shop at Walmart.

Justice Clarence Thomas is an American original, and he has a fascinating story to tell. Michael Pack’s thoughtful, intelligent and incisive documentary dispels the notion that Thomas is distant, reticent (he almost never asks questions of lawyers who bring cases to the Supreme Court), and rigid. He is passionate, affable, and often quite funny. Fundamentally, he is a man dedicated to his country, its Constitution, and above all, to his faith.