for terror, violence and bloody/disturbing images. 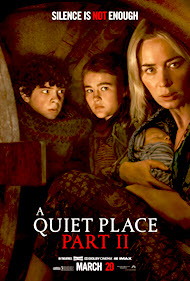 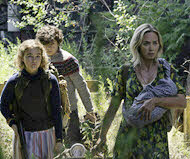 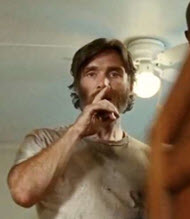 What does it take to survive in a very dangerous world situation? 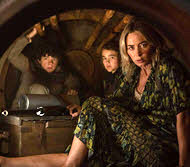 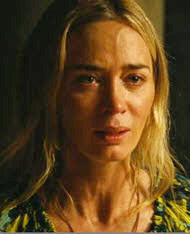 About despair and hope 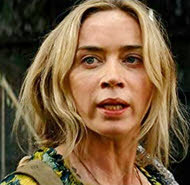 “Silence is not enough”

WARNING! If you haven’t seen the first Quiet Place film, there are spoilers ahead.

Shortly after the events of “A Quiet Place,” the Abbott family (Emily, Marcus and Regan) are left with very few choices as to what to do with their lives after the death of Emily’s beloved husband, Lee. With very few resources remaining and with the knowledge of how to defend themselves and defeat the alien creatures, the Abbott family leaves their homestead on a quest for the other survivors. After all, as Emily (Emily Blunt) states, “There are people still worth saving.”

Along the route, the Abbott family runs into Emily’s brother-in-law Emmett (Cillian Murphy). While seeking refuge with Emmet, he informs his family that much of the world they know is gone and that those who are left are not the type of people you want to save (in other words, they’ve become very hostile towards the world and strangers). Emily takes this advice into consideration, as her first priority is her family, and the creatures they encounter are getting smarter every day, so venturing out isn’t the easiest option. As for Marcus and Regan however…

Marcus agrees with his Uncle Emmett. Regan, however, knows EXACTLY how to defeat these creatures, by increasing the frequency of her cochlear implant, amplifying it and aiming the sound at the creatures. Of course, her mother would never let her venture out on her own, and Marcus says he won’t support her sister on this, so Regan decides to sneak out and find someone who will help her defeat these creatures, once and for all.

I respect his candor and appreciation for the cinematic arts and what makes for good filmmaking. Krasinski may still be new in Hollywood, but it feels like he takes time to know his audience BEFORE creating his product, and it shows.

While “A Quiet Place” emphasized the dread of silence and the type of fear that can instill, Part II’s primary focus is on what happens when the blindfold is off and you have to face a fearful foe. There’s plenty of intense moments of genuine uncertainty and anxiety, as the fear of the unknown still lurks around the corner in this film. Viewers may still feel like hiding with every step the Abbot family takes on the sanded path, whispering to themselves, “Please don’t step on a loud branch.” One never knows what element in an everyday scene is going to be the one that sends the aliens racing over in a matter of seconds. The tension is a testament to both the actors and Krasinki.

While in the first film the focus was on Emily and Lee, this time it is more of Regan’s story. Millicent Simmonds (who plays Regan) is a commanding young actress who shines in every scene she’s in. She drives the narrative, but not in the way some may expect. Her struggles don’t define her, they encourage her to press forward and she uses that to her advantage on screen. Even Cillian Murphy, who later joins her journey, is just along for the ride.

Last, but certainly not least, the film’s soundtrack is one of its defining features. The music is a prominent player in a good way. It flows evenly with the rhythm of the story.

What could be improved in this sequel? I think the overall pacing of the film. The first movie had a much more even pacing where, even when it was quiet, the action was a little more evenly placed. Also, I would have liked to see a little more character development in Part II, particularly with regards to the brother-sister relationship between Marcus and Regan; that relationship could prove valuable in Part III (who knows?).

Violence: The violence in Part II is much heavier, most of it in the form of the alien creatures attacking humans. People are dragged off screaming or tossed around by these creatures or killed (usually brief moments though). One person is stabbed on a pole by one of the creatures. The creatures are seen attacking cars as well. One particularly disturbing scene (I really wasn’t a fan of) is when a young character gets their foot caught in a bear trap. We can hear the child screaming and his foot bloodied. We also hear the child scream when antiseptic is poured onto the wound. Creatures are seen lit on fire and shot by shotguns and other weapons which result in seeing their insides and pools of blood. A man is seen struggling underwater with a noose around his neck. A character is pierced in the leg. We also witness some dead creatures and human corpses (some decomposed). A metal rod is driven into an alien’s head.

When Regan is asked why she is going to risk her own life to get help to fight the creatures, knowing full well that it’s extremely dangerous, she says, “Because it’s what Dad would do.”

How far would we go to protect the ones we love? I would hope to the ends of the Earth. Our Lord and Savior, Jesus Christ, sure did. He risked his own life, was spit on, mocked, tortured and crucified on a cross for us sinners, even for those who did not know Him. That’s love. That’s unconditional true love.

“For God so loved the world, that he gave his only Son, that whoever believes in him should not perish but have eternal life. For God did not send his Son into the world to condemn the world, but in order that the world might be saved through him.” —John 3:16-17

“But he was wounded for our transgressions; he was crushed for our iniquities; upon him was the chastisement that brought us peace, and with his stripes we are healed.” —Isaiah 53:5

“By canceling the record of debt that stood against us with its legal demands. This he set aside, nailing it to the cross.” —Colossians 2:14

And, on this Memorial Day, when we thank and honor those who have served and continue to serve and protect and lay down their lives for us, remember this…

“A Quiet Place Part II” is a film that feels like a “thank you for your continued support” from Krasinki and it shows. While nothing quite beats the original, this one comes pretty close, and it shows that the thriller genre is not dead and that some films, truly, are best left for the theaters.

While the film’s violence is bit heavier this time around, it doesn’t necessarily detract from the film, nor does it warrant strong caution. I would say, ultimately, the choice lies with you. However, if you plan on going I recommend you watch Part I first, and leave the children at home.

Comments from young people
Positive—A worthy sequel! I absolutely loved the first film and was so pleased by the movie making quality and wholesomeness of the film. It’s rare to find an entertaining horror movie with absolutely no problematic content. I was also very happy with the film makers decision to include a scene of prayer as many movies made nowadays hardly ever show prayer. While “A Quiet Place Part 2” does not have a scene of prayer in it, the film still has much to appreciate.

The suspense in this film is just as terrifying as in the first film. There are many good scary moments and some good jump scares that made me leap out of my seat! Marco Beltrami’s score is just as beautiful and eerie as ever! The cinematography is gorgeous and many of the settings are perfect for this terrifying movie. The acting is great and the scene where Marcus stepped in the bear trap amazed me. Noah Jupe who plays Marcus did a fantastic job and had me convinced he was in agonizing pain! I also loved Cillian Murphy as Emmett. I appreciated the character development of Emmett as he went from wanting nothing to do with the family, to becoming a father figure for Regan. He was ready to lay down his life for her at the end just as Lee did in the first film.

I do feel that Part 2 was a little bloodier than the first, but I wouldn’t call it super disturbing or gory even. As mentioned earlier, one of the bloodier scenes happens when Marcus steps in the bear-trap. The audience sees the trap close around his ankle and his leg covered in blood, but we don’t see a graphic close up shot of his injured foot. In an early sequence we see how the alien’s came to earth on a meteor and tore through the town, swiping and clawing everything in their paths. In the background, some dead bodies laying in blood can be seen during this scene. Emmett gets his leg clawed by an alien and we see him crawling away with blood on the floor around his leg. Regan kills an alien and it dies in a pool of it’s own blood. Decaying, bodies are bloodlessly seen on a train and their is constant peril throughout the film.

As for language, I heard one s-word and one exclamation of OMG at the beginning but didn’t hear anything else in the film. After I bought the movie on DVD though and watched it with the subtitles on, I noticed a character misused Jesus’s name once and there was a second S-word along with a use of GD. Keep in mind though, these words are all muttered under people’s breath and I seriously thought they were just groaning when I first saw the film in theaters.

There is nothing sexual to worry about in this film. I honestly recommend this movie to anyone who loved the first. Both Quiet Place films are masterpieces! Part 2 had me on the edge of me seat for nearly the whole movie.

I wouldn’t recommend the film to anyone under the age of 12 unless they really like scary movies. When I went to see this in theaters, I was surprised by the amount of children in the audience who looked no older than eight or nine. However, they seemed to enjoy the movie, so I suppose if your kid is the type who really likes scary stuff, well this movie is one of the safer choices. You do not have to worry about bruising your Christian faith while watching this masterpiece of a horror film!
My Ratings: Moral rating: Average / Moviemaking quality: 5
Mia, age 19 (USA)