Minions: The Rise of Gru

for some action/violence and rude humor. 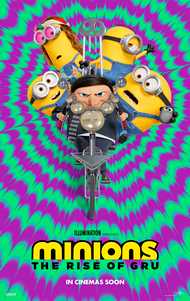 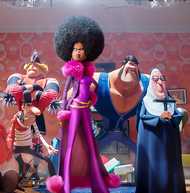 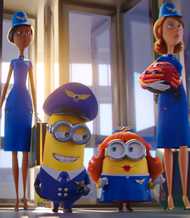 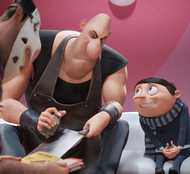 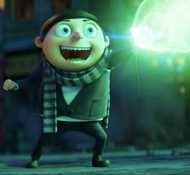 The fifth film in the “Despicable Me” franchise has gone retro and it’s far out, funky and groovy.

Set in the heart of the 1970s, amidst a flurry of feathered hair and flared jeans, “Minions: The Rise of Gru” tells the origin story of 12-year-old's Gru (voiced by Steve Carell) dream to become the world's greatest supervillain.

A sequel to “Minions,” which was a prequel to the first two films in the series, the animated movie provides fans more of what they’ve seen, specifically Gru acting nefarious, the lovable Minions acting silly, and lots of clever quips and gags that will go over young audiences’ heads but amuse grown ups.

Laugh out loud funny, The Rise of Gru is an entertaining and feel-good (albeit mindless) summer blockbuster that is mostly family-friendly. It’s certainly much more enjoyable than Pixar’s Lightyear!

The Illumination Studios movie, which features colorful, top-notch animation, espouses themes of sticking together, not giving up, loving others and discovering a family. Like the other titles in the franchise, the film features plenty of bathroom humor, including fart guns and limited views of buttocks nudity in scenes of comedy.

Also, small children may be scared by the supervillains who become scarier toward the film’s end. Additionally, Catholics may take offense with a nun character with nunchuks who is portrayed as a villain.

Gru hatches a plan to become evil enough to join them. Fortunately, he gets some mayhem-making back-up from his loyal followers, the Minions. Together, Kevin, Stuart, Bob, and Otto--a new Minion sporting braces and a desperate need to please—deploy their skills as they and Gru build their first lair, experiment with their first weapons, and pull off their first missions.

So when the Vicious 6 oust their leader, legendary fighter Wild Knuckles, Gru interviews to become their newest member. It doesn't go well (to say the least), and only gets worse after Gru outsmarts them and suddenly finds himself the mortal enemy of the apex of evil.

On the run, Gru will turn to an unlikely source for guidance, Wild Knuckles, and discover that even bad guys need a little help from their friends. Meanwhile, the Minions receive some kung fu lessons from unassuming acupuncturist Master Chow (Michelle Yeoh).

Part of what “The Rise of Gru” makes a fun movie is its lively soundtrack, including classic '70s hits such as “Like an Eagle,” “Dance to the Music,” ”Black Magic Woman,” “You’re No Good” and “Funkytown.”

“The Rise of Gru” is another example of Hollywood’s penchant for milking a cash cow movie series. But unlike some other franchises (I’m calling you out, “Fast and Furious”), the “Despicable Me” films are amusing and believable.

“The Rise of Gru,” which has garnered a 92 percent audience score and 69 percent critics grade on Rotten Tomatoes, is expected to illuminate the July 4 weekend box office with a $70 million debut. The film reportedly has an $85 million budget.

Featuring no deep meaning or higher message, “The Rise of Gru” is a simple carefree movie that presents another feel-good dose of bad behavior, which likely will be despicably welcomed by some audiences.

Content Watch: “The Rise of Gru” is rated PG for some action/violence and rude humor. There are frequent burps and fart jokes, but no profanity. Nunchuk shouts Hallelujah, but not as a praise to God. The movie’s plot device, the Zodiac Stone, has some type of special powers that is not fully explained. A character does yoga and there are New Age references, including a guru. There are comedic sequences of physical combat and slapstick violence, involving kicks and punches which are shown in slow-motion but without any injury detail. Villains magically transform into monsters who attack protagonists. A character is tied to the hands of a clock, which causes him to stretch alarmingly, but he is rescued before actual damage occurs.

Positive
Positive—My daughter and I enjoyed this movie. We saw it in 3D! Basically it was not “woke”… the movie was fun and stayed true to the previous movies in terms of content. I did not like how one of the villains was a ‘nun’… I explained to my daughter that she was not a real nun, she was pretending. Overall, I would recommend this movie.
My Ratings: Moral rating: Better than Average / Moviemaking quality: 4
Denise, age 42 (USA)
Negative
Negative—Movie was highly disturbing and demonic, portraying evil as good, teaching eastern religion, which including the release and possession of demons into the human characters. Glorifying crime and idolizing criminals was the disturbing part, along with grooming the idea of “good” villains (much along the lines of the 80/90s movies trying to foster “white” magic or “good” witches) in children.

It cannot be understated that at the end, certain of the villains are possessed by the demon spirits of the Chinese zodiac which is the goal of the movie from the beginning. I regret 1000% seeing this movie with my child. Sadly, he has seen enough occultic content woven into movie snippets and video game themes, that although he was disturbed by an early Indiana Jones-style scene showing skulls, he didn’t have any understanding of anything evil about the spirits that overtook the human characters.

I had seen neither of the Despicable Me movies to know what the content was like before, regrettably.
My Ratings: Moral rating: Offensive / Moviemaking quality: 3½
TJ, age 51 (USA)
Negative—I fully agree with the negative comments above about this children’s cartoon. This movie is extremely violent and glorifies crime and evil. Seems like the characters are almost constantly hitting each other. I would not let my children watch this cartoon.

I have asked the Lord many times for discernment between Good and evil, and I believe he has answered my prayers.
My Ratings: Moral rating: Extremely Offensive / Moviemaking quality: 1
William Holm, age 65 (USA)