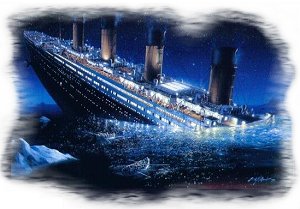 In 1898, 14 years before the Titanic made her maiden voyage, Morgan Robertson published his book, Futility or the Wreck of the Titan. This was the story of an “unsinkable” massive ocean liner, which like the Titanic, was on its maiden voyage from Britain to New York in the month of April, with 2,000 people on board. While it was also attempting to cross the Atlantic in record time, it too struck an iceberg and sank. Not only were the ships' names very similar, but most on board also perished simply because there was of a lack of lifeboats.

But most remarkable of all, the story of the Titanic has incredibly close parallels to the biblical plan of salvation. Just as the great pleasure ship struck an iceberg and sank, this great world—with all its inhabitants, is slowly sinking into the cold grip of death. As with the passengers of the Titanic, only those who believed that they were in impending danger looked to the lifeboats, so only those who believe that they are in mortal danger will look to the Lifeboat of the Savior, Jesus Christ. The great “iceberg,” which will take the world to an icy grave is the Moral Law—the Ten Commandments.

Here is the evidence that we are sinking: Jesus said that if we look with lust, we commit adultery in our heart. No one who has had sex out of marriage, or any liar, or any thief will enter Heaven. The Bible says that if we hate someone, we are guilty of murder. We fail to put God first. We make a god in our image. We break all the Commandments.

If we stay with the “ship,” we will perish on the Day of Judgment, when all of our sins come out as evidence of our guilt. God, however, is rich in mercy and doesn't want anyone to go the Hell. He made a way for us to be saved. Jesus Christ, the One whom the Bible calls the “Captain of our salvation” gave His life so that we could have a place in the life boat. He took our punishment upon Himself—suffering on the cross for us. We broke God's Law, but He paid our fine. Then He rose from the dead, defeating death. The moment we repent and trust in Him alone for our eternal salvation, God will forgive us and grant us the gift of eternal life.

Don't hesitate. You may leave it too late! It was reported that some of the lifeboats that left the ship early were only half full. This was because many on board refused to believe that the—unsinkable—Titanic was sinking. They perished because their faith was misguided. Don't be like them. Believe the gospel. Repent and trust Jesus Christ today, read the Bible daily, obey what you read, and God will never let you down.