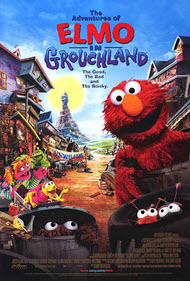 “Elmo in Grouchland” is a fun-loving film targeted directly for the Sesame Street generation with all of their regular characters—muppet and human—casted in the film. It is silly at times and always spirited with colorful song and dance routines that seem to light up the children’s eyes. Your younger children will walk away saying, “That was fun!”

The basic story is about Elmo’s search for his favorite blue blanket which is sent into Grouchland following a game of tug-of-war. The tickable muppet must venture into the mysterious land where he encounters the selfish Huxley, played by Mandy Patankin, and the Queen of Trash, played by Vanessa Williams.

The film begins with Bert and Ernie, who act as narrators of sorts, encouraging the audience to participate in the film. They return at selected moments—usually when Elmo is in trouble—to reassure the audience not to worry and that all will turn out alright in the end. It is a nice touch for those children who may get upset by some of the “adventures” Elmo encounters.

The film attempts to entertain and to teach focusing on the evils of selfishness, the benefits of teamwork, and the need for courage in the face of trials. Although the “lessons” are valuable, the focus is not Christian and seems to rely upon man’s ability to overcome as opposed to God’s grace and empowering strength. But that may be too much to ask of a movie and these lessons can easily be taught to your children after the film using its scenes as a point of reference.

Some may think the scenes with the Queen of Trash, dressed in a tight body suit, to be a little suggestive but I found that my children simply thought her to be a “pretty lady.” In the end, there is not much to object to in this film. It is a good way to spend an afternoon at the movies with your children followed by an ice cream cone and sincere conversation. Enjoy!

This movie was great for the kids. I was not too thrilled with sitting through the movie because very little effort was made to attract adults. This was unfortunate because the message behind the movie was important… especially for adults. Hey people, it’s time to quit taking things that are not yours! Hey maybe I learned something after all. My Ratings: [4/3]

Cherish Howell, age 28
I was wary of this film from the get-go, but my son begged to see it… I can’t begin to express what a mistake this was… The cinematography and imagery, of course, were top-notch. But could this have been the colorful candy shell on an otherwise bitter pill? My Ratings: [1½/3½]

Jesse M. Dorn, age 29
Though I found this film to be very well-made—using all of the latest tricks of the trade in Hollywood—this made its thoroughly un-Christian message all the more insidious, nefarious, and potent. This film features a red-faced quasi-human—a moral monster—on an odyssey through a world of Trash… The music was relatively enjoyable. My Ratings: [1/4]

Harold Blanner, age 35
I took my 22 month-old nephew to see The Adventures of Elmo in Grouchland yesterday. Turns out the whole movie is about Elmo’s quest to get his blanket back after it is sneezed on by Oscar the Grouch and thrown into his trash can. My nephew was completely attentive throughout the movie. (I liked it because he never sits on your lap that long under ordinary circumstances.)

The movie was very good for kids—more so than most so-called kids’ movies. The “villain’s” claim to villainy is that he takes other people’s things (including Elmo’s blanket) and labels them MINE! Whenever things got a little tense or scary, Ernie and Bert march out on the screen and say “Stop the Movie!” …then Ernie would reassure Bert (and all the kids too) that everything would work out just fine. Other than the fact that the trash queen (played by Vanessa Williams, of fallen Miss America fame) was for some reason a very seductive character (too much like an erotic dancer for the under 5 set), nothing overly objectionable. (The trash queen likes to spit raspberries, which may not be the best manners…)

They try to make it interactive—i.e., the kids in the audience think they’re helping Elmo get his blanket back. The script includes a few funny lines for the parents too—but for me, watching Sam enjoy it was enough!

Deborah Cox, age 29
I took my three-year-old to see this movie. I thought it was a very cute movie, and it held his attention most of the time. The songs were cute and the interaction with the audience made it fun. It’s true that Elmo’s search for his blanket was a little overly earnest, but in the end he shares it with his friend, Zoe, which I feel helps defer that idea.

The value taught in this movie is “unselfishness”, a fruit that two and three year olds don’t quite understand yet, but can use all the help they can get. I would strongly recommend this movie to any person who would like to take small a small child/children to the movies (or to any age, for that matter).

Amy, age 30
This movie was cute—but definitely just for kids. It was sort of like a 2 hour episode of Elmo’s world. It had a good message for little guys about not being selfish. My only real complaint (besides the humor only being on one level) was Vanessa Williams. I think her character was WAY too suggestive for a children’s movie… Otherwise, it was okay.

Jessica Clark, age 21
The small fry it’s aimed at are bound to have a good time, although only they can really judge whether the search for a missing blanket is strong enough conceptually.