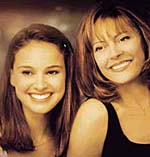 “Anywhere But Here” is simply a wonderful movie possessing an excellent cast, beautiful story, and a strong message.

Here we meet Adele August (Susan Sarandon) and her daughter Ann August (Natalie Portman) as they move from small-town Bay City, Wisconsin to the West—hopefully a better life in Beverly Hills, California. In moving cross-country, Adele leaves behind her second husband (her first husband had left her ten years earlier). You never get a true explanation as to why she leaves her husband, though Adele feels he has possibly been unfaithful.

While Adele wants to move, her daughter Ann doesn’t want to leave the place where she grew up. Her family and friends are there. She is content to grow up and mature in her hometown. Eventually, she would like to head off to college. Despite Ann’s wishes, she ends up traveling to Southern California with her mother. Adele wants Ann to get into the show business industry, and it is clear from the start that she only wants what is best for her daughter. And so they move into a Beverly Hills slum and Ann enrolls in a posh Beverly Hills high school.

Mom, an educated woman, gets a teaching position with the Los Angeles Unified School District. She doesn’t make much money and can only afford a low class apartment. In addition, she struggles to pay the bills each month and the lights and phone go out several times. Adele is an insecure woman and always tries to cover up her misfortunes. She goes into denial when something goes wrong. If the lights go out, she contends that she paid the bill. When she parks in a red zone, she pins the blame on her daughter.

Ann, on the other hand, is different. She is independent and wants nothing more than freedom from her over-protective mother. It is a struggle, as she is forced to audition for Hollywood roles and is ridiculed in front of her friends.

Will Adele allow Ann to grow up and become independent?

That’s ultimately where the story takes us and is a key plot to the film. The ending is predictable, but it will easily leave you in tears. With that being said, it is important to note this film does have some objectionable material. The most obvious is the fact that Adele leaves her husband. To make matters worse, she looks for new love in Los Angeles. There are the obvious verbal vulgarities that can be expected in a PG-13 film. Most offensive is the sexually suggestive material which is evident in several parts of the film. In one scene Ann and her close cousin Benny discuss Ann’s feminine development. They also talk about whether they have girlfriends/boyfriends and if they’ve ever had “sexual relations.”

Ann is also at the center of another scene with her boyfriend Peter. The two are together alone at her house. Peter ends up standing before Ann wearing only his underwear. Interestingly, it’s that scene that Ms. Portman apparently was uncomfortable with. Originally, it was intended that she would be naked leading to a scene of sexuality. Thankfully, the scene was reworked and only suggestions of sex remain. Praise Hollywood for listening to one if its bright, young, and most beautiful actresses and creating the scene with minimal offensive material. And even more praise to Ms. Portman for speaking up and protecting her purity.

Despite this objectionable material, this movie is excellent. However, it is not for small children. A child would not understand the more mature themes and it wouldn’t be wise to subject them to the moderate amount of offensive material in this film. For teens and parents, “Anywhere But Here” is a wonderful film.

OK movie. I did not get the idea that Adele left her husband because of his infidelity. I thought she left because she was bored and did not want to be stuck in a small town all her life. If that is the case then I find this movie quite objectionable. We do not need to add to the support of bailing out of marriage due to boredom. I also thought the alcohol use was questionable. And the part where the daughter was visited by a guy and her seduction(?) of him. I work with teens and do not like to see these things in movies.

Kay O'Grady, age 48
This film had some great performances, especially by Natalie Portman. However, there was really no point to it… none whatsoever. There were only a half dozen or so uniquely creative sequences in the film. It was also more than moderately depressing. This is definetely not a happy film. Portman plays a dreary, apathetic 14-year-old teenager named Ann August. In the opening scene, we see her in the passenger seat of her mother’s car, driving down the highway through the Arizona desert. Her mother, Adele (played by Sarandon), is playing the Beach Boys on the radio. Ann turns off the radio, and tells her mother that she hates the Beach Boys. “They’re too… happy.” She says.

A lot of Portman’s screen time is spent scowling, frowning, and crying. She only gets a few smiles in the film. I disagree with Brian’s review, especially how he calls the film “wonderful.” This is not a “wonderful” film, in my opinion. He also claims the film has a “strong message.” Whatever that is, I didn’t pick it up. I suppose the message is “let your child go to whatever college they wish.” That was the only strong message I picked up. I would avoid this film, unless you are a big fan of Natalie Portman. The Savior’s name is used as a profanity several times, and there are several instances of crude sexual dialogue. My Ratings: [2/3]

Rick, age 17
Movie Critics
…Brief moments notwithstanding, very little of interest happens in “Anywhere but Here,” hampered as it is by a syrupy soft rock score and too dispirited overall to be anything more than a wannabe sentimental wallow…

Preview Family Movie and TV Review
…heart and talent to spare; we’ve just been there, done that too many times before…