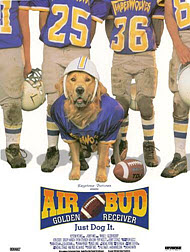 The original Air Bud may very well have been a suitable movie for Christian families; it was after all, the only game in town at the time of its 1997 release. Its sequel, however, is clearly formulaic and is completely void of any charm and imagination. I simply cannot imagine any children over 5 or 6 years old enjoying this—not when there’s better, non-condescending material like “Veggie Tales” that at least has characters you care about.

* Editors Note: This review differs significantly with viewers comments as listed below. Please consider these alternative comments before deciding on this movie based on one reviewer’s opinion.

The sequel covers nearly identical material: Josh Framm (KEVIN ZEGERS), still sad about his father’s death, finds a best friend in Buddy, his trusty and loyal golden retriever. For reasons unclear to the audience—either because he wants to impress a junior-high girl we never meet, or because he wants to forget about his Mom’s (CYNTHIA STEVENSON) search for a new husband—Josh tries out for the football team. Buddy, ever trusty and loyal, follows Josh to the field and runs with a football like a frisbee. That’s the gimmick of this movie; the dog’s a quarterback.

Guess what? The gimmick doesn’t work.

Reportedly, the first “Air Bud”, was a true original who really did bob those basketballs into the net. Unbeknownst to the audience, Air Bud died of cancer last year and was replaced by difference four dogs. In other words, there’s a lot of trick photography; and, it’s really dishonest and mean-spirited to present Buddy as something he’s not. That’s lying—and lying to children is especially low.

Take away the dog, and there isn’t much left to this movie. Josh’s Mom attracts the attention of a local veterinarian—gee, how convenient—who just happens to be the same vet Josh takes Buddy to. Parents, please be advised that Josh’s Mom always wears black lipstick, black eyeshadow, and black dresses when going out on dates; also, be advised that there isn’t much of a mother-son relationship. This movie sends a lot of mixed messages to single Christian parents.

And, here’s the trademark of a really bad kid’s movie—if the producers don’t have enough confidence in their story, bring in a couple of bad guys just for laughs. (See “Dennis The Menace” or “Mr. Magoo” for more examples of, “Well, we don’t have a story, but hey, how about these bad guys?”) Parents, take note: animal cruelty is played for amusement by some disposable Boris-and-Natasha type villains (NORA DUNN and PERRY ANZILOTTI), kooky Russians who steal animals for their zoo. At a time when Christian missionaries are bringing the Gospel to the former Soviet Union, it’s really tacky to stereotype Russians as such idiots. It’s not funny.

“Air Bud: Golden Receiver” is rated “G” despite occasional vulgarity and pervasive animal abuse. There is no other violence, profanity, or offensive content. Parents, please don’t let your children “copycat” this movie and throw footballs at the family dog. (And, be forewarned, there’s a scene where football players all pile onto Buddy… a particularly alarming image for a G-rated movie.)

Bottom line: When there’s much better-quality—and moral—family movies like “The Parent Trap” and “Madeline”, why would any Christian parent subject their children to this?

Sweet, likeable…
I just came from seeing this movie. I personally liked the movie and I am 32 years old. No it didn’t have a lot of imagination, but hey, life is the same day in and day out. The characters in this movie are sweet. The son never talks back, or yells at his sister. He is always polite to his coach and friends. The little girl also never talks back or calls her brother names. True, Mom, could have dressed more like a lady, but you must remember in the original movie, Mom looked a little more motherly. As for lying to children, I think you’re being rather harsh with these words. Children should always be told that movies are for the most part fantasy. I also saw “Madeline”, and although I thought it was wonderful there were more objectional things in it than in this movie. Maybe you ought to watch “Air Bud” one more time.

Sheila Proffitt
“A fun movie”…
Wow, I had a very different impression than the reviewer. I took my 10 year old daughter to see “Golden Receiver” and we both found it very enjoyable. It’s not a “deep” plot, but who expects one or needs one for such a picture? At least, it’s one of the VERY few movies I could recommend to kids where they won’t get a Hollywood dose of swearing, illicit sex, and explicit violence. The “animal abuse” by the bad guys was largely implied, and the pile on scene was only momentarily alarming until immediately thereafter we find that Bud is basically OK. I appreciate the reviewer’s intense concern for animals (I take insects outside rather than kill them when I possibly can!), but even I also find the account of animal abuse in this movie so grossly overexaggerated as to be unbelievable—rather, the animals are the heroes of the story, and all end up in perfect health! I don’t have anything against “Madeline,” which we also saw, but my daughter actually found this movie more captivating and enjoyable.

Rory, age 42
Innocent and cute…
What movie did you see? Air Bud was a cute “G” rated movie. I took my 9 year old son, he loved it. Do you have any idea what a treat it is to take a child to the movies? It’s not something we get to do often, because most movies are so offensive. Lighten up! It’s innocent entertainment. By the way we did know about Air Bud’s death to cancer. I don’t think this was an attempt to defraud the youth of America. Did you know Lassie was a boy and there has been many dogs play that role?

Pam, age 38
Glad to take my son…
After reading the review of this movie I thought that I would not take my 5 year old son to it. Then I read the review that the mother with the 8 year old son wrote. I’m glad I did. My son and I enjoyed the movie very much. Although the lipsticks and eyeshadows that the mother choose were much too dark they were not black. The action of the characters that kidnapped Bud was the kind that appeal to young boys—a lot of slapstick and, of course, completed immersion in slime (in this case some kind of watered down fish guts). There was no swearing, no sex, a coach that said that having fun with a sport was much more important than winning, and a couple that is willing to give up what looks to be a happy future because they thought that the lady’s son would be unhappy if the mother remarried. It also put out the message that you have to trust yourself and not rely on gimmicks and superstitions to get through the game. This is one movie that will be on my shopping list.

Donna, aged 37
Like Cindy, I took my 7-year old son and we both really enjoyed this movie. It’s a shame there are not more G-rated movies out there that are produced by studios other than Disney (which I boycott).

Ina, age 41
nearly as good as the original…
You obviously didn’t see the same movie we saw. The players didn’t pile onto Buddy (The impression was made; but Buddy made it into the end zone and scored the TD unharmed). I personnally did not like the movie as much as the first one, but I thought it was nearly as good as the original movie. My kids (ages 9, 7 and 5) and wife loved it. True, it was a similar storyline and the villans were silly at best; but, we thought that the movie was entertaining…

Robby, age 37
very enjoyable…
Are you sure we saw the same movie? I took my 8 year old son to it and we both enjoyed the movie very much. We have a golden retriever and it was fun to see one play football. Maybe you need to lighten up a little bit. There is so much trash and filth out there, and G-rated movies are hard to come by. I would recommend it.