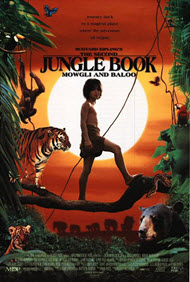 Officially titled “Rudyard Kipling’s Second Jungle Book: Mowgli and Baloo,” this movie stinks, anyway its titled. Roddy McDowall does a good job in his small part as the eccentric King Murphy and “The Rocketeer”’s Bill Campbell is more than adequate as a circus scout, but even their combined acting talents can’t help the TERRIBLE script.

The jokes aren’t funny and there are many incongruities. For starters, this ill-conceived production shows a panther breathing steam next to three humans who aren’t (huh?). A 50 pound kid drags a 195 pound man by a rope. An overweight guide falls over a dozen times but when he won’t help find Mowgli, the other guide is upset (as if he needed his help). On the positive side, I felt that the animals were nice despite the low-budget. (I am a big fan of wild beasts.)

There isn’t much (bad) language, and while I didn’t want (to see) killing, they unrealistically avoided it. There is no nudity or gore. Unfortunately, the best thing about this were the trailers before it. Rent if you really like Bill Campbell or Rudyard Kipling. Otherwise, use the time you’ll save to begin work on a movie script of your own. There’s a good chance you’ll outdo this one!

…It seems that the review concentrated mostly on the “illogical” scenes. The comment about Mowgli dragging a 195 lb. man by a rope is explained later. The organ grinder says, “I dare say he has been eating raw meat too be so strong.”… Also, the reviewer failed to comment on one scene with a bad word.