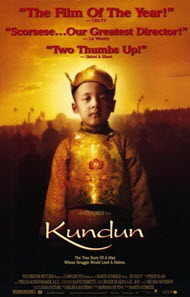 If you are an art film buff, or your doctor has told you that you simply must slow down, “Kundun” could be just the movie for you. Martin Scorsese’s latest offering is luminous with the beauty of its costumes and truly spectacular cinematography, and as slow as cold molasses, befitting its winter 1997 release.

The story begins in Tibet near the Chinese border where a little boy is growing up in humble circumstance, but with the cutest dimples and winningest smile you’ll ever see (inside or outside of Tibet). Arriving on the scene riding worn-out horses are some rough but kindly monks who, after rudimentary testing, declare the boy to be the reincarnation of the human manifestation of Buddha, none other than the fourteenth Dalai Lama. So begins this slightly historical, mostly Lama-lovefest of a film, portraying the early life of the Buddhist holy man up until his exile to India in 1950.

All of the actors in “Kundun” are Tibetan exiles, but acting is not its focus. The beauty of the Dalai Lama’s character and the “spirituality” of his every utterance, as conveyed by screenwriter Melissa Mathison (“E.T.,” “The Black Stallion,” wife of Dalai Lama supporter Harrison Ford) are key to this second in a trilogy of Lama-loving films, beginning with 1996 “Seven Years in Tibet,” and finishing up with “Windhorse”, a low-budget release dealing with contemporary Tibet, due out in late 1998. Tibet or not Tibet. That is not the question in Hollywood these days. The Dalai Lama has supporters everywhere, from Richard Gere to Jean Kirkpatrick, and a Nobel peace prize thrown in just for good measure (and its $1 million value, I suppose). So, he’s in good hands and unless you are a devotee of Philip Glass, and of the long mournful honking of Tibetan horns he uses to such advantage in this long, sloooow score, you may rather stay home and watch the grass grow.

“Kundun” is rated PG-13 for a few brief violent images. I’d take my teens to see it, but for the boredom factor.

Editors note: Even though there is little offensive material to Christians, be sure to recognize “Kundun” has been recognized by some to promote Buddhism. For more information, you may want to explore the following material:

I am a devoted Christian and a loyal follower of The Lord Jesus Christ and His teachings. I see “Kundun” as a story of a good and wise person who influenced many as he too upon a great responsibility. It does not promote or push the idea of Buddhism to anyone but it does educate people on what Buddhism looks like. Don’t get me wrong, I’m not up to converting or anything but I must give the religion some measure of respect… maybe one day God will reveal to them the truth and they will adjust to better serve Him…

Kris Pasaba, age 21
I think it is completely ignorant to say that the Dalai Lama is in good hands. He may be of a different faith, but as Christians we are called to love all people. I hardly think that allowing the oppressive government of China (which, in case it makes you feel better, oppresses Christians as well) to rape, murder, and exile the Tibetan people from their homeland is good stewardship. The bottom line is that Christians must be aware of current political issues, not only the ones that directly affect you, but the issues all over the world. Continue to pray for the liberation and salvation of the Tibetan people. And as far as not seeing a film just because it promotes a different religion… remember that the only way to strengthen your faith is to question it.

Rebecca S. Ray, age 18
I think it’s truly ironic a film about religious persecution is being criticized as “propaganda” by so many Christians. Does it escape the realm of possibility that many Buddhists may one day know the Bible and Christian faith? The Catholic film office listed “Kundun' in its Top 10 of 1997, and deservedly so.

Brian, age 24
This movie tries to follow in the foot-steps of “7 Years In Tibet” and does it miserably. The movie is beautifully photographed with scenery that takes the breath away but also includes some gorey scenes that are definitely not suitable for children. There was no sex, no profanity, and certainly no interest on my part to watch a movie which apparently was produced for the sole purpose of promoting Buddism. The very last of the movie, if you can sit through that long does nothing but vomit out propaganda about the worhsip of buddah. A movie for Christians? No way… save your money and your time.