What evidence has been found of the Egyptian king, Shishak?

The name of David, Israel’s second king, ca. 1010-970 BC, appears in two ninth century BC texts, the Tel Dan Inscription and the Moabite stone. [1] Shishak was the first Egyptian king to be mentioned by name in the Bible and is the first foreign king in the Bible for whom we have extra-Biblical evidence.

Prior to the tenth century BC, it was customary for the kings of Egypt to be referred to simply as “Pharaoh.” After the tenth century, however, a proper name was included with the title (Bible and Spade, Autumn 1993, p. 98). This practice was followed in the Bible as well. The first pharaoh to be identified with a personal name is Shishak, who ruled during the time of Solomon and his son Rehoboam. We first meet Shishak in 1 Kings 11:40. Because of Solomon's idolatry, God decreed through the prophet Ahijah that He was going to take ten tribes from Solomon and give them to Jeroboam, an official in Solomon's court (1 Kings 11:26-39). As a result, Solomon sought to kill Jeroboam. Jeroboam fled to Egypt where Shishak gave him refuge (1 Kings 11:40).

After Solomon's death, Jeroboam returned and became leader of the breakaway Northern Kingdom, while Rehoboam ruled over the Southern kingdom of Judah (1 Kings 12:1-17). Shortly thereafter, Shishak came with his army and invaded Judah and Israel. The Biblical record is brief:

The Chronicler expands on this by recording:

With 1,200 chariots and 60,000 horsemen and the innumerable troops of Libyans, Sukkites and Cushites that came with him from Egypt, he [Shishak] captured the fortified cities of Judah and came as far as Jerusalem (2 Chronicles 12:3-4).

Jerusalem was spared destruction only because the leaders of Judah humbled themselves before the Lord (2 Chronicles 12:5-8).

In Egyptian records, Shishak's name is spelled Sheshonq. Since there were later Sheshonqs, the Biblical Shishak/Sheshonq is known as Sheshonq-I.

Shishak descended from a line of chieftains of the Libyan tribe of the Meshwesh who had settled in Egypt at the end of the New Kingdom. He rose to prominence as commander-in-chief of the Egyptian army under the last pharaoh of the 21st Dynasty, Psusennes II. Shishak gained a connection to the throne by marrying his son Osorkon to Psusennes' daughter. When Psusennes died with no son to take his place, Shishak took over the throne and ruled ca. 945-924 B.C., thus beginning 230 years of Libyan rule (the 22nd Dynasty).

There was a minor resurgence of Egyptian glory under Shishak. He inaugurated major building programs in the Delta, Memphis, Herakleopolis and Thebes.

Shishak evidently had his eye on his northern neighbor for some time. By harboring Jeroboam, he was contributing to the division of Israel. When the split occurred, it was an opportune time for him to deal a major blow to the two now weakened kingdoms, so he launched a campaign. The underlying cause seems to have been to break Israel's commercial monopoly in the north and to obtain much needed booty, rather than to annex the area.

Shishak's campaign is documented in Egypt as well as in the Bible. Upon his return, he constructed a large festival court in front of the great Temple of Amun at Thebes in southern Egypt. The project was no doubt financed by plunder from Judah and Israel. On one of the walls of the court, Shishak commissioned a commemorative relief of his Palestinian campaign. Unfortunately, it is badly damaged. Enough remains, however, to show that he not only attacked Judah, as the Bible records, but also the northern kingdom of Israel.

The scene depicts Shishak on the right side about to club a group of foreigners, most likely Israelites given the context of the relief. The figure of Shishak is all but destroyed. On the left side is the chief Egyptian god Amun leading captive cities by means of ropes.

Each city is represented by an oval cartouche containing the name of the city, with a bound prisoner on top. The list mainly contains place names in Israel, the Judahite section being almost totally obliterated. Jerusalem does not appear in the list. One of the Israelite towns is Megiddo. At the site of Megiddo a portion of a commemorative stela of Shishak was found by the Oriental Institute excavations in 1926. His name can be clearly read and the stela is without doubt from the 925 B.C. campaign. 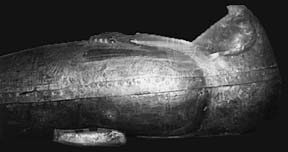 Solid silver coffin of Shishak's grandson Sheshonq-II. It was discovered in 1939 by Pierre Montet at Tanis in the Egyptian delta. The silver used to make the coffin possibly came from Judah and Israel as a result of Shishak's 925 BC campaign.

One footnote to the story of Shishak's campaign. When Shishak's son Osorkon-I took the throne, he gave huge amounts of gold and silver (383 tons!) to the temples of Egypt. What is more, he buried his son Sheshonq-II in a coffin made of pure silver. Where did all of this wealth come from? The only plausible explanation is that it came from the treasuries of the Temple and royal palace at Jerusalem (1 Kings 14:26), and other cities of Judah and Israel, in Shishak's campaign of 925 B.C.

Copyright © 1996, 1999, Associates for Biblical Research, All Rights Reserved—except as noted on attached “Usage and Copyright” page that grants ChristianAnswers.Net users generous rights for putting this page to work in their homes, personal witnessing, churches and schools.