What is “gopher” wood? 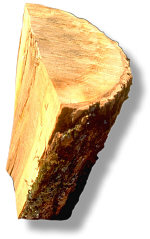 The Hebrew word גֹּ֫פֶר (G P R —there are no vowels in Hebrew) is transliterated as goper or gopher. This word is used only once in the entire Bible, in Genesis 6:14. It is a very ancient word of uncertain meaning and derivation. Moses, the inspired author of Genesis, must have known its meaning, but it has been lost to time, and it certainly has nothing to do with a small burrowing rodent.

The literal words of that verse say that God told Noah to “gopher of wood an ark for yourself.” No one knows for certain what the Hebrew word גֹ֔פֶר means in this context. In fact, we don’t really know that it was a noun, that is only assumed; it could be a verb, adjective or adverb. The King James Version and the New King James Version wisely leave the word untranslated.

As most Bible translators assume that it is a noun (although uncertain), most try to translate it with the noun “cypress.” But, although that translation could be correct, it is quite uncertain, and, as you will see, is based on very weak evidence.

Why cypress? In the ancient post-Flood world, the cypress tree was large and strong and its wood was long-lasting, which is why it was used in Judea for the most substantial elite structures (i.e., Solomon’s palace and temple).

In trying to solve the identity of gopher, some wondered if a transliteration between languages might be involved. That seems to assume that Noah supplied the original word in a manuscript that Moses possessed (but which is now lost)—which is likely, but that Moses did not know the word’s meaning and so transliterated it into Hebrew. The later seems unlikely, to me, and seems to imply doubt of the Holy Spirit’s inspiration of all Scripture. At any rate, the specific transliteration being suggested is kupar into gopher. Adam Clarke’s Commentary says, “supposing the Greek word kuparissov, cypress, was formed from the Hebrew letters G P R (gopher)… take away the termination issov, and then gopher and kupar will have a near resemblance.”

Another supposed evidence is that in the post-Flood Earth cypress once grew abundantly in Chaldea and Armenia. Armenia is where the ark is believed to have landed, in the mountains of Ararat. But no one actually knows where on the pre-Flood Earth the ark was built, and how that is related to the post-Flood world, so that is really no help.

Perhaps Noah used cypress, but we really can’t be sure. Also, cypress is far from the only guess made by rather desperate translators. Other trees and plants include pine, cedar, fir, ebony (Bockart), wicker (Geddes), juniper (Castellus), acacia (Religious Tract Society), boxwood, or slimed bulrushes (Dawson).

They are all simply guesses and may all be incorrect.

What’s wrong with all such guesses that presume to identify a particular tree or plant with gopher?

If gopher is a tree or a plant, it is not necessarily one that still exists today. Many, many plants have become extinct since the time of the Flood. We know little about the full spectrum of flora available to Noah in the pre-Flood world; extant plants and an incomplete (and far from fully-explored) fossil record are all we have to go by.

Further, we don’t know where in the wide world Noah lived. People make assumptions, but there is no reliable basis. Earth could easily have been widely populated in the 2,000 years between Creation and the Flood—mathematically based on even conservative rates of population growth. People may have spread out widely from Adam’s starting point at the Garden of Eden.

The assumption that gopher is “cypress” or any other known tree or plant—based on Noah’s supposed starting location—ignores the fact that Earth was greatly changed by the Flood. Remember that the Flood devastated the entire globe.

The pre-Flood world was utterly and intentionally destroyed by God, leaving enormous layers of volcanic rocks, diverse sediments and things buried in them (and generally changed by decomposition, pressure, heat, chemical processes and erosion. [If the concept of major geologic and geographic changes due to the Flood catastrophe is unfamiliar to you, please read: Has the Garden of Eden ever been found? and watch our film “The World That Perished.”]

All the fountains of the great deep broke up (implying massive earthquakes and splitting of Earth’s crust) (Genesis 7:11). [See: Noah’s Flood—Where did the water come from?] Such crustal movements would produce enormous tsunamis in the rising seas, producing further devastation. So massive was the amount of water involved in the Flood that it eventually covered all the highest hills/mountains of that era (Gen. 7:19).

Realistically, there is no such thing as a worldwide, tranquil flood. Such combined events would clearly produce major geologic and geographic changes. Massive devastation and erosion would occur: hundreds and even thousands of feet of sediment would be laid down during such a catastrophe (the biblical deluge lasted more than a year).

Massive destruction was clearly the point of God’s judgment: the destruction of all humans on the Earth (except those protected by the ark), the erasure of every trace of these extremely evil people and their civilization(s), starting over with the only remaining Godly family, and leaving Earth changed in ways that would make it more difficult for evil to rapidly spread and dominate the globe—as it had in the physically more paradise-like, pre-Flood world—which was much closer to the way God created it.

Based on the size of this historic event and abundant evidence in Earth’s geology, pre-Flood and post-Flood geography probably do not correspond well. This is another reason why we cannot know even the approximate latitude/longitude of the ark’s construction site.

Furthermore, the location of the ark’s landing is not very relevant. Remember that the post-Flood ark floated around for 5 months on tumultuous waters. It could have traveled far from its construction site before it landed in the uprising, volcanic mountains of Ararat.

In summary, if gopher refers to a type of tree or plant, we lack sufficient evidence to determine its identity.

It is possible that gopher refers to a PROCESS or METHOD used to prepare the wood (gophering the wood).

The bottom-line is that this ancient word remains a mystery. It is just one of many things I look forward to asking Noah about, when I get to Heaven. I’m sure he could write volumes on all the amazing things he learned, witnessed and experienced during his pivotal 950 year lifespan.


Copyright © 2001, 2017, Films for Christ, All Rights Reserved—except as noted on attached “Usage and Copyright” page that grants ChristianAnswers.Net users generous rights for putting this page to work in their homes, personal witnessing, churches and schools.