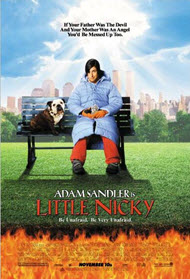 devil and demons in the Bible

If movies succeeded or failed based solely on the number of talented actors in their cast, “Little Nicky” would be one of the most popular films of all time.

Boasting such prolific comedians as Rodney Dangerfield, Dana Carvey, Jon Lovitz and Kevin Nealon, and with cameo appearances by Henry Winkler, Ozzy Osbourne, Clint Howard, Dan Marino, Regis Philbin, Bill Walton, Quentin Tarantino and Reese Witherspoon, “Little Nicky” has as much going for it as possible in the area of cast.

But instead of this comedic dream team being an asset to the film it instead establishes an aura of disjointedness where insignificant tangents are painstakingly explored and sophomoric humor blindly rules each scene.

While the frequent tangents offer an occasional distraction from the dumb, razor-thin story line, they infuriatingly lengthen this painful experience well beyond the realm of tolerance. What could have been a 70 minute experience akin to quickly ripping off a Band-Aid is prolonged to 93 minutes of anguish, much like a 10-inch length of duct tape being peeled slowly away from dense arm hair.

The ludicrous plot has Adam Sandler playing “Little Nicky,” the soft spoken third grandson of the retired Prince of Darkness, Lucifer (Rodney Dangerfield). Lucifer’s son (Harvey Keitel) now controls Hell, but his 10,000 year reign is up for grabs and he must choose one of his sons to take over. Seeing no virtue in either of his eldest sons, Adrian and Cassius (Rhys Ifans and Tommy Lister Jr.), and mindful of Nicky’s inadequacies, he passes on all three of them and reassumes the throne to the chagrin of Nicky’s siblings.

Unwilling to submit to another 10,000 years under their father’s rule, Adrian and Cassius escape Hell and begin to overpower New York, and eventually, the world. For reasons unexplained, this defiant move locks the gates of Hell and causes Nicky’s dad to begin deteriorating limb by limb until all that is left is his mouth and arms.

You are correct if you think this scenario is not funny, but asinine, however, it gets even worse when the filmmakers (Sandler included among a trio of credited writers) force a love interest for Nicky in the form of Valerie (Patricia Arquette), a mousy, homely waif who somehow falls for him despite his association with Satan. Also included in the Earthly nonsense are two headbanging dorks, an ambiguously gay roommate, a cross-dressing wacko, a talking dog and a crazy, blind street preacher. All of them offer little to the story beyond pointless, quasi-comic gobbledygook and general boorishness.

The plot thickens when—and this is one of those tangents I warned you about—Nicky discovers that his mom is really an angel (Reese Witherspoon) who jumped in the sack with Satan after consuming a few too many drinks at a Heaven/Hell get-together (try finding that one in your concordance).

If by this point your eyeballs and neck aren’t too sore from head shaking and eye rolling you will be treated to an idiotic ending where Ozzy saves the world by biting the head off a bat (I refuse to explain that one).

Aside from this film being the fourth lame film in a row about the devil, “Little Nicky” is just altogether bad. The story concept is humdrum, the crude jokes are trite and lackluster, the sight gags are superfluous and the acting is downright embarrassing. Moreover, there are very few laughs to be had in this appalling film unless you enjoy potty humor at its worst.

The only virtue this film extols is the relationship between the main character and his father. And while the story does manage to promote good over evil, it still celebrates some rudimentary decency in mankind rather than the manifest sinlessness in God as the most effective tool to fight evil. The Apostle Paul tells us that…

“nothing good dwells in me, that is, in my flesh; for the wishing is present in me, but the doing of the good is not.” —Romans 7:18

Still, “Little Nicky” has much deeper issues than this to overcome in the area of moral integrity. The Bible strongly cautions us in several scriptures regarding our attention to lewdness and impurity.

“Little Nicky” seriously lacks any of these traits.

Sandler has shown promise from time to time with more mature hits like “The Wedding Singer” and “Big Daddy” but too often he resorts to pure stupidity on film as seen in “Waterboy.” Apparently his idea of creating an impressive character is achieved by walking funny and faking a speech impediment. You have to wonder how far that shtick will take him before even loyal fans beg for a more substantive approach to entertainment.

The primary thing Sandler must avoid in the future, however, is an apparent need to fill the cast with an overabundance of well-known faces for no apparent reason, other than to make friends in Hollywood. What filmmakers usually end up, and what happens with “Little Nicky” is something like what happened with “Cannonball Run”—a meandering series of coincidental, semi-rehearsed scenes that can barely surmount the sum of their parts. And when the sum of a film’s parts adds up to nil anyway it spells big trouble at the box office.

Perhaps Sandler’s fan base will cough up the necessary cash to push this disaster over the profit hump, but those concerned with moral integrity shouldn’t bother. Not even a $1.99 video rental split seven ways would be worth it.

I can’t believe that I let Sandler’s name lure me into the theater for this 1½ hour “film.” This movie gives creedence to one of Satan’s biggest lies, that doing good alone sends you to heaven while evil deeds result in hell. Besides that falicy, the movie is full of toilet humor, sexual humor and too many blasphemous scenes to mention. The portaryals of heaven and hell made me want to weep. There wasn’t one moment when I wasn’t offended or felt comfortable.

I’m too embarassed to admit even in writing that I saw this movie. I felt sorrow for the children sitting behind me whose unsaved parents had to tell them the vulgarities were humorous (which they weren’t).

If that isn’t enough to keep your money in your pocket then the poor quality of the film should. Sandler’s offerings, while by no means pillars of morality, have at least been somewhat entertaining in the past. Not so with “Little Nicky.” The plot is lame, the characters are fools, and the scenes don’t fit together as a whole. I only laughed at the moments when Sandler threw in characters from “The Waterboy” and “Happy Gilmore.”

The only good that can come from my viewing this movie would be for my comments to keep others away from the theater. A complete waste of time, money and brain cells. My Ratings: [1/1½]

Josh, age 25
…I read the review because a Christian band I like, POD did some songs for the soundtrack [song “School of Hard Knocks”]. How sad and what a waste of time them. I am very disappointed.

Jess, age 19
…This movie was horrible, and despite my attraction to Adam Sandler movies I could not help but feel disgusted. I think the worst thing about it is that the people in the theatre loved it. They were clapping and laughing and groaning in good humor. I couldn’t help but think, “are there any Christians in this theatre?” Because if they were, I don’t understand how they could laugh at the mockery of Christianity this film displayed. What little humor I could glean from this film not already seen in the commercials was so small and so insignificant, that laughing at it was not an option. DON’T SEE IT! My Ratings: [1/1]

(M)att, age 19
Little Nicky is surely not for everyone, but I did not find it particularly offensive. While a Christian, I took the humour with a grain of salt. The film is a comedy about Heaven and Hell, not a serious work of art, whose message is meant to be offensive or to be taken personally. My Ratings: [Good / 3½]

Autumn, age 21
Comments from young people
This was a movie that no one should pay nearly 6 dollars to go and see. It portrays the christians as a joke and that should never be! I in a way made the mistake of seeing it thinking it would be funny with Sandler, but instead it was quite perverted! Don’t GO! My Ratings: [1/1]

K.T., age 17
This movie was very disgusting! It supports Satanic Worship… and it puts down Christianity. I used to be supportive of Adam Sandler and found him to be a very funny actor. However, since seeing only 20 minutes of “Little Nicky” before walking out, I have totally lost respect for Adam Sandler. I don’t think I will be supporting his movies very much anymore! My Ratings: [1/1]