for language and some crude humor. 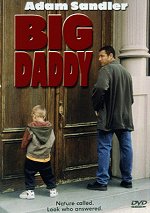 “Big Daddy” is another typical Adam Sandler movie. Humor, stupidity, and a no-thought plot. There were times when I did find some humor, but the occurance was rare and soon forgotten. The cast of characters were some familiar faces from Saturday Night Live, and some not so familiar faces.

“Big Daddy” is the story of a “loser” named Sonny who doesn’t work and is trying to change his partying, lazy lifestyle for his girlfriend and move on past high school (been there and done that with his previous movies). So he decides to attempt to raise a foster child named Julian. To help in his parenting, Sonny enlists the help of his two homosexual school buddies and an illiterate, illegal alien delivery boy.

Sonny has no clue about how to treat Julian or be a good role model, but just the same they end up becoming great pals. After completely corrupting the child, Sonny becomes attached to Julian and would like to adopt him. As the movie progresses, Sonny becomes more mature and his whole life changes. Well, maybe not.

I do not recommend viewing “Big Daddy”, unless you are a die hard Adam Sandler fan. The PG-13 rating is underrated. There are many references to certain parts of the human anatomy and not only referred by Sandler and his cohorts, but this poor child as well. They take a five year old child and make him a foul mouth and call it cute. There is also a lot of swearing. I guess it got the PG-13 rating because there is no sex or actual nude bodies, but many references to both. Don’t bother with this one.

In the beginning of this movie I was not sure if this was going to be as good a movie as it appeared on the previews. It did get better and I’m glad I saw it. …Overall, this movie is okay. It does have a lot of cursing in it. No mentions of the “f” word. There are many sexual comments. For example Kevin’s girlfriend worked at Hooters and Sonny always teases her about it. He also calls her big boob Magee. In the beginning they show Vanessa (Sonny’s old girlfriend) in her bra after she gets up out of bed with him. There is no nudity, no violence but sexual comments.

Amy Havlicsek
…this film is NOT for children. There are several uses of the Lord’s name in vain (including the five year old child). There is a homosexual couple that is very flamboyant and in one scene they kiss (heavily). I was very disappointed in the film and its complete lack of values. There were several reference throughout the film to “hooters”—both the restaurant and the female anatomy. The final scene finds the characters in a Hooters bar with the children! Personally I don’t believe Hollywood should make a film with a 5 year old in it if 5 year olds can’t go see the film. Be very careful, don’t take you children to see this movie.

Wayne Ilfrey
Comments from young people
Positive—“Big Daddy” is a pretty funny Adam Sandler movie. I would not say it’s very offensive; I would say that it is average (which means somewhat offensive). Sure it has some crude moments, but, overall, it’s a funny movie, that has heart. It’s not just a stupid comedy, but a stupid comedy with heart. I would give it *** out of 4.
My Ratings: Moral rating: Average / Moviemaking quality: 1½