Will there literally be a burning fire in Hell? 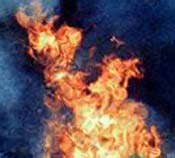 In Mark 9, notice that the Lord Jesus repeats three times about Hell, “where the worm dieth not and the fire is not quenched.” Now, I personally feel that it is a great waste of time to quibble and argue with people about whether it is literal, real fire or not. And it seems there is some reason for saying that it need not necessarily be a real fire, or that this is a literal, real worm that is referred to here. But it is interesting to note that one of the Bible words used to describe Hell is Gehenna, and that referred to the garbage dump of the valley of Hen (Hinnom), where there was fire constantly burning, and the worm and maggots never lacked something to eat. They were always alive, always in existence.

Will there literally be a burning fire in Hell? The fact of the matter is that if this is just symbolic language, it’s bad enough for me, and certainly the reality will be worse than the symbol. And fire isn’t very funny. If you’ve ever been badly burned, as I was as a little boy, you never forget it. And if the Lord is simply using symbolic language, how much more terrible must the reality be?

You don’t need fire to be in pain.

Now, I don’t think physical suffering is the worse kind of suffering. We know that when Jesus was on the cross He took and an awful lot of abuse. He was spit on and mocked. They pushed sharp thorns down into His head, shredded His back with the cat-o’-nine-tails, drove the nails in and the spear. He was even deserted by His own disciples. The physical suffering was great. They even plucked the beard out of His face. But you never hear the Lord Jesus complaining about any of that. Rather, the peak of His agony and His suffering is when He cries out, “My God, my God why has thou forsaken me?”

The real pinnacle of suffering for Jesus was to be God-forsaken and to be left alone. That hurt more than thorns and thistles and spears and nails and whips and spit and all the rest—to be God-forsaken. [see: How did Jesus Christ die?]

I honestly don’t think that those of us in America can appreciate or understand that as much as some missionaries who have gone out to some of the most primitive parts of the world, where some have told me that the spiritual darkness is so heavy you feel you could cut it with a knife. The presence of the Demonic and the Devil and the powers of darkness are felt keenly. We can’t really understand what it would be like to be in a place where the hard Satanic atmosphere has not been broken, shattered, or in some ways penetrated through the persistent preaching of the Gospel.

When we read in the Old Testament, “The soul that sinneth, it shall die” (Ezekiel 18:4), really the idea of the word is that it shall be separated. It is not non-existence or annihilation, but rather it is separation from God.

When Jesus said,“why has thou forsaken me?” that was the height of the suffering.

In Hades, what do people remember?

Returning to Luke 16, and the story of the rich man and Lazarus, I’d like to mention that there is no indication here that this is a parable. It doesn’t start out like a parable, but says, there was a rich man, and a man by the name of Lazarus, specifically named. Parables don’t usually take that turn. And the one was carried to Abraham’s bosom and the other one was a lost soul who went to a place of punishment and torment. But I want you to notice in this story that when the rich man was in eternity without God, without hope, his memory was very much alive. He said, “Send Lazarus to give me a little relief.” At another point he said, “Send him to tell my five brothers, lest they also come to this place of torment.”

Every once in a while, you’ll hear somebody say concerning some member of their family whom they know is unsaved, “Well, if he’s gone to Hell, or she’s gone to Hell, I want to go there and be with them.” I’ve got news for you—they don’t want you there. The rich man said, “Go tell my five brothers, lest they also come to this horrible place.” He got very missionary-minded and very evangelistic a little late in the game.

What did the Lord say to him? “Son, remember that thou in thy lifetime had thy good things.” I don’t really think we need to talk about fire. I think one of the most horrible, terrible features of eternity without Christ would be to have your faculty of memory—to remember the gospel services you sat through and kept saying “no” to Christ—to remember your hardness and coldness of heart to somebody that was a testimony—to remember your indifference—to remember programs and meetings in which you emotionally were stirred and maybe tears came to your eyes and a lump to your throat, and you said “No!” to Christ. I can’t think of anything that would be more horrible than that. “Son, remember.”

You don’t need fire to be in pain. You don’t need physical suffering. Just to be God-forsaken—separated from God and all that is good and holy and to have your memories along with it. To remember a mother and dad who prayed for you, who tried to lead you right. You took the bit in your mouth and decided to go your own way. You wouldn’t listen. A horrible thing memory can be if we’re outside of Christ. “Son, remember.” And evidently, man in eternity could see, he could remember. He didn’t need to have fire to make him uncomfortable. There were plenty of other factors to make Hades and Hell very unfunny. To be out in eternity without Christ is very unfunny.

Copyright © 1999, Grace Communications, All Rights Reserved. Printed copies of the booklet Hell: Fact or Fiction are available from the copyright owner.