for street racing, violence, language and some sensuality. 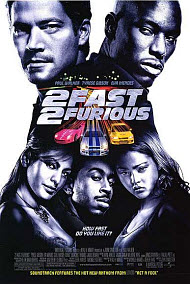 When The Fast and the Furious raced into theaters in the summer of 2001, not much was expected from it. However, the movie rose above the box office charts in a weak summer and became a smash hit. The movie’s blend of fast cars, cool guys, fast cars, attractive women, and fast cars made it the film to see among the teenage guy crowd. I have to say, I found it stale, dull, and uninteresting, with the only high points being a couple cool racing scenes and the good screen presence of Vin Diesel, in the film that made him a star.

Imagine my great lack of excitement then, at a sequel without Diesel and with, well, everything else. “2 Fast 2 Furious” actually is a good deal better than the first film, but in the end it’s just 2 senseless, 2 flat, and just plain not 2 good.

Returning for the sequel is Paul Walker, who reprises his role as Brian O’Connor. A former LAPD undercover cop, O’Connor lost his badge in the first film after allowing his friend, high-speed bandit Dominic Toretto (Diesel), to escape the police. When we pick up in “2 Fast”, O’Connor has taken up residence in Miami and hit the local street-racing scene.

Things are looking good, as he’s known around town as the man to beat. But, he gets busted after a race, and then is presented with a deal by the FBI. A big, nasty, drug lord (Cole Hauser) is looking for some fast drivers to make a delivery for him, and O’Connor is told that if he goes undercover, does the run, and helps make the bust, his record with the law will be wiped clean. He takes the deal, provided he can choose his own partner, who he finds in disgruntled childhood friend Roman Pierce (Tyrese Gibson). The two team up with the cartel, including Monica Fuentes (Eva Mendes), the possibly compromised under cover FBI agent posing as the drug lord’s mistress.

What follows is plenty of undercover scheming, smooth-talking, fast-driving action. Unfortunately, it just can’t quite add up to an entertaining movie.

First things first, I found Paul Walker unbearably bad in the first movie. The only character remotely interesting in that film was the Vin Diesel character, who is not in this movie. We’re left with Walker, who, though not as poor as in the first film, is still a pretty bad actor and makes Brian O’Connor a really lousy main character.

If the producers would have dumped Walker and made a sequel about Diesel’s character, that could have been interesting—but that’s another discussion for another time.

Thankfully, like Diesel in the first film, we’ve got a supporting actor with solid screen presence in Tyrese Gibson. Tyrese brings realism and enjoyment to every scene he’s in, something Walker just doesn’t do. He’s charming, funny, cool—exactly what a movie like this needs. It just needs a main character like that. Bad as Walker is, though, Gibson makes the film bearable.

The rest of the male characters are pretty sketchy and worthless (save for a decent role by rapper Ludacris), and the females in the movie are more objects than characters, an aspect to the movie I found rather disgusting.

The action (which is, after all, what the movie is pretty much about) is actually pretty good, much improved over the original. Director John Singleton films the races/chases with a sleek, cool cinematography that shows off the colorful cars and high speeds. However, the endless use of the nitrous oxide boosters got old in the first movie, and it really feels tired in this one. Something new would have been nice.

Also, even though this type of film isn’t really concerned with realism, could the filmmakers have tried a little harder? Though some of the over-the-top stunts were fun to watch, I found it absolutely absurd that these guys could block off huge lengths of streets in urban Miami to hold their illegal street races, and go unnoticed by anyone (police aside, there is NOBODY anywhere to be seen) until the police conveniently bust in right after the race ends.

In the end, we have a movie that’s not really all that bad, is better than its predecessor, but finally comes up just short of being a good movie. Ironically, I think the film would have been better had it not been a “Fast and the Furious” sequel. If Singleton didn’t have Paul Walker and the fans expectations to deal with, he could have done a nearly identical movie with Tyrese Gibson and a slightly tweaked story and made a decent film.

Yet, what we have is what we have, and that’s a movie that can be filed under “almost, but not quite.” Considering the first movie, that may be a small victory in itself.

The film is rated PG-13 for street racing (that pretty much sums it up—lots of speed and crashes), violence (limited to only a couple scenes, not all that graphic but somewhat tense at one point), language (more persistent than graphic, pretty standard considering the rating and circumstances) and some sensuality (a lot of MTV-style scantily clad ladies, some dialogue, but no real sexual scenes). The movie is about illegal street racers and running from the cops, but this is more in the fantasy vein (similar to a heist film) than anything else. However, this, along with the mature content, certainly makes the film inappropriate for those under thirteen, as the rating suggests. A more mature teenage and adult audience should view the film with discretion.

Positive
Positive—As a director, producer, film maker, viewer and a very open minded Christian who holds no bad thoughts about any film, I’d have to say that 2 Fast 2 Furious is a film designed for pure excitement and enjoyment. It doesn’t have a real plot or morals. It’s not supposed to. In fact, the film was purposely designed to be entertaining. Especially to real street racers from around the world. I believe that this film was aimed at an audience who knew what they were getting into when they paid for their ticket. It’s a street racing movie that is pure entertainment…
My Ratings: [Good/5]

Brian “Burner” Kai, age 27
Positive—This is entertaining, escapist fare. Christopher Walken plays a great bad guy. There is not a whole lot to ponder. Some likeable characters die, but you don’t get to know them too well in the fast-paced style of movie this is. There are some unnecessary sexual references. Don’t see to be intellectually challenged. If you want to laugh and see some well choreographed fight scenes, this one is okay for you.
My Ratings: [Average / 4]

Mark L. Gilliam, age 41
Positive—This movie is fine for children over 13. They do cuss a few times and there are a few violent images, till I would rate this as better than average.
My Ratings: [Better than Average / 4½]

Sally, age 40
Positive—My wife and I went to see this movie without expecting much. We left saying we have got to own this movie. My wife hates Dwayne “The Rock” Johnson but she left saying “I really wanted to hate this movie, but I loved it.” The movie is funny, and has some of the best action I have seen in a movie all summer. However, with action always comes violence, and bad language. Beware of these elements in the movie before you go see it. I loved the movie, and have recommended it to my friends!
My Ratings: [NA / NA]

Jon McCann, age 25
Neutral
Neutral—This film was an intense ride! It was so amazing; I loved it in everyway. They could of lightened up on the sex in the plot. But still a truly enjoyable film!
My Ratings: [Average / 3]

Comments from young people
Negative—I’m not a huge fan of the “Fast and the Furious” movies but, “2 Fast 2 Furious” is a lot more appropriate than the first movie. This movie has almost no sexual scenes or nudity. The only kind of suggestive scenes are just what some of the woman are wearing. (Which is like a bikini or tight pants) This movie however is not a very good influence on teenagers who now can drive or who are about to get their license because most of the movie is about street racing and breaking the law.
My Ratings: [Very Offensive/3]

Cole, age 12
Neutral—This film, in its entirety, is meant for the adult audience and has very little if any moral value. I did however, think that this movie did depict the idea of good versus evil in that the “bad guy” goes to prison in the end. If you are looking for a film that promotes strong Christian values, I would not recommend seeing this movie.
My Ratings: [Average/3½]

Kimberley, age 17
Positive—This was a pretty good action flick if I do say so myself. If you are a fan of car chase movies, then go out and see it. However, this is a movie about illegal street racing. I wouldn’t take a kid under the age of 12 to see it. If you have a kid under that age and want to take him to a cool action movie, I would recommend seeing “The Italian Job” instead of Fast and Furious. But if your mature enough, then check out this adrenaline rush! As far as the content goes; the violence and language are normal for a PG-13 flick, and there are no sex scenes (praise God!), just some women in tight bathing suits and one scene where a man grabs a lady’s booty. But that’s basically it.
My Ratings: [Somewhat Offensive / 2½]

Chris Fleming, age 14
Neutral—…Lots of cursing, using God’s name in vain, scantily clad girls, some violent scenes… But these are the low points of the movie. I loved the car races/chases, the cars themselves, and action. But still, I didn’t walk out of this movie like “wow, I wanna see that again!.” It’s kinda what I expected. Worth a look, but not anything really special. I would give this movie is a “mild” R rating.
My Ratings: [Average/3]

Jake, age 15
Negative—I hated that movie, I didn’t see the point in what it was about! I was it with a friend, she LOVED it! But you have to understand, she is not a Christian. I do not recommend it at all!
My Ratings: [Extremely Offensive/1]

Jamie Souder, age 17
Neutral—This Film was Ok, but, I don’t recommend it to younger children under 15. I thought it was pretty good except for the fact that a lot of it had to do with sexual content and foul language so I think that this movie was meant for adults and older teens!!!…
My Ratings: [3]

Jade Sutterfield, age 13
Movie Critics
…This is simply a good popcorn movie that is entertaining. There’s a guilty pleasure in watching characters race fast cars on the streets—something most of the rest of us will never get a chance to do. But isn’t that why they call it entertainment?

Holly McClure, Crosswalk
…There’s not enough driver’s ed in the whole world to compensate for what teens see glorified in “2 Fast 2 Furious”. Get in the car and drive away, fast.

Steven Isaac, Focus on the Family
…“2 Fast 2 Furious”,” a.k.a. “2 Much, 2 Loud, 2 Dumb,” has enough action to satiate fans of this sort of vehicular mayhem, and Tyrese certainly makes it easier to watch. Nevertheless, neither of those points can compensate for the problems and shortcomings that this recycled effort offers.