for sequences of violence and action, and language. 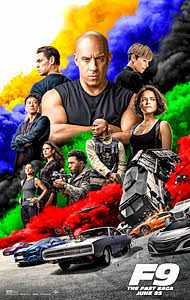 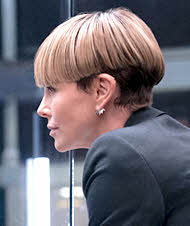 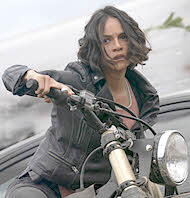 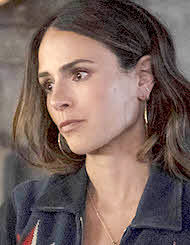 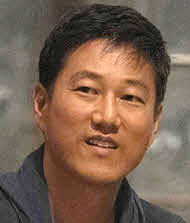 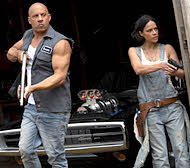 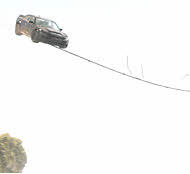 “No matter how fast you are, no one outruns their past.”

Dom and Letty have decided to settle down and live an easier life, with their son Bryan, one that doesn’t involve fast cars, guns and blowing stuff up. But, as usual, the quiet life doesn’t stay quiet for long, when members from Dom and Letty’s old crew appear unexpectedly with an important video: Mr Nobody’s (Kurt Russell) gone missing. It gets worse than that though.

Whoever is behind Mr. Nobody’s disappearance also kidnapped Dom’s archnemesis, Cipher (Charlize Theron), as well as half of a device called Ares, that . allows the user to take control of all the different countries’ warheads and launch them whenever they feel threatened. If the enemies get their hands on the other half of Ares, it’s game over for everyone.

Dom (Vin Diesel) has faced difficult odds, sure, but what will happen when FAMILY is the thing he has to face?

There’s something to be said about a franchise that has lasted as long as the Fast and Furious series. The first film came out in 2001. In the past twenty years, the franchise has produced over 9 main films and one spin-off feature film (“Hobbs and Shaw”). For the past several weeks, I’ve asked myself the question, why is this series as popular as it is. Is it the action? The acting? The story? What keeps it going?

Perhaps, truthfully, the fans are the heart of the franchise. They are the ones that allow the films to continue to be produced. And since the fans were faithful, so was Universal. So more Fast and the Furious films continued to be made. In the beginning, the first movie was, indeed, all about racing and the cars. It wasn’t until, I think, around the 4th or 5th movie, it became more character and story driven and racing being just a part of it (but maybe that’s just MY take on it).

I say ALL of this because in “F9” we have a LOT of story and character development in, perhaps, the first half of the film and the action doesn’t really pick up much until the last quarter. When the action occurs, though, it’s intense, sure, but it’s a bit too unrealistic (such as when a guy is on a truck and his head goes through a billboard like it’s paper, and he doesn’t feel anything). At one point, even the characters joke about how they always come out of each of their adventures without a scratch on them, like their invincible.

I could forgive all that, truthfully, if the film didn’t rely on some of the same story-telling plot points and mechanics it did from the previous films: a family member is used as a villain to add tension to the overall situation (not a spoiler, I promise), Dom’s gang has to stop some bad guys from stealing a device that can destroy the world, Dom’s being called to saved the world but doesn’t want to, etc.

To be fair, the action is great and the performances are terrific. You have a stellar cast to work with, as has been the case throughout the entire franchise. Overall the pacing is stellar. At first I thought two and a half hours would be too much, but it didn’t feel overly long. Setting-wise, I loved how the film took us to different parts of the world as well. I just wish the film had had a little more originality.

Violence (partial list): This is the most violence I have seen out of all the films in the franchise. Mutliple scenes involve gun fights, fist fights and car chases with explosions. Cars explode while driving over mines. Fights inside vehicles result in people being tossed out of cars. Cars plow through entire bottom floors of buildings. We watch as a truck plows through hundreds of cars. A character brings down a wall which falls on him and bad guys. A person explodes while flying in a parachute. We see a character hit by a car. A character is killed. In a post-credits scene, a bloodied man is seen inside a boxing bag that is being heavily punched and kicked.

Sexual Content/Dialog: There are two innuendo conversations about people “compensating” for something. The term “balls” is used for male genitals. A man says about a woman, “I feel creeped out and sort of turned on at the same time.” A heterosexual kiss.

Other: Someone says “they threw us in jail because we were brown.” Someone steals a necklace.

One of the strongest things about the Fast and the Furious franchise is it’s commitment to always having a common theme. Throughout the series Dom’s motto has always been, “Never turn your back on family.” Yet, through a series of circumstances in the past with his brother, that I won’t get into, he DID turn his back on him and it affected his future.

The theme of this particular film is forgiveness and the consequences of not forgiving. In Dom’s inability to forgive his brother, it affected any future relationship he might have had with him, and also stirred absolute hatred towards him.

Scripture is clear on how we are to forgive one another because it is the EXACT thing Christ did for us by paying the ultimate price on the Cross.

“Be kind and compassionate to one another, forgiving each other, just as in Christ God forgave you.” —Ephesians 4:32

“Bear with each other and forgive one another if any of you has a grievance against someone. Forgive as the Lord forgave you.” —Colossians 3:13

“And when you stand praying, if you hold anything against anyone, forgive them, so that your Father in heaven may forgive you your sins.” —Mark 11: 25

“For if you forgive other people when they sin against you, your heavenly Father will also forgive you.” —Matthew 6:14

Every film franchise has its fans that, no matter what, will defend their film franchise to the grave. I say this because, truthfully, for “F9,” I feel only the die-hard fans of the franchise will likely be the ones who appreciate what this film has to offer. Then again, however, some may be wondering if the franchise is starting to lose its momentum, as the story line seems a bit recycled from previous films and the stunts are beyond ridiculous, to the point where the teenage boys in front of me said, “No way.”

Content-wise, this film is questionable. There’s plenty of vulgarity and profanity to go around, and the violence is a bit stronger than in previous installments. However, there are some strong positive messages that make their way into this movie that didn’t quite resonate as well in the previous films.

Overall, I’d say this isn’t the best choice for viewing by Christians but it isn’t the worst either. Definitely leave the little ones at home, teens and adults only. Ultimately the choice is yours.