for sexual content, drug material, language and some thematic elements 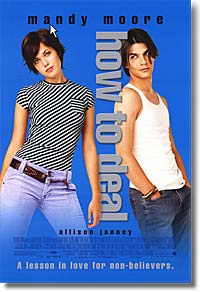 What are the Biblical guidelines for dating relationships? Answer

See our Questions and Answers for Teens section…

See our help for families section…

What was promised in the previews is pretty much what we get in this Mandy Moore vehicle. Moore’s character, 17-year-old Halley Martin, is surrounded by abnormal or dysfunctional romances, and is soured on the whole idea of entering a male-female relationship and becoming vulnerable to being hurt. Then that special guy comes along; and she must decide whether to stick to her guns and maintain the emotional wall she’s built around herself, or to follow her heart.

There are no deep plot twists, since there’s no deep plot. There are, however, a number of surprising turns taken by the mostly single-dimensional characters. At its lowest level, this mixed-genre chick-flick is just chewing gum. But it does have its moments.

Moore and the rest of the cast turn in more-than-competent performances, and the cinematography and editing are good. Background music as a mood-setter isn’t overdone. The use of “Wild World” by Yusuf Islam (Cat Stevens) near the end was effective and a nice touch, although they ruined it (for me) by playing a harsh-sounding cover version a few minutes later in the roll-up credits.

Perhaps this is a spoiler, but it’s fairly easy to guess that Halley DOES finally decide to take a chance on love. This perfectly normal and routine choice is made to appear more special than it is, due to the wealth of weird behavior all around her. Her soft rock DJ dad is in middle-age syndrome and has dumped her mom in favor of a young co-worker. Her mom at first distrusts all men; but then she falls for a Coke distributor (Coca-Cola, that is) who looks good in his Civil War re-enactment outfit, and she apparently has sex with him on the sneak. [See: What does the Bible say about adultery?]

Halley’s older sister is engaged to and constantly fighting with a man from a snobby rich family; in one scene she comes home drunk from her bachelorette party with a male stripper’s g-string around her neck, and passes out on the porch. Halley’s best friend in high school, who also lives with a divorced mom, fools around, gets pregnant, tragically loses her boyfriend, and must resist pressure from her mother to have an abortion. [See: I am not married, and just found out I’m pregnant. What should I do? Answer]

And finally, Halley’s grandmother is a split personality. In regular mode, she dispenses wisdom. In high-on-marijuana mode, she sees things that aren’t there.

Objectionable content (in addition to the above): Halley and her boyfriend are seen making out and beginning to undress in a couple of scenes, and other couples are briefly seen in similar activity, but no explicit nudity or direct sexual touching is visible. Since sexual tension undergirds the storyline and pops up many times, it’s debatable whether the sexual content should be considered average or heavy. It’s not R-rated material, but it’s not family-friendly either. For the teen female target audience, it constitutes dangerous imitative behavior; especially so since Halley likes kissing and fooling around with her boyfriend but is dead set against opening up her heart to him. [What is true love and how do you know when you have found it? Answer / What are the Biblical guidelines for dating relationships? Answer / My boyfriend wants to have sex. I don’t want to lose him. What should I do? Answer]

Many characters use harsh language: there’s one f*, a few s*, other profanity and vulgarity, cursing and misuse of God and Jesus. There’s on-screen tobacco smoking, marijuana smoking, drinking and drunkenness. One on-screen death from natural causes, and a car accident resulting in injuries. Several bad attitudes and cutting remarks. Halley disobeys her mother and talks back to both her parents. These behaviors are not glorified and are mostly portrayed in a negative light, although some are used for comic relief.

My pet peeve, here and in other films where it occurs, is Halley’s statement along the lines that marriage vows (the promise to “love” the other person) constitute lying to the other person and to yourself, because you can’t predict how you’re going to feel in the future. Whenever movie characters say that, I’d like to pound some sense into their silly heads. This real-life problem, which has contributed to countless divorces, is one of mis-definition.

The word “love” in English is a catch-all. It’s used to translate such diverse concepts as sexual desire, friendship, and unselfish devotion. People even say they love ice cream or love revenge, which don’t fit any of the above three choices. Christian husbands are commanded to love their wives (Eph. 5:25-33 and other passages), and wives are likewise commanded (indirectly) to love their husbands (Titus 2:4). It should be obvious that in these passages, and in marriage vows, the meaning of “love” is unselfish devotion. Sexual desire can’t be commanded. Emotional attachment can’t be commanded. Being “twitterpated” (like in Bambi) can’t be commanded. But a person can be commanded, and can decide, to make a lifetime commitment to seek the welfare of another person, regardless of what “feelings” are or are not there.

Making and keeping that commitment is one of the essentials of marriage. But every day, people enter into marriage without understanding clearly what’s being asked of them.

If, during this film, someone had addressed Halley’s misconception and set the record straight on what marital “love” is, I might have tolerated a lot of the objectionable material in return for that nugget. Does it happen? Not really, but kinda sorta. There’s a scene near the end where Halley’s boyfriend proposes that the two of them in effect stand shoulder-to-shoulder and fight back against the world’s assaults on their relationship. That’s a nice example of mutual commitment, although it’s not directly labeled “love.” The other positive element is Halley’s friend choosing to keep her baby.

Is the average family as messed up as the characters in this film? Based on my experience in ministry and in health care, I’d say no. Things are getting worse all the time, but they’re not quite this bad. Of course, Hollywood’s repeated portrayal of these kinds of characters as though they are “average” tends to weaken society and therefore become a self-fulfilling prophecy. The youngest viewers of this film should be old enough and mature enough to know that real life isn’t quite like this. That means an age somewhat higher than thirteen.

Review reprinted with permission of www.charitysplace.com

Negative
Negative—Although the quality of this movie is very good, parents should be aware that it does not set good examples for our children. Mandy Moore’s character is a high school student who walks in on her best friend having sex, who wants to “fool around” with her boyfriend without falling in love, whose boyfriend skips school, who sneaks out of the house at night for boyfriend rendezvous, whose mom also sneaks out at night to have sex with her own boyfriend, and whose grandma continually is getting high on marijuana.

Eventually there is a very good theme of love winning out. However, parents of younger children who will be attracted to this movie because of Mandy Moore, should consider saying, “No, you are too young.” What age is too young is obviously up to each parent.
My Ratings: [Very Offensive / 4]

Steve M., age 38
Negative—I really liked Mandy Moore’s acting in “A Walk to Remember,” but was disappointed with “How to Deal”! I walked into the theater thinking it would be as nice and innocent as the other movie! It was the opposite, it features lots of sensual content and lots of talk about sex. The movie also featured lots of profanity and misuses of God’s name. …I wouldn’t recommend this movie to any Christian teen male or female, I suggest sticking to “A Walk to Remember”!
My Ratings: [Very Offensive/2]

Matt Young, age 20
Comments from young people
Neutral—This was the worst film not only was the acting horrible but there was no story. Mandy Moore was a joke. And the message it sends to teens is terrible. Basically they tell you don’t have sex if with someone you love only with a person who you don’t have any kind of feelings for besides friendship. And they make smoking pot out to so funny not something the youth should be seeing. I walked towards the end!
My Ratings: [Extremely Offensive / 1]

Katie, age 15
Negative—I am a Christian teenager, and I screen the movies I watch. I went to see this movie with my best friend thinking that it would be a cute movie about teenage love. (not to mention I like Mandy Moore’s acting) We were sadly, very disappointed. It had no great plot, although there was one, and I believe they threw too many major events into one movie. It was poor quality, there are so many other ones out there.

On top of that, *here comes a part of the movie, so stop reading if you don’t want to find out* Mandy Moore’s character Halley is so disgusted by love, yet one guy who likes her enters the scene, and Hollywood decides to push the line and bring the two to the point of “almost sex.” They get mostly undressed and then she decides its wrong to get involved to that point. Ummm… duh. Not only does this not happen in every day life, (a perfect guy walks in and changes your views about life?) but the “almost sex” scene was not even needed. And by the way, there were 3 “implied” sex scenes. They were unnecessary, ridiculous and they quenched my spirit.

Please, I would advise you not to see this movie. I really convicted when I came out, I knew I should have walked out. Really, there are better ones out there.
My Ratings: [Very Offensive / 1]

Erin Leonhardt, age 17
Positive—I enjoyed this film. I laughed, got teary-eyed, and sympathized with Halley. Many aspects of this film, although objectional to many christians, are a part of many people’s everyday lives. This is what high school students today deal with. (Hence the title “How to deal”).
My Ratings: [Somewhat Offensive / 3]

Jean, age 18
Positive—This was a very good movie, it was very real and reminded me a lot of my high school experience. There is even a point where the main character decides she is not yet ready to have sex, which is a good message for kids who feel pressured to do so though are not yet ready. Teenagers should relate to this well.
My Ratings: [Good/5]

Kat, age 18
Movie Critics
…‘How to Deal’ is that rarity, a movie aimed at teens that doesn’t insult their intelligence…

Kirk Honeycutt, Hollwood Reporter
…You could take a camcorder to the mall, videotape strangers at random, and end up with a better movie… Soggy and melodramatic…

Steven Isaac, Plugged In!, Focus on the Family