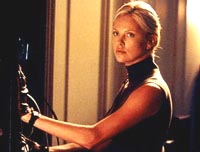 Most heist films fall into one of two categories. The first are films which rely heavily on withholding information from you so that you can be surprised by the elaborateness of the con—“The Sting”, “Maverick”, and in some ways, “The Usual Suspects” fall into this category. The second type sets up an impenetrable fortress and allows you to watch as the protagonists creatively break down its defenses—think “Entrapment”, and “Oceans 11”. “The Italian Job” is one of the latter, although it doesn’t spend much time setting up the difficulty of the heist, preferring to show its intricacy as it unwinds.

Of course, the most generic element of the contemporary, American version of the genre is the morally bankrupt antagonist from whom the loot is being stolen. American Robin Hoods don’t have to give to the poor as long as they rob from the rich, foreign, or arrogant. “It was never about the gold for me,” Stella Bridger (Charlize Theron) tells turncoat murderer Steve Frezelli (Edward Norton in one of his too-cool to-care sneering roles). As if to underscore this point, Steve gets not one but two on-screen murders, whereas our heroes allow a Ukranian mobster to do their wet work for them. The message is clear: Steve may have been one of the group, but he certainly wasn’t like them—or us. Hence it’s okay to steal from him. That the movie never deals with where the money came from in the first place is part of its moral naivet. Perhaps that’s why it’s such a surprise when Charlie (Mark Wahlberg) starts gunning his car through the sidewalk and subway, and the viewer must confront the fact that while Charlie won’t target them, innocents will die if they get in his way. Oh, they never do, but that, too, is part of the movie’s moral fantasy.

“The Italian Job” suspects that the average film watcher can’t deal with moral ambiguity (and it may be right) and so bends over backward to make the crooks morally palatable. We get Charlie’s mentor (Donald Sutherland) giving him the fatherly advice that a life of crime means loneliness and isolation; but unlike films such as “The Score,” “Heat,” and “The Godfather,” and “The Sopranos” which actually show the numbing effects of destructive choices on characters, “The Italian Job” resides in the fantasy genre which allows Charlie to have his cake and eat it too. The film’s back story tells us that Charlie has been in every job with Stella Bridger’s father, but he is willing and able to abruptly retire upon completion of his biggest score. And Charlie’s and Stella’s gleeful bantering as the mobsters tell Steve how they are going to torture him seems to show, and invite the audience to participate in, the kind of sadism that is at odds with the more frothy tone of the film. Don’t get me wrong, Steve made his own bed, as the movie bends over backwards to stress. But his fate, and the characters’ reactions to it, is typical moral hypocrisy/wish fulfillment. The characters and audience get to give full indulgence to their desire for vengeance without having to dirty their hands or think of themselves as killers.

That being said, I should underscore that as a fantasy rather than a realistic drama, “The Italian Job” works well, and I did enjoy it. While the climactic heist lacked the intricacy of “Ocean’s 11”, neither did it make me totally suspend disbelief. Mark Wahlberg as Charlie and Charlize Theron as Stella are sufficiently interesting to watch, and Norton gives a confident, if generic, turn as Steve. The latter is strangely pathetic in a scene in which Charlie confronts him with the fact that he has no dreams of his own and hence can only use the money to buy things he knows the others want. Money can’t buy happiness, but it can buy the toys that bring it. “The Italian Job” won’t win any awards, but it is a fun summer matinee movie.

Positive
Positive—I thought this was a terrific movie. There was a lot of action, and I do not recall any swearing or sex scenes. So what’s a little stealing (I’m joking). Actually, I’d much rather see $35m in gold stolen, over sex scenes and swearing any day. Acting was good and plot was great. I’d definitely recommend it.
My Ratings: [Better than Average / 4]

anonymous, age 32
Positive—My wife and I both thought it was the best of the flurry of heist movies that have come out in the last few years. I didn’t find anything too offensive in this movie, and I’m very conservative in my views and sensitive to the overall anti-Christian slant of the typical Hollywood movie. No sex scenes, no glorified homosexuals or adulterers, and little swearing. There is some violence, but really not much more than you would see in a 50s movie.

My only objection would be the glorification given to thieves, though the plot tries to soften this. I would recommend it to movie-going Christians.
My Ratings: [Average / 4]

Fred Williams, age 41
Positive—I really enjoyed this movie. I thought it was one of the best movies I have seen in a long time. There were a few curse words and no sex, which was good to see and hear. It’s hard to find a movie out like that. Again I truly enjoyed this movie and will recommend it to others.
My Ratings: [Average / 4]

Stefanie Pedler, age 19
Positive—I loved this movie! It was one of those movies that’s rare these days—where I walked out of the theater with not even the slightest hint of regret over seeing it. The story was creative, the acting was great, and it kept me interested to the last second. …

There were only two scenes of real violence that I can remember (with little or no blood), and seeing it for the first time, I only noticed one cuss word (the f-word). However, my mom, who was seeing it for the second time, noticed about 10 cuss words. I highly recommend it for anyone 14 and older.
My Ratings: [Average / 5]

Lindsay, age 21
Positive—I thought this was a terrific movie. There was a lot of action, and I do not recall any swearing or sex scenes. So what’s a little stealing (I’m joking). Actually, I’d much rather see $35 million in gold stolen over sex scenes and swearing any day. The acting was good and the plot was great. I’d definitely recommend it.
My Ratings: [Better than Average / 4]

Christine Rosburg, age 32
Positive—I love action films, and see a lot of them, and put up with the non-Christian elements. This plot was engaging, the “technology” of the heists was smart and the car chases and explosions were great. “Charlie” was an admirable leader and took care of his team. On the other hand, it was a total rip-off of “Ocean’s Eleven” and “Gone in 60 Seconds,” and “Charlie” was played as though Matt Damon was the star, and as though he should have been the star. Even so, I loved the movie; I found it funny in some places, and paid full price to see it twice.

WARNING: I have great tolerance for language, so I didn’t notice any, and watch for sex, which there was none. I get up and leave a movie if torture comes up—no tolerance—so I was ready to leave, but it was already the end.
My Ratings: [Better than Average / 4]

RJ Version, age 39
Positive—When the movie was over, all I could say was wow! The acting was believable, the action was incredible, and the storyline was inevitable. They did an excellent job making this group of kleptomaniacs (thieves) look like the good guys. I found the technology very interesting, especially the explosive paint and the 3D program they used to view the inside of buildings and do simulations of their plan. They did their jobs well, even if they were breaking international laws.

Obviously, as Christians, we do not encourage stealing at all, but for the sake of entertainment, “The Italian Job” was a winner. Oh, let me mention also that I watched the movie at home using a DVD player equipped with TVG (TV Guardian) which did an excellent job at blocking bad language. Too bad it doesn’t fix what you see, too…
My Ratings: [Average/4]

David S., age 20
Neutral
Neutral—Having seen the original film, I was expecting more wheel work, the run through the sewers was half that of the original in length and action. Also the tunes were OK, but the song “self preservation society” in the original spoke volumes on societies cold ambivalence when it comes to quick gain.

As for entertainment value, it was well worth the admission, and I think it has solid moral point to make in the last scene; “yours sins WILL find you out.”
My Ratings: [Average / 3]

Frank Da Silva, age 45
Negative
Negative—If you want to watch an “entertaining” film, “The Italian Job” is very good; it’s a high quality production. But like most films, it’s based on a complete lie—that one can steal large sums of money, participate in murder, cause innocent people to crash their cars, and come away without a hitch! I should have better spent my time watching a film that depicts reality and provides a moral lesson. Don’t look for one in “The Italian Job”.
My Ratings: [Average/5]

William Peck, age 45
Comments from young people
Positive—…Everyone loved it! If you like Ocean’s Eleven, this is as good. There is some swearing in it, but no sexual content. The main character is played really well by Mark Wahlberg. Overall, I give this movie a positive review. Very exciting.
My Ratings: [Better than Average/4]

David, age 15
Positive—This movie was awesome. I loved it!! I did think that it got a little slow at parts. It was one of the best crime movies I’ve ever seen. Right up there with Swordfish (the edited version) and Ocean’s Eleven. Go see.
My Ratings: [4]

Jordan, age 12
Positive—…impressed. Good movie’s are hard to find these days, and though my parents had to watch it with me and blip some unacceptable words/comments overall it was pretty good. I love mini coopers and hope to drive one when I get older so of course I liked it just for that. There are a couple comments from “Napster” (a young guy in the movie) that were unacceptable. He claims his life goal is to have the money to buy a radio strong enough to blow the clothes off women and though you never really see anything, in the end he has a huge radio and a woman in his apartment. Other than that there are a few comments or parts in the movie that aren’t good. I would recommend adult supervision and previewing for children under 16 or older.

Some people have a problem with the fact that the whole film is about trying to steal back gold that was stolen from a gang that stole it in the first place. I must confess I don’t, it only created a interesting plot. I believe there are a couple kisses, but nothing huge, (I’m not sure). I would recommend it (with adult supervision) as a good movie.
My Ratings: [Better than Average/5]

Lanie Williams, age 14
Neutral—…very action-packed and enjoyable. The only things negative that I have to say about it is that the F-Word is used along with other foul language and Charlize Theron is shown wearing only a bra and underwear.
My Ratings: [Average/4]