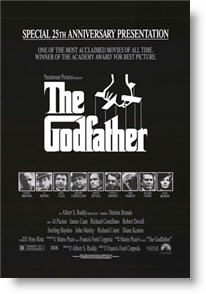 About the Ten Commandments of the Bible

Have you kept each of the Ten Commandments? Are you good enough to go to Heaven? Answer

“An offer you can’t refuse.”

This film attracts a world-wide, almost cult-like following, with its depth, design and artistic boldness that has shined from the moment of its release, right through to present day. I will review the film from a particular angle: The broad-way slide to destruction.

“Let not sin therefore reign in your mortal body, that ye should obey it in the lusts thereof.” —Romans 6:12

“The Godfather” Part I is beautifully directed and methodically scripted. The antithesis of its gentle filming approach weaved in the explosive and gripping content, is the head of the hammer that hit 70’s cinema hard.

The film exclusively follows the lives and events of the Corleone Family—a mid-twentieth century mafia clique in New York. Audiences are magnetically drawn to every aspect of their day-to-day struggles. Formed by Vito Corleone (Marlon Brando), this dysfunctional family has everything the gangster genre asks for. Olive-oiled hair, Italian accents, riches, power, weapons, women, cars, catch-phrases and charisma—we see it all.

From the moment the notoriously chilling “Nino-Rota” soundtrack strikes, audiences are seduced to the screen from start to finish. The narrative takes nearly three hours to unfold, yet with its depth, desires to end are rarely heard.

The adult certificate would be laughed at by today’s standards, but we must remain theologically based, and with a significant handful of verbal profanities, two mild-sexual references, and numerous counts of often graphic murders—take heed. The mafia life always entails temporary highs and pompous riches built off a foundation of lies, deception, violence, lusts and treachery.

With their religious jewelry, rituals and recitals, these men have a “form of godliness, but deny its power thereof” 2 Timothy 3:5.

Playing god-like roles themselves, they freely take lives and break all of God’s commandments with bitterness and hatred. The mafia system has a hierarchy of human importance—with the Godfather sitting at the throne; however, in Romans 3:10 we are told,

“There is none righteous, no, not one”.

Worth noting is the slip into corruption by the lead character Michael Corleone (Al Pacino) and the parallels it connotes to the Christian walk. Michael begins the film vowing to fiancée Kay Adams (Diane Keaton), that he would never join his family lifestyle. He tries to stand alone, but unarmoured, finds himself in frequent compromising situations. Christians are told to fight the battle of Christ equipped with the armour of God (Eph. 6:13), lest we slip away. Michael slowly begins to peer into the gangster world from what he feels is a safe distance, like Lot in Genesis 13:12 who, “pitched his tent towards Sodom.” This is a dangerous approach, and in this film has obvious repercussions.

Christians and seekers, we must be on guard, to avoid the whirlpool of sin and be sure to ruthlessly cut it away. As the Godfather unravels, Michael’s takes some obvious lunges into sin, and his journey becomes deeper and darker, entering a dangerous area of a silenced conscience. Christians,

“Take heed, watch and pray—lest we fall into temptation, the spirit is willing but the flesh is weak”.

“The Godfather” is fictionally entertaining—not a gentle meal to digest, but hosts relevant connotations to any living soul. It remains a definitive and interesting cinematic giant.

Positive
Positive—As with any movie I watch, I view for the sake of entertainment. That’s not to say I take extreme liberties and watch filth. Quite the contrary. Recall Paul’s take in 1 Corinthians 6:12: “All things are lawful unto me, but all things are not expedient: all things are lawful for me, but I will not be brought under the power of any.” These days I do exercise caution; I want to be mindful of what I allow myself to view. After all, as Paul points out later in the same chapter, “…know ye not that your body is the temple of the Holy Ghost which is in you, which ye have of God, and ye are not your own?” It’s important to be aware of what we’re feeding our spirits. Obviously, if we allow sex, violence, etc. to inundate our lives through TV and other various mediums, we’re going to be affected by it.

As a result, I tend to research movies (oftentimes via ChristianSpotlight.com) before watching them, at least nowadays that’s the case. I want to make sure I’m not about to spend two hours of my life wading through a deluge of God’s name being used in vain. Going along these lines, with the movies I do watch, I make sure I watch for the sole purpose of being entertained. I don’t try to extract spiritual meaning or depth from EVERY little nook and cranny. I know some people get so wrapped up trying to uncover religious symbolism in every little pithy detail that in the process they lose sight of the movie. That is, they lose any sense of joy they might have otherwise had while watching the film. They walk away from the movie feeling disappointed. Why? Because their expectations and high demands were inadvertently unanswered.

Okay, having said all that, I want to say “The Godfather” is a G R E A T film. One of the best, undoubtedly. I even own it, which says a lot because I don’t own very many movies.

First of all, there’s the inherent, classic mobster story that’s pitted around this mafiosi family—the Carleone family. The family itself is comprised of varying stellar talent, from Robert Duvall to the man himself Marlon Brando and everyone else in between. The plot unwinds rather slowly, allowing time for the audience to be drawn in and absorb the characters. And while oftentimes macabre, the plot moves fluidly enough just so the audience doesn’t dwell on any one particular thing, be it the man just gunned down or stabbed in the back. I’m not trying to make light of this gruesome aspect of the movie (i.e., the violence). In all honesty, this is definitely not a flick for kids. Even beyond the violent content, the themes are just not suited for a younger crowd. Best leave this one to the adults.

Secondly, this movie shows the familial struggles of… well, a mob family. While fictitious, the portrait Coppola painted is one of a behind-the-scenes look at the strife, turmoil, and challenge the Corleone family suffers, from the dynamics of the aging Godfather (and hence the need for a successor) to the abusive son-in-law to the red-hot, temperamental Sonny. It is this particular aspect, this angle that looks at the FAMILY, that serves as a focal point or a pillar of the tale.

Lastly, aside from these great qualities and oh so much more, there’s the indelible “Love Theme” by Andy Williams. This theme is played several times throughout the movie, manifesting sometimes very subtilely, but always as a pleasant tune. “The Godfather”. Rent it. Buy it. …’Tis truly a classic film.
My Ratings: Offensive / 5

Jacob Keenum, age 19
Neutral
Neutral—Though “The Godfather” does indeed possess great merit, it should be noted that it firmly deserves its R-rating. The violence that is present is graphic, and the artistry gives it a more disturbing feel than most films. There are also a couple of sex scenes, one involving female breast nudity. A masterpiece in every way except for being acceptable to Philippians 4:8 standards. Take caution.
My Ratings: Average / 5

Michael Jean-Baptiste, age 22
Comments from young people
Positive—“The Godfather” is one of my all time favorites. You have an excellent mixture of a great script, Great acting, and a great depiction of total moral downfall. The content that most offended me was God’s name being taken in vain, however it was done by people who you would probably expect it from. See “The Godfather,” if you can handle it, I can’t speak for everyone.
My Ratings: Moral rating: Average / Moviemaking quality: 5