for comic nudity, some crude humor and language 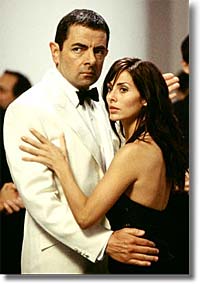 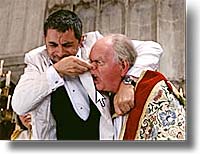 British comedian Rowan Atkinson is probably the funniest man on the planet you’ve never heard of. Wildly popular in Britain, he is lesser well known on this side of the Atlantic. Most that do know of him here know him as Mr. Bean, the title character of his hilarious British TV show and ensuing movie. Atkinson’s Mr. Bean sketches were true comic genius, showcasing his incredible comment for physical comedy and hilarious looks. Though the Bean movie was hampered by a plot, its sketch pieces (largely taken from the TV show) were still incredibly funny.

Now, having left Mr. Bean behind, Atkinson stars in “Johnny English”, the new spy-spoof that, unfortunately, not even Atkinson can save.

Atkinson, as the title character, plays a bumbling assistant in the British secret service. When every other agent is killed in an attack, English is called up to work security detail on the newly restored crown jewels. The jewels, however, are stolen, part of a plot by the devious French entrepreneur Pascal Sauvage (John Malkovich) to assume the throne of England. Though his bosses say Sauvage is clean, Johnny knows better, and sets off with his assistant Bough (Ben Miller) to bring the jewels home, win one for dear old England, and woo the beautiful Lorna Campbell (Natalie Imbruglia).

While the premise of the man who brought us Mr. Bean playing a bumbling secret agent sounds promising, the film doesn’t deliver the goods. Atkinson keeps the movie afloat, delighting with several funny sequences and making the whole thing bearable to watch. The man’s pure genius can’t be denied, especially when he’s making us laugh in the middle of an otherwise terrible movie. Once in a while, shades of Bean shine through, and when they do the results are terrific. It just doesn’t happen often enough.

Primarily to blame, I think, is Neal Purvis and Robert Wade’s screenplay. The two have proven they can write a great spy movie (The World is Not Enough, Die Another Day), but judging by this film they don’t know how to spoof one. Atkinson gets very few chances to showcase his talent, fighting a script that really isn’t funny at all. Most of the gags, with a couple exceptions, come off as incredibly predicable and run into the ground.

Luckily, Atkinson is so good that he makes us laugh anyway. Presented with some better material, he could have made a real gem here. His supporting cast could have used some help as well. Miller adds some life as Bough, complementing Atkinson nicely, but everyone else falls flat. Imbruglia, in her big-screen debut, needs to stick to her recording contract.

Even the usually captivating Malkovich is just plain awful here. Though his inclusion as the villain added to the film’s great promise, he actually contributed to its downfall. Much of it may be the role, but Malkovich fails to inject any life into it at all. His French accent is distractingly bad, intended or not, and he fails to produce any laughs.

No, the film is left up to Atkinson, which is not entirely a bad thing provided he has a decent screenplay to work with. Since that’s not the case, “Johnny English” just doesn’t provide enough laughs to sustain itself over its 87 minute running time.

It has been argued by the producers that kids, boys especially, will love the movie, and that may be true. The film does seem more particularly aimed at kids than the “Mr. Bean” episodes. However, the adult audience that has come to expect so much of Atkinson after Bean will be a little let down here. Yes, he provides a few laughs, but as a whole the movie fails to deliver. So, take the kids if you must, but don’t expect a whole lot.

For a truly wonderful comedic evening, go out and rent some Mr. Bean TV episodes on video or DVD (the movie is fairly funny, but the TV sketches are far better). If you’ve never seen Atkinson do his thing, you’ve sure to be delighted by every devious and bumbling antic. Once you’ve got a taste of the hilarity of Mr. Bean, you’ll realize that this isn’t simply a kids movie that will fail to entertain the grown ups, but a true waste of comic genius.

Note: The film is rated PG for comic nudity (a sequence involving an identifying tattoo on the Archbishop of Canterbury’s backside), some crude humor (particularly one scene of bathroom humor), and language (a few mild profanities, but pretty sparse). This is a Rowan Atkinson film, so don’t expect anything close to a serious issue, Christian or otherwise. The PG is appropriate, considering the rear nudity. Though the movie won’t appeal to very young kids, an audience ranging from kids to adults should view the film with discretion.

Positive
Positive—Folks, this is your basic PG movie, and very funny one… I rate it a “clean” Austin Powers movie. For parents… I don’t recall any bad words except for a**. You do get a full 5 seconds or so of an archbishop’s backside, but it’s included in a final sequence that is so over the top that it fits. Most squemish scene for my kids and I was a question to Johnny English about “making love,” and while the character pretends to be experienced with women, it’s clear he’s not. Furthermore, he doesn’t actually pursue cheap sex. Our family enjoyed the movie tremendously, but we were alreay Rowan Atkinson fans from his “Bean” and “Black Adder” days.
My Ratings: [Average / 3]

GK, age 41
Positive—I can’t remember the last time I went to a movie and laughed this hard, at times my sides were hurting. There is some profanity which easily could have been left out and some sexual inuindo which just went on for to long, not that I approve of it. Lastly, there is a scene where Johnny pulls down the Arch Bishop of Canterbury’s drawers and we are exposed to his naked “butt” which takes up about half the screen. If the above material were taken out you would probably only loose one minute or less. To me this movie should have been rated PG-13 for the material stated above.
My Ratings: [Average / 5]

Pat Prendergast, age 48
Positive—My wife and I saw this movie, despite her skepticism we both laughed through the whole movie, and we plan to buy it when it comes out on video. We appreciated how unoffensive the movie was—even the sewer pipe scene was funny, merely serving to demonstrate Johnny’s incompetence. And the bare bottom’s tatoo wording added lots of humor since it was the last thing you would expect to be on a bishop’s hindquarters. Taken in context, these things added to an enjoyable movie. Atkinson continues to show that you don’t have to be rude to be funny.
My Ratings: [Better than Average / 4]

Jonathan, age 24
Neutral
Neutral—This is an amusing film. Although most of the humor is slapstick they do use some toilet humor… literally. There is a scene where Johnny English climbs a pipe that is used to flush out human waste. Pretty gross. Also there is a fairly long scene where a man’s rear end takes up the whole screen. Even from a morally neutral point of view, the movie was blah.
My Ratings: [Better than Average / 3]

Natalie, age 24
Negative
Negative—From the incredibly terrible opening “theme song” to the ending credits, this movie was really bad. I wanted to leave, but my boys wanted to stay. It had ONE funny spot, and the rest was contrived and about as funny as Saturday Night Live. (Just stupid humor) Don’t go!
My Ratings: [Average / 1]

Donna G, age 42
Negative—Generally funny and harmless gags, a little gross at times. However, the one element I really got squeamish about was the tattoo slogan on the backside of the fake archbishop. “Jesus is Coming—Look Busy” might to the naive be an acceptable comment but it is offensive here and obviously played for very irreverant cheap laughs. Rowan Atkinson is a very funny man but is on record as having no respect for Christianity, and can’t resist the opportunity to trivialise Christ. Satan must get a laugh every time this move runs. It is a pity because the rest of the movie was harmless (if slightly low grade) fun.
My Ratings: [Better than Average / 2]

Philip, age 32
Comments from young people
Positive—I saw this film with my friends and we loved it! The movie is amazingly funny with a twist of slapstick humor thrown in. Although it is a great film, it should be rated PG-13 for rear nudity and language. Other than that, an amazingly funny film. Take any kid over twelve.
My Ratings: [Average / 4]

Michael Trittin, age 13
Movie Critics
…the movie proves once and for all just how great Rowan Atkinson actually is…

James Salter, Cinema Screen
…There’s a disgusting scene in which men are shown relieving themselves and Johnny, trying to enter the building through a sewer pipe, ends up drenched in their feces…

Bob Smithouser, Plugged In, Focus on the Family
…negative acceptability… [due to] use of some crude language and nudity for comedic effect…

Preview Family Movie and TV Review
…All in all… a nice oasis of silliness and fairly clean summer fun, especially for those who avoid AUSTIN POWERS for its crassness and vulgarity…