for action violence and some double entendre 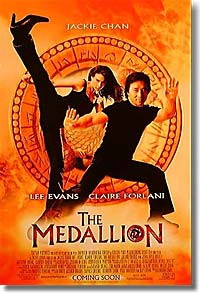 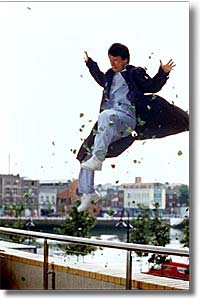 Are you going to spend your immortal life in Heaven? Answer (text and video)

Learn the truth about Buddhism

Is mysticism a valid way to know God? Answer

According to this movie, every thousand years a child is deemed “The Chosen One” who has the ability to unite two pieces of metal, creating a medallion which can give people incredible supernatural powers. Eddie Yang (Chan), Nicole Jones (Forlani), and Arthur Watson (Evans) fight to protect the child from Snakehead (Sands), a man who wants the medallion’s powers for his own villanous gain.

The violence in this film is pretty much what you would expect from a Jackie Chan movie—a mixture of stunts, martial arts, and gunshots—but no blood is involved in any of the fight scenes. In fact, the only bit of red fluid is found in the first few minutes when Snakehead digs a letter opener under the chin of a shady book dealer.

The language was mild with some instances of toilet humor, a reference to body parts, and a misunderstood conversation which conveyed some homosexual overtones. A subtle hint of a past love affair between Eddie Yang and Nicole Jones is presented, implying they might have lived together at one time, though the reference is minor; they kiss at the end.

Another area that might concern some parents is the danger the child is subjected to throughout the movie. Also, Buddhist mysticism is a minor part of this fantasy. Monks worship in a temple surrounded by candles. The character Jai sits Buddha-like with the medallion parts, and in the end he is transported into another dimension through a mystic vortex.

Snakehead makes an interesting comment to Eddie Yang (Jackie Chan): “We are immortal! Why should we care about these worthless humans?” Even we, as Christians, may wonder why should the true divine beings—the Father, Jesus, the Holy Spirit—care about human beings at all? The reason is love. Wonderful, beautiful, unconditional love, the kind of love which only God can give. The kind of love which each of us, by the power of the Holy Spirit, give others every day.

In this film fantasy, immortality is portrayed as a strictly after-death situation. Even though both the good and the bad are made immortal in this movie, they are each rewarded according to the nature of their hearts, just as our place in the afterlife is determined by whether or not we have given our hearts to Christ or if we have not.

Discover the true way to gain an eternal life of joy—GO
Is Hell a real place? Answer

Overall, I recommend this movie. It is cleaner than recent Jackie Chan movies. However, the PG-13 rating should be enforced by parents, even if your child is a huge fan of “Jackie Chan’s Adventures” on Kids WB or the Cartoon Network.

Positive
Positive—I thought “The Medallion” was a very fun, clean movie. First of all, it was produced by Jackie Chan, which made the action/karate scenes very catching and exciting. Secondly, I don’t think I heard any swear words in it, and there were no other objectional scenes either. I found all of the characters very loveable too… very personal. They all did a good job. I would definitely recommend this to all Jackie Chan fans… it’s worth your dollars.
My Ratings: [Good / 4]

Sarah, age 17
Positive—I love Jackie Chan! I wish all action-packed movies begging for my children to watch them were like his. He never gives in to extreme language or sex scenes and the violence is never gory. Most of the humor was innocent, and never more than slightly suggestive.
My Ratings: [Better than Average / 3]

JLG, age 31
Movie Critics
…a no-brainer popcorn movie with lots of amazing action, stunts and very funny scenes… I wish I could say this movie is “kid friendly” because Jackie Chan tends to attract younger fans, but its not. Mild language, a few expletives, colorful phrases and martial arts-style violence make this PG-13 more appropriate for preteens and up, rather than younger children.

Holly McClure, Crosswalk
…may not be a particularly good movie, but it deserves kudos for being a responsible PG-13. Very little foul language. No sex (though some humor employs innuendo). Even the frequent action violence yields few casualties. The filmmakers could have gotten away with a lot more offensive material, yet chose not to. That’s refreshing…

Bob Smithouser, Plugged In!, Focus on the Family
…The film feels choppy, the narrative skips and sputters and, for once, even Chan’s amazing athletic abilities fail to captivate…

Michael Elliott, Movie Parables
…Because the filmmakers often have so little to work with, The Medallion comes across as a mix tape of sparring sounds and various visual styles…

Ed Gonzalez, Slant Magazine
…It’s just too dopey for me to recommend…

Richard Roeper, Ebert and Roeper
…Sadly, “The Medallion” has the feel of an all-too-ordinary straight-to-DVD B-movie…

Andrew Sun, Hollywood Reporter
…Jackie Chan will turn 50 years old …Chan has resorted to the use of two things I thought I’d never see in association with him: CGI and a stunt-man…