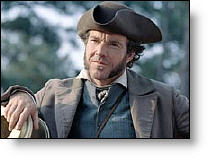 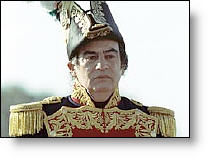 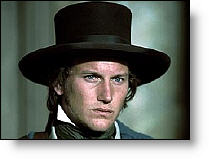 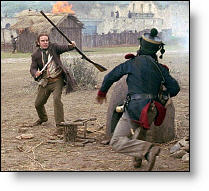 Here’s what the distributor says about their film: “From director John Lee Hancock and Oscar®-winning producers Mark Johnson and Ron Howard comes an epic motion picture event, the dramatic true story of one of the most momentous battles in American history. “The Alamo” is the tale of a handful of men who stood up for their passion and ideals against an overwhelming force. In the spring of 1836, in the face of insurmountable odds, fewer than 200 ordinary men who believed in the future of Texas held the fort for 13 days against thousands of Mexican soldiers led by dictator General Antonio Lopez de Santa Anna (EMILIO ECHEVARRÍA), ruler of Mexico. Commanded by three men—the young, brash Lt. Col. William Travis (Patrick Wilson); the zealous, passionate James Bowie (JASON PATRIC); and the living legend David Crockett (Billy Bob Thornton)—the Texans would sacrifice their lives for their beliefs, but their deeds at the Alamo would make history as General Sam Houston’s (Dennis Quaid) emotional rallying call for Texas independence. The film is written by Leslie Bohem and Oscar®-winner Stephen Gaghan and John Lee Hancock.”

What turns great men into legends? Does an unconquerable spirit of bravery run through their veins? Or is it something more complicated and somehow more extraordinary?

One of the shining highlights of “The Alamo” is its portrayal of men who forced themselves to remain strong in their stand against all odds. Unlike many dramatized historical movies, this film depicts men like Crockett, Bowie, and Travis as human beings who experienced real fear and pain. The portrayal of human emotion only makes these men seem stronger. It is their struggle to remain courageous that exhibits their true honor. Crockett admits that he imagines running away. But he never gives in to this fear. He is the one who plays his violin in a sort of humorous defiance before Santa Anna’s troops. And in a moving scene at the end, he offers Santa Anna the chance to surrender though the Alamo had already been lost.

It is scenes such as Bowie’s last stand, Travis’ receiving his men’s respect, and a Mexican woman’s refusal to leave her sick brother-in-law that give “The Alamo” its heart.

In addition to the strong main characters, there are various minor characters that add to the tragedy of the Alamo’s fall. From the picture of a fallen soldier’s sweetheart to the wide eyes of a hiding little boy, various details add to the story’s strength. As the movie depicts, the Alamo isn’t just a story about a military battle; it is about men and women who died and sacrificed for a cause that they believed in.

I was pleasantly surprised to find that “The Alamo” contains military violence without resorting to gross brutality that is all too commonly found in films these days. The violence was evidently not appropriate for children, but there was not an abundance of bloody close-ups of brutal killing.

Though this is an enjoyable film to watch, it is not without its faults. A few of the speeches were weak, and some pieces of the musical score were lacking. The film would have been stronger and more captivating if both had been more powerful.

There was some swearing, some women dressed in low-cut blouses, and Travis says, “I gamble, go to whores, run off on wives, but at drinking, I draw the line.” (Too bad he didn’t draw the line at those other things too.) The movie shows him signing divorce papers with his wife, but he never goes to a whorehouse. Santa Anna does have a young girl in his bed during one scene, and it is evident that she is there against her will. But he closes the door to the camera, and nothing is ever seen.

(In all fairness, I must also mention that the Mexicans are definitely the bad guys in “The Alamo.” The movie is biased in favor of the Texans.)

“The Alamo” is definitely an entertaining—and educational film—for teens and adults. Viewers will enjoy learning about legends such as Bowie and Crockett on a more personal level. And though the Alamo ended in pure tragedy, the movie doesn’t end in defeat.

Positive
Positive—This is an excellent film with some objectionable content, but nothing serious. Some cuss words and one scene suggesting sex but nothing bad. It’s a great historical film about the fight over the Alamo and the state of Texas. The characters in the film often pray or refer to God in a positive manner.
My Ratings: [Average/5]

Shannon Hammell, age 22
Positive—This is a good movie that is a reasonably accurate account of this historical event. The characters are not portrayed as the stereotypical heroes in white hats, but instead as fallible humans, each with their own shortcomings. I was satisfied with these portrayals (which my own personal research confirmed were very close to reality), because they gave a realistic depiction of man’s fallen nature.

In the end the positive virtues and heroic element of their character came shining through. I saw no derogatory caricatures of Christians as we so often get from Hollywood, and the level of violence was for the most part acceptable and matches the PG-13 rating.
My Ratings: [Better than Average/3½]

Fred Williams, age 42
Positive—Despite the bad press hype, The Alamo is really a film worth watching. The acting ranges from fair to pretty good, and the scenery is fine, but it’s the true story of heroism behind the movie that really adds punch to The Alamo. Davy Crocket is by far the best character of the bunch, although Santa Anna and Bowie hold their own.

The bravery of these men is well-portrayed; watching the movie inspired me to stand up for my own beliefs despite overwhelming odds. I didn’t notice any pervasive language, and their were no sex scenes. Yes, it’s violent, but nothing stomach-churning. Little kids might be frightened, but if your school-age kid can handle Jurassic Park or Indiana Jones, they should be fine with The Alamo.
My Ratings: [Good/4]

Dana B.
Neutral
Neutral—For all the promotion this film got I must say I was a little disappointed. We all know what happens at the end and most of the plot is taken up getting us there. Obviously the producers spent quite a bit on the set. There’s little action until the end and no suspense so I think this one almost belongs in the wait for the DVD pile.
My Ratings: [Good/3½]

Bob C., age 40
Negative
Negative—I went to The Alamo expecting to view a great epic. What I saw was extremely disappointing. Disney’s influence on this film took out anything remotely violent, so all the exciting action simply wasn’t there (I’m not a stickler for 100% realism in all films, but this was just ridiculous for anything but a children’s film). The only cool-looking action I remember was towards the end, and fades away because, apparently, even striking with blunt objects is too graphic for a PG-13 film. The Alamo had a very flakey and poor pace throughout, and when you combine this with the extremely lackluster battle sequences, you don’t come away with much. There was very little swearing, however, and the acting was good, but an absence of much profanity and good acting doesn’t make up for the poor direction and action scenes.
My Ratings: [Good/2½]

Nathan Gundlach, age 19
Comments from young people
Neutral—historically this movie is accurate and very educational also very entertaining I would give this move an A plus if it weren’t for the cursing and some gore other than that I would recommend this movie for anyone over the age of 14
My Ratings: [Better than Average/4]

Matt T, age 16
Positive—The only thing objectionable about this movie, is some mild yet graphic violence. Most people it would definitely not bother at all. It has a great ending with the victory of the Texan militia BUT, watching the slaughter of the poor souls at the Alamo was hard. They put up a great fight. This movie has comic relief though so it isn’t exactly what I would call a depressing movie. Anyway, I wish EVERYONE could see this movie.
My Ratings: [Better than Average/5]

Jacob Boyd, age 15
Positive—The Alamo is a movie that I would want to see again, and probably buy on DVD. Me and my dad went and saw the movie, when it first came out in the theaters, and we really enjoyed ourselves. In fact, he’s still talking about it. The only thing that I didn’t like about the movie was the music (soundtrack). If they would of had a better music selection, the movie would have been outstanding. The acting was great!! The person who played Davy Crocket (I can’t remember his actual name at the moment) was the best actor in the movie and the best Davy Crocket I’ve ever seen.
My Ratings: [Excellent!/4]

Chris G., age 15
Negative—I saw this movie with my class to learn more about the history of The Alamo. I learned a lot but I really wouldn’t pick this movie if you are looking for something entertaining. The acting was terrible, I had to hold back from laughing a couple times. The movie was just kind of boring. There was some violence but the most sickening thing in the movie just showed the shadow of the action on the wall, but you still got the picture in your mind. The only reason I liked the film is because I got out of school to watch it and I totally respect what the Texans did, but I wish they would have made a better movie that was more realistic.
My Ratings: [Better than Average/1]

Lou Lumenick, New York Post
…The battle, when it finally comes, is brief, admirably non-gory and rather dull…

Chuck Wilson, LA Weekly
…Even with Thornton, this is a lost cause… all very tasteful and grand… [but] a crushing bore