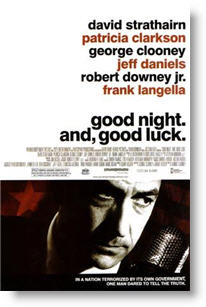 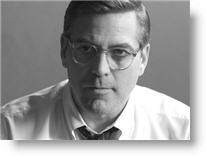 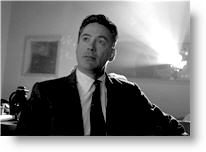 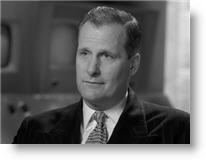 You may not be one who sees everything in black and white, but in “Good Night, and Good Luck” you have no choice. In his second feature film directorial effort, George Clooney manages to avoid a lot of gray area surrounding the blacklisting and Communist accusations made by Senator Joseph McCarthy during the early 1950s, but he does manage to advocate the pure white motives of the broadcast journalist Edward R. Murrow and his team of CBS reporters. The subject matter is interesting and the message quite pointed, but overall the film was not entirely captivating.

Beginning and ending in 1958 with Edward R. Murrow (David Strathairn) making a speech in which he (rightly) criticizes the misuse and abuse of television in American society, the film spends the rest of the time in the early 1950s with Murrow targeting McCarthy’s “red scare” tactics. Working with his team of CBS reporters, including Fred Friendly (George Clooney), Murrow targets one specific case involving a man in Detroit who was dismissed from the U.S. Air Force due to suspicions of Communist relations. Their investigation and fight to defend this man (and others like him that they feel are being wrongfully treated) eventually affect this particular case, and also bring them into a public confrontation with Joseph McCarthy himself.

Keeping in the spirit of productions of the 1950s, this film refrains from including most objectionable material. There is one instance of God’s name being taken in vain, but no other foul language was detected. Even one dramatic event involving a person’s death is presented fairly subtly. We can infer what is happening, but no disturbing images are shown with it.

The entire film is in black and white, and this may be for the same reason of trying to capture a 1950’s feel. There may be other reasons, too, but artistically it didn’t grab me as much as “Schindler’s List” or even “The Man Who Wasn’t There.” Functionally, it works well, however, especially since the segments where McCarthy is shown (as well as various television ads) are in the original black and white footage.

Some of the comments and ideas presented throughout this film seem to resonate with some current political topics. If it is intentional, it seems that this film then is using this time in history to criticize things happening today, and some of the lines that are injected reflect this. For instance, at one point Murrow says, “You cannot defend freedom abroad by deserting it at home,” and also states that “Dissension is not disloyalty,” which are some sentiments shared with those who are not supporters of President George W. Bush.

Just creating a film to be current political commentary may explain some of the reason the film wasn’t more evocative. Murrow seems like an engaging enough character, but they didn’t explore his character nearly as much as they could have. The surrounding characters as well seemed to lack depth. Maybe this was because those making the film were too aware of the political commentary they were making. There was a lot of potential for this film, but it seemed to be sold a bit short.

Still, the ending sentiments given in Murrow’s speech that television could and should instruct, teach, inspire and more is something that should be well applauded. This film tries to do something in this same vein.

Positive—…George Clooney brilliantly brings to life the legend of Edward R. Murrow. This David versus Goliath film is both informative and inspirational. The film is captured in black and white and it works well on so many levels. First it visually takes you back to another world, another era. It takes you back to a time where the perception of everything was black and white. There was no Watergate scandal, no Vietnam War, the pessimistic attitude that currently erodes society was not yet ignited. It was a time when few questioned authority and the U.S. Government was held in a higher regard…

The film was cleverly supported by a strong cast, including Robert Downey Jr. in a very small but playful role. The pace of the film was almost perfect; it was never too fast and never too slow. Overall, it was a sad film, a reminder of what paranoia can bring, of what kind of atmosphere it can create.

In this film we see David Strathairn give an Academy Award caliber performance as Edward R. Murrow. Murrow was one of the few men of his time willing to stand up against Senator Joseph McCarthy during the 1950s Communist witch hunt. The film is clearly more against the tactics of McCarthy than against the man himself. It reminds us to be thankful for Constitutional right for a free press… This film is fine for teenagers, although young children may not entirely understand the context…

Obviously George Clooney is not one to shy away from politics. He is known to be a very opinionated actor/director, and one who is not supportive of the current administration. I know many people who will miss out on this great film to, in their minds, abstain from supporting this man and his politics and that is just wrong. …I would encourage everyone to see this film. It has great entertainment value and historical significance regardless of the political ideology of its producers… Violence: None / Profanity: Mild / Sex/Nudity: None
My Ratings: Good / 4½

It supports speaking out courageously against injustice committed by the powerful—something all of the biblical prophets did.

My wife and I took our 13-year-old twins to this movie, and we found it refreshing to be able to take them to an intelligent, grown-up movie that was not ruined by sexual immorality or gratuitous violence. The movie provoked an interesting family discussion about the biblical principles at stake in the movie. Earlier reviewers on this site have suggested that the principles presented in the movie “resonate with some current political topics,” and that some Christians may stay away as a result. If there is any such response, then it should not make Christians hesitate to see the movie, but rather should make us think. My Ratings: Good / 4

Although McCarthy is presented in a negative light, most of this negativity emanates from the actual news footage itself, not from the obvious opposition to the McCarthy era by the CBS newscasters. I recommend this movie to all thinking Christians. I now want to do some research on Joe McCarthy. A good movie will make you want to know more about a subject.
My Ratings: Better than Average / 4½

Halyna Barannik, age 59
Positive—How refreshing to view a movie that was clean and yet very adult and intelligent. It presents a strong indictment against today’s journalistic standards of celebrity/tabloid news. It reminds us that the pen can still be mighter than the sword and that it behooves us all to stand up to injustice and the bullies of this world. Whether they be liberal or conservative.

I would highly recommend this film to any journalism or film student. This film is beautifully shot and the quotes from Edward R. Murrow verge on being poetic.
My Ratings: Good / 4½

Vivian Shafer, age 46
Positive—This was an excellent work by George Clooney. I think that the movie clearly discusses honesty, integrity, and the “politics” behind the media, as well as posing questions regarding these areas. The movie was tight and well-paced. The only thing that I have to say against the film is that I didn’t think the jazz music score was suitable for the mood of such a piece. The score tended to be relaxing, and when one is attempting to reveal Senator Joseph McCarthy as a fraud, it certainly is not a relaxing feat one is attempting to perform.

Definitely worth watching. There is no sex or nudity or violence, and not much foul language. Of course, this is probably not a movie for children, as they will most likely get bored and will not understand the implications and history regarding McCarthyism in the United States.
My Ratings: Good / 4

Cornelius Christian, age 18
Negative
Negative—“Good Night and Good Luck” has a political agenda. It plays as if it were one of those black and white negative ads we see over and over during election time. And it leaves behind the same bad taste. Edward R. Murrow was as much showman as he was journalist. The film acknowledges this; if it didn’t the film would be a complete bore. Joseph McCarthy was never the demon that Clooney and company, and all of today’s media, make him out to be.

The Clooney crowd never explain why Joseph Kennedy, Sr., supported McCarthy campaigns and his Senate hearings. They don’t tell us that Robert Kennedy was a good friend of McCarthy’s. In fact, the man chosen to be the godfather of Bobby Kennedy’s eldest child, Kathleen Kennedy Townsend, was Joseph McCarthy. Bobby Kennedy even tried to work on McCarthy’s staff. The media portrait of Joseph McCarthy, a flawed figure as are many men who served and still serve in Congress, denies a number of facts and truths.

The Venona files proved that Communists indeed worked in the U.S. government. Those witchhunts did turn up more than a few witches.
My Ratings: Average / 2½

E! Online
…one of the best ever about the news media…

New York Daily News, Jack Mathews
…The film is ambitious in intent, not in scope…