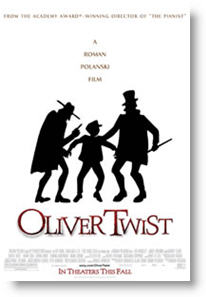 Plot: One of the literature’s most famous orphans, Oliver (Barney Clark) flees a workhouse to London where he falls into a gang of pickpockets led by the Artful Dodger (Harry Eden) and looked over by Fagin (Ben Kingsley).

Having watched David Lean’s 1948 version in the last year, I confess my first thought upon seeing a trailer for Roman Polanski’s 2005 entry was, “Does the world really need another adaptation of Oliver Twist?”

After screening Polanski’s version, my answer was “probably not.”

The film is competently acted and perfunctorily faithful to the plot (if not the spirit) of Dickens’s novel. Why, then, does watching it seem like such a chore?

The art design is reminiscent of Douglas McGrath’s 2002 depiction of Nicholas Nickleby, but while the bright colors and costumes worked in that film, they seem out of place in “Oliver Twist”, a story about people who have already fallen into the financial and spiritual abysses upon which the Nickleby’s are teetering. The black and white cinematography of Lean’s version captures more readily just how dark Dickens can be.

It is odd that of all Dickens’s novels, Oliver Twist should have the most celebrated and varied theatrical life. Perhaps the story of an orphan eventually escaping poverty resonates with modern beliefs in upward mobility. Narratively, however, Oliver Twist presents several problems.

The central character is more reactant than agent; his changes in fortune are wrought more by what others do to him than by what he does for himself. It’s not an accident that the juiciest roles in Dickens’s story are those of the ancillary characters who are all more complex and interesting than the protagonist: Fagin, Sykes, even the Artful Dodger. Of course, Oliver is a child, so some may argue that his passivity is perfectly credible, and that’s the point. Dickens was an inescapably political writer, never far from using his story as social commentary. “Twist”, even more than most Dickens, is foremost a vehicle to draw attention to the corrupt and flawed social institutions (orphanages, courts, even the church) that fail to address the basic human needs of its least prosperous members.

Some Christian viewers who are adverse to representations of violence and sexuality may appreciate and even trumpet the film’s PG-13 treatment of admittedly dark and violent material. For me, however, the film borders on prettifying material that Dickens intentded to be difficult and disturbing to look at. The camera cuts away from a key murder, showing only a pool of blood under a door. The prostitutes, while not as glossy as Heather Graham in “From Hell” lack any obvious physical signs of the poverty and abuse under which they labor.

The most compelling part of the film is actually the end credits, where the stylized sets give way to bleak, historical drawings of the prisons and gallows so instrumental in the plot. These pictures teem with the raw power and emotion that the film itself lacks. It is undoubtedly a hard sell to convince Christian viewers that a film ought to be more explicit, but here the film’s modest tone is antithetical to its subject matter. Oliver Twist may be the most romanticized of Dickens’s depictions of harsh, Victorian social realities, but Dickens was hardly one to encourage readers to hide or turn away when confronted with unpleasant or distateful realities.

It is difficult to watch any Polanski film without reading it through the lens of his own brushes with the American judicial system. That fact, in conjunction with the film’s streamlining of the novel’s plot, make the final meeting in prison between Fagin and Oliver an awkward misfire. In the novel, Oliver’s reason for visiting Fagin is to try to get him to divulge the location of papers proving his parentage. With the absence of that subplot in the film, Oliver’s only stated reason for wanting to visit Fagin is to pray for his soul because he “was kind to me.” Dickens does have Oliver cry out to God to have mercy on this “wretched man,” but only after Fagin reveals the location of the papers that secure Oliver’s future. In Polanski’s version, Oliver comes off as a little too angelic, possessing a Christian sensibility that the audience has not seen from him anywhere else in the film.

“Oliver Twist” may be a hit with high school students who find Dickens’s prose too lengthy and sentimental and Lean’s version too dark and inaccessible. Kingsley is terrific, but when is he not? The adolescent actors avoid mugging for the camera, and Leanne Rowe’s Nancy is a poignant depiction of a woman whose youthful innocence has been destroyed but not forgotten. Still, despite the growling of Sykes and the incessant barking of his “vicious” dog, the film lacks the menacing tone of the best of its predecessors. Perhaps it is because we’ve seen the story before and know the ending, but we never quite feel as though Oliver, be he starving, thieving, or kidnapped, is ever in any real danger of not ending up fine in the end.

Neutral—Spiritually, young Oliver Twist is an inspiring character. He holds true to a belief in God throughout the entire film, no matter his situation. He always believes the best will come of everything, and he possesses a sincere sorrow at the choices made by some of his companions.

I have seen many a young actor in my life. Some good, some poor, but none quite as believable as Barney Clark. The child is a marvel onscreen, really bringing the depth of Oliver’s character to life. He and his counterpart, John Howard Davies, from the 1948 version, possess an equal amount of talent, and I was very impressed with his performance.

Ben Kingsley as well, did a superb job. He was humorous, but also possessed a vicious quality that only comes from living on the street your entire life. But in spite of his remarkable performance, I almost found it to be mimicking that of Alec Guinness in the 1948 version. There were too many similarities, even down to the appearance. I only wish that Leanne and Harry had been given more of a chance to shine. Much like I wish Nicholas Rowe’s character had been integrated more into the telling of Nicholas Nickleby.

What disappointed me most was the performance of Jamie Foreman as Sikes. He could terrify, true, but in the end, I wasn’t impressed with the character. There was no depth to the performance, no real spark that spoke of a man enjoying the role and putting his all into performing it well. I would take Robert Newton’s performance any day of the week.

What it comes down to is a fantastic storyline with some weaknesses. The climax was not as impressive as it could have been. Roman Polanski gave us marvelous cinematography, and a rather engaging musical score, but some scenarios needed to be followed through. I found sections missing from previous versions which would have added a great deal to the film itself. There was much I loved about it, and some that didn’t impress me either way. It probably boils down to what you prefer in a movie.

I enjoyed it. I will see it again and gladly. It is a spiritually uplifting film and gives a vast impression of one boy’s determination to follow what he knows to be right. Oliver never hates, never despises those who hold him in contempt. He is remarkable and I would enjoy the movie if only for his character.
My Ratings: Average / 4

Carissa Horton, age 21
Positive—…Life was cruel during the Victorian Era and still just as cruel today in China, Indonesia. There are still work houses in China, Korea, South America, Mexico, etc. with 10 year old kids making our tennis shoes and shirts—suffering just as bad, just as real right now. After seeing this film I look forward to the Millennial Reign of Christ where incidents like the ones viewed in Oliver Twist being experienced long ago will not be tolerated.

…Cinamatography was excellent. Actors did their parts well. I would recommend it to get people out their shells to see what life is really like and help people in desperate situations. As of this writing not many people in America know what its like to be so deperately destitute and poor and hopeless.
My Ratings: Average / 5

Bill Easterling, USA, age 39
Comments from young people
Positive—I thought this movie was very good. It was long, but so is the book. The acting was good (esp. Harry Eden and Ben Kingsley) and I enjoyed it very much. It was violent in some parts, and a few girls wear dresses with low necklines. I would recommend only 13 and up to see it. Little ones might be frightened in the violent scenes and tweens might think it too boring. But for my age and up I’d say “See it!” It is a story of redemption. Dark but good nonetheless.
My Ratings: Better than Average / 3½

Isabella Rivera, age 14
Negative—The movie is the most boring movie I’ve ever seen…
My Ratings: Average / 3½