The Assassination of Jesse James by the Coward Robert Ford

for some strong violence and brief sexual references 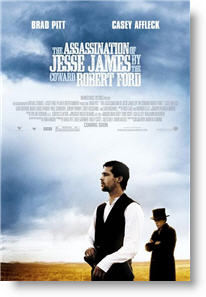 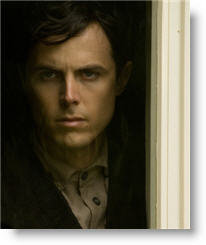 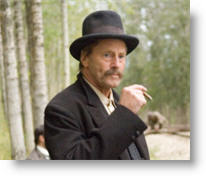 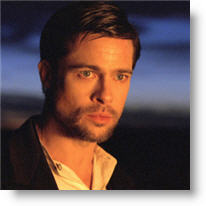 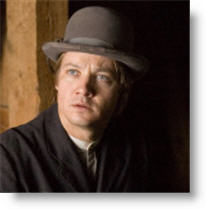 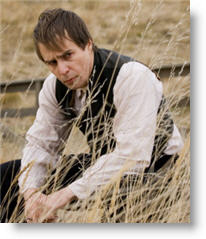 In September 1881, nineteen-year-old Robert Ford (Casey Affleck) comes face-to-face with the idol of his youth: Jesse James (Brad Pitt). Jesse and his older brother Frank (Sam Shepard) have been robbing banks and trains for fifteen years. Their escapades have been recounted in many florid paperbacks, which Robert Ford has grown up reading. Now the world-renowned outlaw is preparing to rob a train in Glendale, Missouri, and Robert and his older brother Charley (Sam Rockwell) get to join the robbers. All that Robert has read and daydreamed about is about to come true for him. He can ride with Jesse James—be just like Jesse James.

In April 1882, Robert Ford shoots and kills Jesse James. This is not giving away the climax of this film. Its title does that (for those who do not already know this historical fact, so often repeated in films, books, ballads, and articles). This film tells how one teenager’s emulation of a living legend turns to betrayal; how the lust for fame leads to an act of brazen cowardice; and how people create the shadows that haunt them.

The protagonists of this film are thieves and murderers. Therefore, the film’s content is almost necessarily offensive. There are scenes of explicit violence, although they are not gratuitous but depicted with nearly documentary naturalism. (Still, they are rightly disturbing.)

There are also gratuitous scenes containing dialogue of an overtly sexual nature, and some bodily exposure.

On the surface, the film presents a parable of “those who live by the sword die by the sword.” But it also presents a cautionary tale of misguided adoration, as Robert Ford’s fan-boy obsession with Jesse is revealed to be foolish and unfounded. This is a fitting commentary on the rabid fan obsessions of many in our culture today, who zealously follow the exploits of movie, sports, or pop music stars. Or even on the pursuits of those who seek that stardom for themselves, on shows such as “American Idol”. As with the ill-fated Robert Ford, all such idolatry and pursuit of celebrity are misguided and unfounded. There is but one man worthy of adoration and emulation in all of history: Jesus Christ, the God-man. In him alone is peace, joy, and rest. He alone is the way, the truth, and the life. (See Isaiah 9:6-7; Matthew 11:28; John 14:6; 1 Peter 1:3-9, etc.)

The content of this film restricts it to adults, but teenagers would likely be bored with it anyway, because the film is a character study, not a shoot-‘em-up. As such, the film is very well made. It is far better than if it tried to be an action film or to surprise the viewer with its well-known events. Based on the novel by Ron Hansen, the film creates a great deal of tension, not from unexpected plot twists, but from how people’s perceptions of each other create distrust, fear, and anxiety.

The performances are uniformly excellent (Casey Affleck is nominated for an Academy Award), as is Roger Deakins’ gorgeous cinematography (also nominated). Unusually, for a fiction film today, the film is narrated (by Hugh Ross), but this adds to the verisimilitude of the proceedings, and lends the film even greater historical credibility. Some of the facts of the events are so curious as they are, that no embellishment could improve on them.

Positive
Positive—This is a serious piece of work, a western that emerges as a character study of an outlaw in his last days. Jesse James was once the most wanted man in America. However, after he was shot by Robert Ford, he became a legendary hero in the Robin Hood mould in the minds of people with Ford being vilified as a coward. The movie here presents James in his true light, as a thief and psychopathic murderer who masqueraded as a respectable citizen between robberies. Ford idolized James, or the James legend, but is gradually drawn in by personal desire for glory, to be the man who shoots James in the back.

The performances are outstanding, as is the photography. If I have one serious reservation, it is that the film is too long and could have done with less dialogue, especially at the beginning. But as a warning as to who we make our heroes, it is outstanding.
My Ratings: Average / 4

Ken Edwards, age 60, United Kingdom
Positive—Director Andrew Dominik, whose first film was the bloody semi-biopic Australian prison film Chopper (2001), tries—and mostly succeeds—in his second feature. The movie is overlong to be sure, but it has style and grace. I can honestly say, however, that until the final six minutes, the film seemed rather flat. Due to the long running time and the absence of both action and momentum in the film, I was largely unmoved before the movie’s subtle, yet painfully captivating finale. Excellent acting, especially by Casey Affleck. If you come to the film questioning whether Affleck’s performance is all that it is cracked up to be, as I did, you won’t by the time the credits roll. His shy, nervous, finnicky Robert Ford sticks in the mind and makes you feel like you’ve known his type yourself. One note: remember that the film is a work of fiction based on Ron Hansen’s dramatization—not historical fact.
My Ratings: Moral rating: Average / Moviemaking quality: 4

Comments from young people
Positive—An absolutely beautiful experience. Brad Pitt’s performance as Jesse James is incredibly subtle, but at the same time very cold. Casey Affleck’s performance of Robert Ford is very quiet at first, but the transition in his behavior after being propositioned by the government is incredible. When the moment finally happens, it is incredibly graphic and you almost wish that Jesse hadn’t have been
My Ratings: Moral rating: Average / Moviemaking quality: 5

Gary Cogill, WFAA-TV
…adds another gauzy chapter to the overtaxed James myth, if not much rhyme or reason, heart or soul. …

Manohla Dargis, The New York Times
…its excruciatingly deliberate pace makes you wonder if Andrew Dominik’s film, as spare as it is self-important, intentionally unfolds in narrative slow-mo. …

Carrie Rickey, Philadelphia Inquirer
…a serpentine, snow-smudged and wood-smoke-thick stroll in the shoes of a dead man walking…