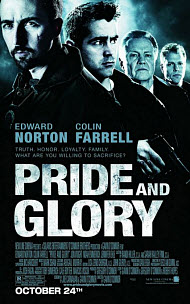 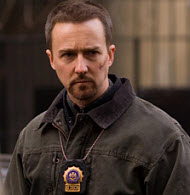 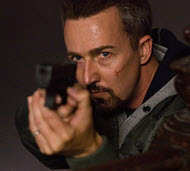 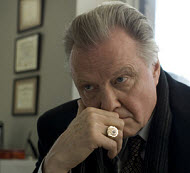 “Truth. Honor. Loyalty. Family. What are you willing to sacrifice?”

“Pride and Glory” follows many of the clichés belonging to the “good cop vs. bad cop” film genre. However, this film does succeed in providing more during its long run. Glimpses into the cops’ personal lives help create well-rounded, believable characters. The top performances by the cast also classify the film as above average.

A botched drug raid leaves four cops dead; all four were under the command of Franny Tierney (Noah Emmerich). Franny feels personally responsible for his men’s death. Along with this stress, he also has a dying wife, Abby (a convincing Jennifer Ehle).

After learning of their deaths, Franny’s father Francis Sr. (Jon Voight) convinces his estranged son, Ray, to help his brother. Ray Tierney (an excellent Edward Norton) bears a scar on his cheek from a mysterious past. He recluctantly agrees to join the task force and help investigate the police murders. After some investigating, Ray soon finds a path of police corruption that leads to his brother-in-law Jimmy Egan (Colin Farrell).

This movie does use some the worn-out cop-movie clichés. First of all, it does have the divided family with the good, bad, and the morally in-between cop. It also shows the dilemma between loyalty to the force and to the truth. However, what keeps this movie from being a fully recycled story are the extraordinary performances and the home lives shown.

While Jimmy is corrupt, he is an intensely loyal family man who loves his wife and children. Franny’s wife is dying of cancer, and the two share deeply moving scenes. While Ray is labeled as the good cop, he is shown to have his own flaws. He once gave in and lied to the grand jury about a previous case. This haunts him, with a broken marriage and a jagged scar on his cheek. When he begins to find out the truth, he quietly questions his family and is torn between the truth and loyalty. He tries to solve this by silence. The actors do not overly perform their parts, instead bring subtle convincement to their characters.

While “Pride and Glory” has many praises, the film is extremely offensive. It has the most cursing of any movie I have ever reviewed. I gave up counting, because it was almost impossible to keep up with the number of profane words. In all, I counted over 115 f-words and about another 22 profanities. In this case, it does fall into the film stereotype of filthy-mouth cops.

The only sexual content had to do with one of the gangster’s girlfriends. In one scene, he rips off her underwear (no privates are shown), and she kisses his neck while he shoots someone. After a murder, she is shown running hysterically down some stairs. Her breasts are briefly shown in this scene due to her skimpy clothing.

The violence in the film is dark, disturbing and constant throughout. In order to get some information, Jimmy threatens to burn a baby with a steaming iron. This was after he beat the father and punched the mother. For the sake of space, it would not be plausible for me to list all of the violence. “Pride and Glory” contains plenty of torturous beatings, shootings, dead bodies, and blood. One character commits suicide by shooting himself in the head. While he does cover up his face with a towel, the viewer sees his splattered blood on the back windshield.

For several years, Jimmy went along with his corruption. He stole money, physically beat or killed people into silence. He happily gave into his sinful nature, since he apparently had it under control. Throughout the film, he became nervous as his bad actions were beginning to catch up with him. Paul addressed what would happen when one leads a destructive life. In Galatians 6:7-8, it reads:

“A man reaps what he sows. The one who sows to please his sinful nature will reap destruction.”

When Franny began to reap the results of all the destruction, he was caught in a moral dilemma. He had spun himself into the middle of an impending disaster by always ignoring Jimmy’s exploitations. Now that Jimmy was getting out of control, Franny admitted to his wife that he was scared and didn’t know what to do. She simply and wisely asked him, “Do you know how to make it right?”

When digging ourselves so deep into sin, it’s easy to feel hopelessly lost, with no way out. For the way out might be the hardest, since it would require the exposure of our wrongdoings. This would especially be difficult when that exposure would potentially hurt our families and friends. One of the best examples of this is the story of Paul. While killing hundreds and hundreds of Christians, Paul (who was Saul at the time) personally attacked the body of Christ. On the road to Damascus, Jesus asked him, “Why are you persecuting Me?”

After Jesus revealed himself to Paul, he became a Christian. Paul’s life was never perfect afterwards. He was at times still reminded of his murderous past. We have all done things that might haunt us from time to time. It is at those times that we must not forget the goal, the purpose to our being here in this short life. We must move forward. Paul wrote:

“But one thing I do: Forgetting what is behind and straining toward what is ahead, I press on toward the goal to win the prize for which God has called me heavenward in Christ Jesus.”

Although I was offended by all the violence and profanities, I felt more depressed than offended when leaving the theater. The movie felt so hopeless. When things were coming to an end, Jimmy said, “I am going to burn for this.” He accepted this horrible resolution, since he did not believe in God. While we are still alive, it is never too late to accept Jesus. He is the one that said:

Negative—I literally coulnd't watch more than 5 minutes of this movie. I can take a bit of swearing, but it was relentless, enough for me to stop it. Avoid this if you care about the state of your relationship with Jesus, because it will hinder it.

Whatever is pure, whatever is Holy… think about these things.
My Ratings: Moral rating: Extremely Offensive / Moviemaking quality: 4