for sequences of strong bloody horror violence and gore, graphic nudity, sexual content, language and some drug use. 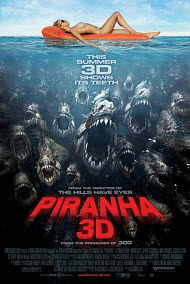 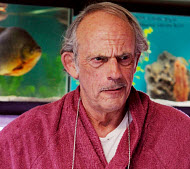 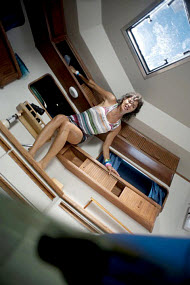 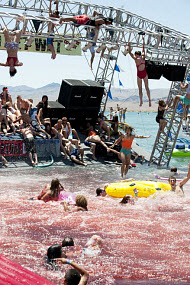 Fish in the Bible

“What do they really eat?”

Ahhh, everyone loves the comeback, right? We cheer when an athlete or movie star returns to the limelight after an injury or long absence! Ticket sales often go through the roof when the hero returns. [Remember when Muhammad Ali came back after a series of losses, or when an elder George Foreman graced the ring and beat the tar out of his younger opponent, even when Brett Favre un-retired… the first time?] Perhaps the studio execs wanted to capitalize on America’s fascination with the comeback when they green lighted the remake of “Piranha” (1978). Alas, “Piranha 3D” (2010) does not have the chops [pun intended] to find the former glory of its predecessor.

The original film was released on the heels of the uber-successful “Jaws” and was pushed along at the box office by smart taglines such as “Just when you thought it was safe to return to the water.” Unfortunately, for this contemporary version, the viewing public seems to be tiring of the lack of creativity in Hollywood and its fascination with the remake, as well as the endless [unnecessary] supply of 3D movies popping up all around.

Directed by Alexandre Aja (“Mirrors” (2008) and “The Hills Have Eyes” (2006), “Piranha 3D” stars Elizabeth Shue as Julie Forester, a single mom with three children who is also the sheriff of Lake Victoria, a popular tourist attraction. It just so happens to be Spring Break and the lake town is overrun by college coeds thirsty for the next alcohol-fueled party. The presence of so many eager students brings to town one Derrick Jones, host and director of “Wild, Wild, Wild!” (a reality DVD series similar to “Girls Gone Wild”). Jerry O’Connell (“Stand by Me,” “Kangaroo Jack”) mimics GGW creator, Joe Francis, in this role. The rowdy students cause enough problems for the limited staff in the sheriff’s department, but when an earthquakes unleashes thousands of hungry prehistoric fish on the unsuspecting revelers, there is definitely more than the law can handle.

Let’s just be frank here. “Piranha 3D” is not a family-friendly film, nor is it Christian-friendly by any stretch of the imagination. Excessive female frontal nudity, bad language, and gore galore are par for the course in this shlockfest. There is a brief moment where two Christian evangelists are trying unsuccessfully to witness to the party goers; their placards declaring “Read the Bible” and their cries to denounce the devil were easily drowned out by the deejay’s blaring music. The film seems to cheer on alcohol abuse and illicit sexuality. Even Sheriff Forester seems unfazed when she finds her teenage son viewing Internet pornography; in fact, Jake (Steven R. McQueen) chastises his mother for walking into his room and twice interrupting his activities. Julie seems to accept her son’s rebuke.

Unlike the original, this film lacks subtlety; nothing is left to the imagination. When his body had been virtually consumed from the waist down by the fish, Jones laments that his genitalia had been eaten off; moments later, we see his member floating in the water being consumed by one of the piranha.

In the original, the man-eaters were the result of a genetic experiment gone awry; the military had plans to use them as part of the Vietnam War strategy. In this iteration, an earthquake unlocks a prehistoric lake where the voracious critters have been cannibalizing each other for “millions of years.”

Films released in the 1970s continued the decades-old tradition of the B-movie; sadly, the 2010 throwback has far too much B for the Christian viewer: booze, bikinis, breasts, bare bottoms, and blood! The 3D technology is better than most recent attempts, but good cinematography alone cannot redeem this mess-of-a-film!

Comments below:
Positive
Positive—This film blew me away. The acting was spot on, and the 3D effects were spectacular. The piranhas looked fake, so this film wasn’t scary at all. In fact, I laughed more during this movie than I did in most comedies. It is very campy, which only adds to its appeal. I would pay to see this in theaters again!
My Ratings: Moral rating: Better than Average / Moviemaking quality: 5

Scott, age 24 (USA)
Positive—I loved this movie. It brought me back to the 80s when the horror movies were just like this… you didn’t take it serious. Of course, I wouldn’t take the kids to see this; there were some freaky parts and plenty of nudity that would offend most Christians. That was your heads up.

I know there will be other Christians who will see this film, and shockingly get upset and offended at what they see on the screen. So like I said… heads up people… this is not for the sensitive Christians out there. It has tons of blood, nudity, language, and man-eating piranha.

One thing that did shock me was a family of 8 in front of me with three little kids. This is no way a kids movie.

Anyways… I loved “Piranha 3D” and would go see it again. It’s a fun, action, horror movie. The acting was pretty decent, and the tons of cameos were great, too. I recommend to any horror fans who enjoyed 80s horror. I don’t recommend it to anyone who gets offended at language or the sight of skin.
My Ratings: Moral rating: Extremely Offensive / Moviemaking quality: 4

Negative
Negative—This movie is in NO way appropriate for Christians of ANY age. I walked in assuming the “R” rating was for all the gore and some language. The movie should have been named boobs and piranhas. This is not just a mere flashing. This movie is literally saturated with nudity.

I cannot express enough to you who are on the fence about seeing this movie how much you will regret seeing this. I am so ashamed of having sat through it. I honestly feel as if I’ve been tainted. Do not take your sons to see this movie.

A friend of mine is a manager of our local theatre. She begged the owner not to let this movie play there. She tried to warn those who were taking pre-teens into this movie. Please, Please, Please reconsider seeing this. I wished I had been warned like this.

Think more of your Christian walk than satisfying a need for this kind of entertainment. One lengthy scene shows 2 naked women underwater swimming sexually all around each other while showing full frontal shots of both women. There is NO way this movie can be excused in your mind as “not that bad.”

I pray you hold to God’s values more than I did.
My Ratings: Moral rating: Extremely Offensive / Moviemaking quality: 4

Christy, age 35 (USA)
Negative—I live in Arizona, so a movie filmed there (here) caught my attention. I am a fan of B-rated movies, so I thought this was going to be great. Going into watch “Piranha 3D,” and its R rating, I assumed it was for blood or language. It was and, also, for extreme nudity. I have never seen a R-rated movie with a whole lot of nudity with girl-on-girl explicit nudity. I felt the nudity ruined the movie. It seemed it couldn’t go 5 minutes without breasts being exposed. The nudity scenes seemed to be over-long, as well.

Micale, age 19 (USA)
Negative—For a “B” movie, which is generally the level associated with this genre of film making, it’s really pretty good: engaging, some good acting, a depiction of a range of human responses to bodily carnage, and appropriate pseudo-scientific quackery.

However, the film ups the gore quotient to somewhat tedious levels, though I’m sure teens would enjoy adequate levels that in today’s market place seem almost a requirement. I rented the film to preview before my teens lay eyes to the cinematic mayhem-fest. However, there’s way too much of a nod to the “Girls Gone Wild” brand of sexuality and girl-kissing-girl frivolity (indeed, the movie mimics much of real show and needs a disclaimer just for that aspect), only this film is in-mixed with cocaine, blood, foul language, alcohol abuse, well… you get the picture. So, maybe don’t get this picture.

There are more than just beautiful babes, cool boats, and skimpy bikinis happening here. I treated the underwater nudity like looking at nice art, but not all men, especially younger ones, are going to have the same reaction, especially given the contextualization of partying and pandering to base drives. Your mileage may vary.

Some of my co-workers took their parents to the 3D movie and everyone came out embarrassed. I’d thought the rating given the movie here in Canada was for the gore and maybe an odd appendage flash. No no.

This movie was horrible. I don’t understand those who listed this a positive. I was amazed at some of the big name actors in it. Fine, do a B movie for the fun of it, but this one… it wasn’t worth the film it was shot on. Don’t see it. The length of full frontal nudity and lesbian scenes as they swam in the water was beyond R rating. Just don’t waste your money, don’t see it, stay away, there are plenty of other movies out there to see. Skip this one.
My Ratings: Moral rating: Extremely Offensive / Moviemaking quality: 1

Andrea, age 38 (USA)
Comments from young people
Negative—Sadly, I probably watched this movie for all the wrong reasons, but now I am here to tell people to STAY AWAY FROM THIS MOVIE!!! Nothing, absolutely nothing in here that is Godly or needs to be seen by Christian eyes.

Gore: Even though it is mostly special effects or animation, the gore level in this movie was just too much to handle. Two scenes were so horrifying, a fish eats its way out of the girl’s mouth and one girl’s facial skin and skull being pulled off when her hair got caught in a boat prop.

Throw in extremely coarse language to all this and you have a movie that NO ONE should see, let alone a God loving Christian.
My Ratings: Moral rating: Extremely Offensive / Moviemaking quality: 3