The Return of the Daughters 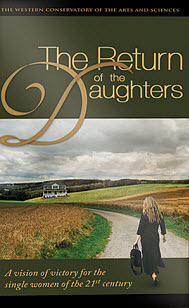 Cooking in the Bible

What about feminism and women’s lib? Answer

“The Return of the Daughters” is an hour long documentary about four single women and one newly married woman whose motive is to challenge our culture’s view that young women must go straight to college, begin a career, and become independent, as opposed to staying at home learning from her father and mother about what her role should be as a Christian woman. Christian fathers are challenged to ask themselves, “What is best for my daughter? Am I just going to put her out of my home as soon she turns 18: ready or not? Is it truly biblical for my young daughter to go out into the world on her own and be independent? Will she be able to defend herself against the secular worldview and lifestyle (lack of morality)? Does college really teach my daughter how to be what God created her to be?” These are all very serious questions a father must ask if he wishes to follow the biblical pattern for femininity and womanhood.

Two twenty-something year old women are the narrators of the film. In the beginning of the film, they make it clear that there is a tension between what our culture believes about womanhood and what the Bible teaches about womanhood. Radical feminism has indeed delivered a powerful blow to the universal church. It is because of this kind of feminism that young women are ignorant and confused about what their true, biblical roles are. This is evident today because women are wrongly ridiculed, scorned and mocked if one even hints at the desire to be a wife and mother. Why is this? Is this right? Is this biblical?

What about feminism and women’s lib? Answer

The biblical basis for this film is Psalm 144:12 which says, “Then our sons in their youth will be like well-nurtured plants, and our daughters will be like pillars carved to adorn a palace.” Other Scriptures mentioned are Malachi 4:6 and Deuteronomy 6. Paul’s exhortation to young single women in Titus 2:4-5 teaches them to love their husbands and children and to work at home in subjection to their husbands. Briefly mentioned is the biblical description of a woman in Proverbs 31. In the end, the narrators make it clear that each family has their own different way of applying the implied principles. However, one thing that they all have in common is that they heavily emphasize every man having a “vision.” The type of “vision” they speak of was unclear to me. Do these women desire men who aspire to have a major impact on the world? Do these single women demand a man who is aiming at the goal of reforming the culture and/or the church? Do these single women simply want a husband who will genuinely love them as Christ loves the church (Eph. 5:25)?

I strongly recommend this film to anyone, especially to a father who has a daughter. Whether you agree with the film’s agenda or not, it will cause you to re-examine what your priorities are. Do you desire your daughter to have worldly success in a depraved, fallen world or can your daughter develop her God given talents and gifts under the protection and direction of a man who is more committed to her than any other man in existence: you. In other words, our culture’s educational system is not the only way for a woman to be educated. In this film, you will clearly see the sincere happiness and contentment in the lives of these women. Some will be offended by the film’s message, it will challenge some, and for some, it will encourage. Take an hour with your family and hear what these young single women have to say about our faith, their role as a woman, and how we should respond to the expectations of a culture that seems to have discarded biblical femininity and womanhood.

Positive—“The Return of the Daughters” is an idea for single women who are the daughters under the leadership of their father. It goes against what the world teaches us. But, it is a wonderful concept that puts hope in the life of their daughters, based on Bible principles. Highly recommend.
My Ratings: Moral rating: Excellent! / Moviemaking quality: 5