Alvin and the Chipmunks: Chip-Wrecked 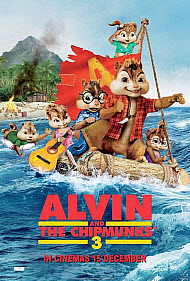 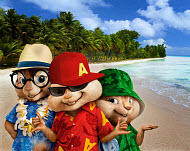 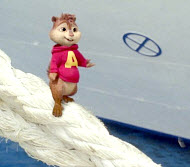 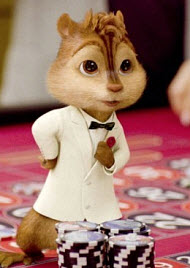 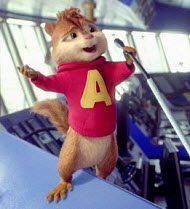 Let me just start off by saying that I saw the first two movies; both were okay. However, the latest installment is better than I expected it to be. I was pleasantly surprised with this film and actually found myself laughing through parts of it. On another positive note, it was nice to see that the producers brought Jason Lee back for a bigger appearance in this third installment. The performances are good by all the actors and actresses. The camera work is decent. The music, apart from a couple questionable song choices, is good, as well.

Violence: Mild. There is a scene where Dave slips on the cruise ship deck. There are couple scenes where characters are hit in the head by small objects. Simon’s foot catches fire in one scene (this is brief,, and he is not injured). There is a scene where Eleanor falls from a zip line and breaks her paw. There are a couple scenes where the main characters are put in danger (these are brief and, again, no one is harmed).

Language: Most of the language is mild compared to what it could’ve been. Alvin mentions to Dave that when they get on the boat they should order a “pina colada.” Alvin slams into a tree while swinging on a vine and exclaims, “Oh my acorns.” The term “chicks” is mentioned a couple times in reference to women.

Sex/Nudity: There was no sex or nudity in the film, and I didn’t expect there would be in a G rated film. However, there are several things worth mentioning. Some women are seen on the ships in bikinis/swimsuits (I couldn’t tell which). The Chipettes sing a song about “wagging their tails back and forth.” Ian and Dave have a conversation, and Ian mentions not wearing anything underneath his costume. Lastly, Simon kisses Jeanette’s hand repeatedly.

Other: The song “Party Rock Anthem” by LMFAO is played during a scene at the ship’s casino. The Chipmunks and the Chippetes, once stranded on the island, sing part of “Bad Romance” by Lady Gaga (in my opinion, not appropriate for a G rated film). “Fire work” by Katy Perry is also sung (some parents may find this objectionable). Eleanor mentions, after she and a few chipmunks walk across a log, that it’s a “good thing we don’t wear pants”

There are many positive elements to this film that are worth mentioning. Alvin, in this third installment, realizes that he has to become a more responsible chipmunk than he was in the past, once he, his brothers, and the Chipettes get stranded on the island. Dave learns that, after having a brief chat with Simon, he has to be more trustworthy when it comes to raising the Chipmunks and the Chipettes. The Bible talks about trust and how we should always trust in God for whatever or whenever we need him…

“Trust in the Lord with all your heart, and lean not on your own understanding; in all your ways submit to Him… and he will make your paths straight.” —Proverbs 3:4-6 (New International Version)

Overall, this installment of Alvin and the Chipmunks is fairly decent. In my opinion, it is slightly cleaner than the first two films. Will there be a fourth? Who knows? I can only recommend this movie with some caution, due to some of the objectionable items mentioned in the review. Be sure to stay through the beginning of the credits for an extra scene.

Neutral
Neutral—My mom (58) and I (35) took my boys, ages 3 and 6, to see this movie while we were visiting for Christmas. They absolutely loved it, and honestly, I thought it was pretty cute, too. The movie did a decent job of reeling the older generation back in with chipmunk-adapted scenes from other movies (“Indiana Jones…,” “Castaway,” etc.). The overall “moral of the story” was great… even if they (of course) end with another “Aaallll-vvviiinnn!!!…” moment, negating the lesson you just learned in the movie.

My objections are those in the description above… gambling, immodest attire (even for a chipmunk), provocative dance, and so on. If you discuss this with your children or go without them, and if you view it as just another silly movie, you’ll enjoy it. If you look at movies with a very strict, conservative eye, you’ll definitely want to avoid this one. Take it or leave it. It’s cute, but that’s all… just cute.
My Ratings: Moral rating: Better than Average / Moviemaking quality: 4

Mom, age 35 (USA)
Negative
Negative—I saw this movie with my grandchildren. They did not think that it was very good. I did not consider it worthwhile. In my opinion, it was bad enough that most of the chipmunks deliberately disobeyed Dave by sneaking out of the cabin, but it got worse when we see that they have ended up in a casino. Alvin is gambling, and the girls are dancing like the humans, which I can only describe as dirty dancing. I was not expecting this from a movie rated G.
My Ratings: Moral rating: Average / Moviemaking quality: 3

Donna, age 60 (USA)
Negative—Went with the kids of a family friend, expecting a light-hearted movie peppered with clean secular songs. Was severely disappointed from the beginning. Alvin’s actions are extremely disrespectful and bratty towards authority. This is something one may expect from the character, but it seemed to me that it definitely crossed the line from mischievousness to outright disrespect. This movie seems to glorify the disobedience of Alvin, rather than show the consequences of his actions.

While watching this, I expected to see a change of heart from Alvin, as his brother Simon, the voice of reason in the movies, reasoned with him. However, instead of this, the moviemakers decided to make Simon act like Alvin. While he returned to his normal state later in the movie, the point was made that everyone can loosen up more and that sometimes rules need to be broken. Dave even goes to the point of apologizing for being so strict with Alvin.

In my opinion, having your children watch this movie is asking for disciplinary problems. Another thing I didn’t like was the use of music in this particular movie. I do not think Lady Gaga is appropriate for children under 12, especially the song “Bad Romance”.
My Ratings: Moral rating: Offensive / Moviemaking quality: 1

Sadie, age 20 (USA)
Negative—At the end of the film they let the chipettes sing Lady Gaga I was born this way song. This is a song that is a direct insult to our Lord and Saviour Jesus Christ. This movie is alright through it, but, at the end, they put their real agenda on, which is homosexuality.
My Ratings: Moral rating: Extremely Offensive / Moviemaking quality: 3

Deon, age 29 (Bahamas)
Comments from young people
Positive—This was a great movie. The only thing that might be frightening is the volcano erupting and the crazy lady on the island. Other than that, it is a cute movie. I suggest it to kids about 7 and up.
My Ratings: Moral rating: Good / Moviemaking quality: 4½

Sarah, age 11 (USA)
Positive—This movie is really cute. It reminded me of “Puss in Boots” the way Simon the chipmunk with glasses talked and acted. I saw it on DVD and thought it was cute. Was it my favorite Alvin and the chipmunks movie? No, I think they could have done better. One thing I didn’t like was all the music that Lady Gaga sings in it. But, overall, it is a cute movie. Am I begging you to see it? No. But you will have to be the judge of that.
My Ratings: Moral rating: Average / Moviemaking quality: 3