for some disturbing sequences, and language. 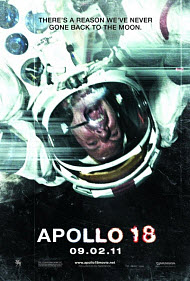 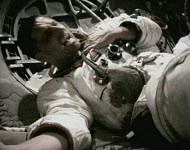 moon in the Bible

“‘Blair Witch Project’ goes to the moon at ‘ludicrous speed’…”

Those who have seen “The Blair Witch Project” will notice some similarities to Apollo 18, though the story ideas that are borrowed are executed in, at best, a mediocre fashion. The premise of the film is that 84 hours of video footage from three astronauts on a secret trip to the moon has been found, returned, and edited for viewing.

The video begins during the planning and preparation for a clandestine Department of Defense mission to place spy satellites on the moon. When the men land on the moon, they encounter many strange sights. A Soviet ship, a fallen Soviet flag, and many footprints are found, when the astronauts leave their lunar vehicle.

The story continues with a soundtrack full of heavy breathing, footsteps, laughing, popping, and clicking. The shots jump and fade in and out to give them an “authentic” look.

As astronauts Nate and Ben walk about the moon, Nate discovers something in his spacesuit. He removes his helmet (yes, he does, and survives!), and Ben brings him safely back to the ship. Once inside (in a somewhat gory sequence), they remove a moon rock from Nate’s stomach. After that, Nate gets sick, becoming all kinds of colors, along with bloodshot eyes and weird, enlarged veins. Nate also becomes paranoid and is sure the U.S. Department of Defense is using them as guinea pigs. (For what, who knows?)

Ben tries to remain the voice of reason, but they both continue to explore in order to solve the mystery. Of course, they encounter “cold spots,” noises, and other creepy stuff, along with a few well-placed explosions for dramatic effect. Meanwhile, the communications between ground control in Houston, the mother ship, and the men on the moon goes in and out at appropriately dangerous times, but an important line does make it through—“Houston, we have a problem…”

The story continues to spiral downward and become more and more unbelievable, while attempting to keep the action and suspense going. The moon rocks begin to turn into some kind of bug (yes, bugs), which chase the men around. Eventually, overrun by the strange bugs and running low on oxygen, Ben flees to the Soviet ship, leaving Nate behind (Ben apparently ignores Jesus’ words in John 15:13: “Greater love has no one than this, that he lay down his life for his friends.”) Ben proceeds to fly the unknown foreign ship expertly back to the mother ship. In the meantime, the Department of Defense refuses to allow the men to return to Earth. Of course, how the video footage turned up is never clear, but we are supposed to be left fearful of all the moon rocks that have previously been brought home to Earth that are bound to turn into the creepy bugs.

All the ways “Apollo 18” departs from any sort of credible reality would be impossible to list here. The words of Isaiah 29:14 sum it up nicely: “the wisdom of the wise will perish; the intelligence of the intelligent will vanish.”

Most adults will know better than to waste their time on such a useless movie, but the film seems to be popular with teenagers. Most of the action is harmless, the violence is minimal, but the language is obnoxious. I stopped counting the obscenities when h*ll got beyond 15 and the misuses of the Lord’s name passed 20. Additionally, other vulgarities such as pr**k and d**k are used here and there. A party including heavy beer drinking by the astronauts is mentioned, too. Parents should use great discretion when deciding whether to allow their teens to see this film. Proverbs 4 gives some good advice, especially Proverbs 4:23: “Above all else, guard your heart, for it is the wellspring of life.”

Positive
Positive—Despite the movie’s absurd premise, I found it enjoyable and cleverly done. The filmmakers did a good job of making the footage appear old and grainy, which ironically makes it easier to suspend disbelief, if they had gone for flashy special effects. Surprisingly enough, this movie was extremely well researched, in terms of how it depicted the equipment and technical jargon used by the astronauts.

While I agree with the reviewer’s observations regarding negative moral elements, the film does contain some positive parts. For example, there is a scene in which the Command Module pilot puts himself at risk in order to save the life of another. Basically, if you enjoy fun science fiction movies you don’t have to think much about, I recommend this movie for its unique approach to the genre.
My Ratings: Moral rating: Average / Moviemaking quality: 4½

Andy, age 24 (USA)
Neutral
Neutral—Interesting conspiracy plot about alien rock-critters infecting unsuspecting moon astronauts, who were sent to the moon by the bad, bad DoD people who didn’t tell them they’d be in danger and who covered up the resulting disaster. From other comments, I guess there was a lot of inappropriate language, but I didn’t notice it because I was focusing on the plot and the video presentation, which was well-done in a 1970s, scratchy-film, format.
My Ratings: Moral rating: Better than Average / Moviemaking quality: 4

Mark, age 61 (USA)
Negative
Negative—This has been the year of the “Bug” Alien-and this movie continues that theme. Hollywood must have a warehouse full of these little critters. This movies only saving grace is that the predictable carnage is mostly shot in black and white. Because it is also suppose to be done mostly on hand held “Kodachrome” movie cameras, it is very jerky and often out of focus. There were a fair amount of loser movies this year, but this one is fighting for the bottom slot.

People lose, aliens win, government lies, and I was out eight bucks. I can truly not find any reason to encourage anyone to bother seeing this mess. It isn’t even worthy of the conspiracy lovers time. The language is also an on going problem and it is hard to equate the damage and shadows with the size of the enemies. The trailers and movie posters have a tendency to lead one to believe what the movie does not pan out.
My Ratings: Moral rating: Very Offensive / Moviemaking quality: 1½

Dorell Proshek, age 50 (USA)
Negative—I was really looking forward to this movie. I thought it was going to be based on the missing transmission from the Aldrin landing, when NASA began broadcasting transmissions with a delay, so they could screen information. Needless to say, the movie was made in a Blair Witch style “home movie” style. It made many scenes jumpy and irritating to watch. Long story short, “what was on the moon” was very disappointing. Unless you have seen everything else that is in the theaters now… don’t waste your money.
My Ratings: Moral rating: Average / Moviemaking quality: 3

Tracy, age 42 (USA)
Negative—…The movie did not impress me as much as I thought it would. I was under the influence that it would be another space movie where the good guys escape, blowing up all the bad aliens, however, the plot followed the guidelines of “everybody is fine, the American government steps in and messes up so many lives… . And the bad guys win.”

I have always tried to give every movie the benefit of the doubt, but the movie was just too much. Too many jolts. Too much fake-footage. And way too many unanswered questions and unnecessary curse-words. Add those factors to a story-line that does not progress, and that has literally no point whatsoever, and you get movies like these. All that I learned from this movie is that, the US government is way too typecast in modern movies, and that with lots of intense, shaky camera-shots and poor story writing, anybody can make a Sci-Fi thriller.

Had I not witnessed my nephew pay $9.50 per ticket for me, his brother, and himself, I would have left. There was no inspiration, no plot and no purpose.
My Ratings: Moral rating: Average / Moviemaking quality: 4

Jakob Korona, age 25 (USA)
Negative—I had read the reviews here, but decided to see the movie anyway. If you want to waste 10 dollars then go see this movie. I will say that it was not the worst movie I have ever saw nor the most offensive. It was one of the movies with the most shallow of a plot. The movie just had so much cussing in it. I wish they would make a movie without foul language as honestly there is no need for it.

The movie was sort of short which actually was a good thing seeing how the plot was shallow. After watching the whole thing and hoping to find at least a little bit of a happy ending there was none. I would wait for this one to come out on DVD and wait till you are extremely bored if I was to watch it. Even then I would just find something better to watch.
My Ratings: Moral rating: Offensive / Moviemaking quality: 2

Austin Ziegenfuss, age 22 (USA)
Comments from young people
Neutral—“Apollo 18” was one of those very slow movies that doesn’t pick up until the last 10 minutes of the film. The plot and acting were both mediocre, and the movie didn’t scare me in the slightest. The suspense relied mostly on noises and random movements, here and there. There was quite a bit of language, no nudity or anything. Overall, it was a very mediocre film…. I probably wouldn’t recommend it.
My Ratings: Moral rating: Average / Moviemaking quality: 2

Aliya Mcreynolds, age 14 (USA)
Negative—Another shallow movie with no redeeming value at all. Claims to have been compiled from “actual found footage,” well I ask you this, how could the footage exist if the ship was destroyed? This movie is completely lies, nothing else.

Can you remember when the Sherif arrested the bad guy and the movie was over? What will the deprived race of man come up with next. We’ve strayed so far away from Jesus, he’s what this world is all about, and as soon as we forget that it’s over. Pray for the producers pray that God will open there eyes, that they will repent. The world needs Christ. Jesus Christ, soon to return!
My Ratings: Moral rating: Average / Moviemaking quality: 3½

Lisa Shappley, age 52 (USA)
Negative—I rushed around on the Internet Friday afternoon before my wife and I were due to see this movie early Friday evening. During the week there was just nothing available that reviewed this film. Luckily, I found a few reviews before going to see it, and I’m glad we missed it. The budget for this film was $5 million. Most films spend more than that on advertising alone. This movie may go down as one the worst ever from what I read.