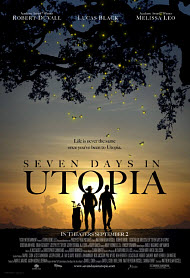 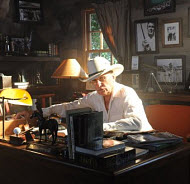 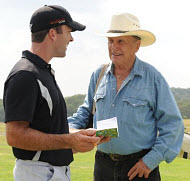 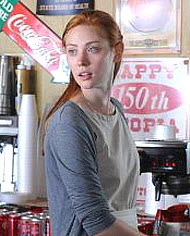 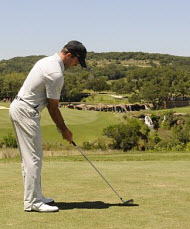 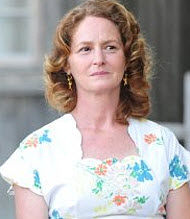 dealing with the benefits and downfalls of fame and success

“Life is never the same, once you’ve been to Utopia.”

Whether you turn to the right or to the left, your ears will hear a voice behind you, saying, “This is the way; walk in it” —Isaiah 30:21.

This is the advice that begins David L. Cook’s latest novel-turned-movie. Cook draws on his experience as a sports psychologist and uses the many tales he has heard through the years to compile an interesting story.

A young man named Luke Chisolm (Lucas Black) loses an important golf tournament, which causes a bitter separation between himself and his father, who serves as Luke’s caddy. Luke flees in anger out into the country and finds himself in a small town called Utopia, where he meets a crusty older man named Johnny (Robert Duvall).

Johnny, a former golfer, offers to give Luke some golf advice, and challenges Luke to spend seven days in Utopia. Johnny uses some eccentric methods to help Luke with his golf game, while giving him some good life lessons. (Think Mr. Miyagi in “Karate Kid”).

The townsfolk, including pretty Sarah (Deborah Ann Woll), adopt Luke, and offer many friendly words of wisdom. After spending his seven days in Utopia, Luke’s life is dramatically changed. He finds he can forgive his father, as Jesus admonishes in Matthew 6:14-15 and in the other three gospels and which Paul reminds us in Colossians 3:13.

Luke’s father, Martin, played somewhat weakly (and with a little too much mumbling) by Joseph Lyle Taylor, has to deal with his own shortcomings as a father, and the fact that he often pushes Luke too hard. He forgot the advice in Ephesians 6:4:

“Fathers, do not exasperate your children.”

Martin’s parallel life struggle is not shown, but is insinuated vaguely at the end of the film. As Luke and Martin both own up to their failures and mend their relationship, we see clearly that “Love never fails” (1 Corinthians 13:8).

Lucas Black and Robert Duvall turn in excellent performances. Duvall plays his usual crusty, no-nonsense character and Lucas Black is very expressive, both when he’s happy and smiles a crooked smile, and when he’s agonizing over his life. Deborah Ann Woll and the other supporting characters do very well, oftentimes despite small roles in the story.

Some of the filming is a bit choppy, including several flashbacks that aren’t really needed, but all-in-all the heart of the story is a good one. Viewers have to look past some rather unbelievable scenes, like Luke painting a picture better than would be expected of most amateurs and riding a horse like he’s ridden one all his life. Also, the product placement is noticeably prolific.

The musical score (by composer Klaus Badelt) is very engaging and well done, as is the cinematography of the golf courses and other Texas locations. The final montage sequence is backed by a beautiful song, “Born Again,” by contemporary Christian recording artist Mac Powell.

Toward the end, the film gets a little slow, and the final golf tournament isn’t quite as exciting as other sports films of this genre, but, like the others, where you know what will happen in the end, you will enjoy the journey getting there.

I recommend “Seven Days in Utopia,” especially for those who enjoyed similar light movies such as “Doc Hollywood” or “Tin Cup.”

Like other G-rated films, “Seven Days in Utopia” is mostly free of violence or other objectionable content, except for a rodeo and a couple of low-key fistfights. However, since the story is geared toward older children and adults, younger children may not be interested.

“Seven Days in Utopia” presents a gentle spiritual message well. The film will spark discussion among believers, as well as non-believers, and therefore may be good for those who are looking to reach out to others.

The end of the film guides the viewer to a Web site that includes a tour by David Cook of some of the areas used in the movie. Also, on the Web site, a clear Bible message is given that offers advice and help to those who may need it, aptly summarizing the “See it, Feel it, Trust it” theme of “Seven Days in Utopia.”

SEVEN DAYS IN UTOPIA is based on the best-selling book Golf’s Sacred Journey: Seven Days at the Links in Utopia by Dr. David Cook.

Dr. Cook is a devout Christian whose ministry and retreat center in Utopia, Texas has helped transform the lives of countless men and their families. His faith and principles are woven throughout his book and now the movie, SEVEN DAYS IN UTOPIA, where he is credited as a screenwriter. In addition to his ministry, he is a renowned sports psychologist who has been at the center of action in the sports world where he has helped professional athletes, from teams including the San Antonio Spurs and Washington Wizards, deal with the benefits and downfall of their fame and success. Golf Digest named him one of the top 10 Mental Game Experts in the country.

Dr. Cook is one of the country’s top sport psychology consultants and motivational speaker. He has worked with over 100 PGA Tour players, been a featured speaker at two PGA National Teaching and Coaching Summits, and directed the PGA’s Playing Pschology Workshops for the past 14 years. Dr. Cook also serves as sport psychology coach to the 1999 World Champion San Antonio Spurs (1996-present), and has worked with top performers in the NFL, Major League Baseball, Olympics, collegiate national championship teams, and Fortune 500 companies. His peers elected him president of the National Sport Psycholoy Academy in 1992. Dr. Cook served as Director of Applied Sport and Performance Psychology at the University of Kansas from 1984 -1996. He currently serves as President of Mental Advantage, Inc. a performance enhancement firm bridging the gap between the arenas of sport and business.

Comments below:
Positive
Positive—Love the movie, was very moving and love Robert Duvall in this picture! My daughter and I cried!
My Ratings: Moral rating: Good / Moviemaking quality: 5

Pam, age 54 (USA)
Positive—This was a wonderful movie, and I would recommend it to anyone. Don’t think this movie is a mindless, no-thinking type. It has true meaning.
My Ratings: Moral rating: Excellent! / Moviemaking quality: 5

Angela, age 40 (USA)
Positive—This is an average movie with an excellent message. At the end of the movie, the acting is irrelevant, and the lessons have captured you. I applaud the producers of this movie for their taking a chance in a secular culture that is generally averse to a Christian message. One of the best movies that I have seen in years, and we go to the movies 2-3 times a month.
My Ratings: Moral rating: Excellent! / Moviemaking quality: 4

Randy Breedlove, age 64 (USA)
Positive—First of all, I do applaud the producers for coming out with a “Christian-based” movie… always refreshing among all the muck out there! Overall, we liked it, however we found it to be slow moving… not a lot of action, still we liked it overall though. It’s the meek version of a “Karate Kid” plot—where Johnny teaches the main character, Luke, to do various things that are aimed to help him with his golf game, and learns to not let it be his entire life.

Am I the only one who found “new age connotations” to it though? How about that line that Robert Duvall (Johnny) feeds Luke about how God is around… “everywhere” and inside each and EVERY person… ??!! Totally false. God (the Holy Spirit) resides ONLY in those who have been born again—who have turned to the Lord in humble repentance, nailing their old selves, their old lifestyles to the cross, and have committed to follow Jesus as Savior and Lord, which includes obeying His New Testament commandments and living a holy lifestyle as the Bible instructs. If we love Him we will obey Him, according to Scripture. See all »
Doesn’t mean we’re perfect, we’ll still fall down and skin our knees, but we will not sin on purpose!! When we do get our feet dirty by the sin of this world, we report for daily foot washing. Only to those who receive Him, does God give the right to become His children. Jesus is not “just a way” to heaven, and to God—Jesus is THE ONLY WAY!!!… Not a “pc thing” to say in today’s time, that’s because the LIE that will permeate the Tribulation era {soon after the rapture} is already here and in full swing even now—that “all paths” lead to God, and that we “all worship the same God”. Nothing could be further from the truth!!

Jesus is the way, the truth, and the life—NO MAN comes to the Father, except through JESUS!! There is no other name under heaven whereby we must be saved. I may get slammed for “preaching” but the truth needs to be said. That one line in the movie is poisonous and FALSE, and can be responsible for leading multitudes to hell.

R J, age 52 (USA)
Positive—One of the best movies we have seen all year. Will probably get the Blu Ray DVD!
My Ratings: Moral rating: Excellent! / Moviemaking quality: 5

Jim Bob, age 65 (USA)
Positive—This was a sweet movie. I was pleasantly surprised that it didn’t go down the typical Hollywood roads that I expected it to. Examples: The main character, Luke Chisholm, wasn’t a total jerk when he ended up stuck in a small town. He had just lost sight of what was important. Another example would be Luke’s overbearing father, who pushed him to win at golf. His character wasn’t portrayed as the overall mean bad guy; just a flawed person who held the wrong things as highest in his life. So this movie was okay… a nice, interesting family film that completely deserves its G rating.
My Ratings: Moral rating: Good / Moviemaking quality: 4