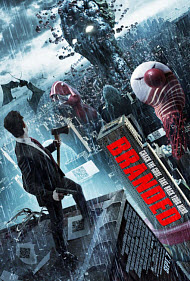 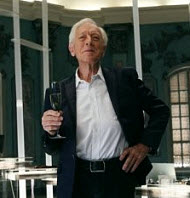 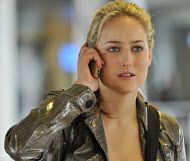 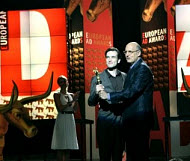 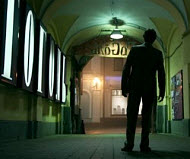 the power of modern marketing and advertising

“Crack the code. Take back your mind.”

“Branded” is about a dystopian society where advertisers control the masses. It was written and directed by Jamie Bradshaw and Alexander Doulerain, who themselves are advertising executives and brand specialists. In the film, the public is unaware of the control they are under, and even the advertisers don’t comprehend the power they hold. One man, Misha (Ed Stoppard), can actually see the pull of each brand on a person, much like a symbiont. However, it takes a while for us to get to that point in the film, but that was the part I was most looking forward to.

We start off with Misha as a child in Moscow. He gets struck by lighting and told by a woman that he will have an interesting life. We move ahead a number of years and eventually get to Misha as an advertising executive, struggling to make partner. His boss’s niece, Abby (Leelee Sobieski) is in town, and they eventually begin a romantic relationship. Abby is working on a television show called “Extreme Cosmetic,” in which an overweight, unattractive woman is chosen to undergo multiple surgeries to be made slim and pretty. Lest you think this sounds outrageous, let me remind everyone of a show called “The Swan” that aired on Fox in 2004. Truly an absurd idea, in this reviewer’s mind, that a show could air in which a contestant does indeed undergo numerous cosmetic procedures to supposedly build their confidence. Yet, I remember this show and thought of it instantly as I watched “Branded.”

Misha encourages Abby to produce the show. Meanwhile, on a Polynesian island is a marketing guru played by Max Von Sydow, who is on a quest to …”make fat beautiful again.” “Fat is fabulous.” So the marketing guru plans his attack on the current idea of beauty. As the public becomes outraged at the cosmetic show, Misha’s future in advertising begins to unravel. During this time, he retreats to become a shepherd, forsaking all modern conveniences. While on his personal hiatus, if you will, he has a dream …of himself having a dream. And in this dream within a dream, he is shown what he must do. Upon awakening, he performs a ritualistic sacrifice of a red heifer, much like the sacrifice in the Bible in Numbers 19. In biblical times, a sacrifice was made of a red heifer to cleanse oneself from impurities. After the animal was burned, the ashes were put in water, and the water was used to bathe and cleanse the impure. The same happens in the film.

After his cleansing, Misha returns to Moscow and discovers he can see the brand on each person, but no one else can see anything. This causes him to behave oddly, prompting Abby to believe he needs to see a doctor. After some time, Misha comes to terms with his ability and uses it to manipulate marketing strategies and builds himself a grand company that is able to fight and win the brand wars. Simply put, in order for a company to do well, it simply has to get the public to believe that its competitors’ product is, in some way, a danger. Once the public becomes fearful or wary of that product, the stage is set to introduce the competition. This is exactly how it plays out, yet there are dire consequences, which I will leave to the movie.

At first, I thought this film would be a cross between “The Matrix” and the modern advertising world, but it was far from that. It was more cerebral—very much an independent film. “The Matrix” also centers on a dystopian society but does so in typical Hollywood fashion. “Branded” is presented in a semi documentary format narrated by a third entity. I applaud its efforts to show the dystopian world driven by marketing and consumerism, but it lacks something. Often, we want our films to be an escape, and that is perhaps where it falls short. It is almost like a documentary, but too absurd to be one, yet not absurd enough to be an escapist film. However, it certainly does its job, as my husband and I continued to talk about it at length on our ride home. During the film, I found myself thinking about stopping for a coffee afterward. As we went out to get our coffees, we joked about the brand that was attached to our own backs that was appeased as we drank our lattés. My point is this, odd as this movie may be, it makes a valid argument. We are driven by consumerism. Especially in regards to food brands, we do begin to crave something. As an old potato chip commercial once stated “No one can eat just one,” and it is true. Oftentimes, we have our favorite place to grab a coffee on the run, certain foods we mindlessly eat while watching the game, the fast food place we stop at to appease the hungry children, as well as the brand loyalty others may have in regards to clothing and fashion. And so it goes.

Yet, the Bible tells us in 1 John 2:16 (ESV)—“For all that is in the world—the desires of the flesh and the desires of the eyes and pride in possessions—is not from the Father but is from the world.” Hebrews 13:5 also says, “Keep your life free from love of money, and be content with what you have, for he has said, “I will never leave you nor forsake you.’”

Misha’s character, at one point, does talk about some of the things he did to make money—and lots of it. There are many other references in the Bible to materialism and whereas I don’t feel that focusing on materialism itself is the point of this film, advertisers do seek to instill in us a desire to buy something. One of the writers and directors, Jamie Bradshaw, said “…marketing is fundamentally sculpting and shaping the identity of people,” and we see that done in the movie. In regards to his film, he goes on to say, “It’s a film fundamentally defined by the truth, and I don’t think that most of the films that I see are very truth-inspired these days.” That is ultimately what makes this film work for me. The point of the film is to expose the machine of advertising itself and get one to think.

I’ve seen a few reviews that say there are invading aliens in “Branded” or that they thought it would be a monster movie. To clarify, this is not an alien movie nor a monster movie. It’s a concrete visual on the abstract concept of brand wars. I do find the brands taking on a life of their own to be the most fun of the movie and love one scene where a brand becomes so big, it actually hatches and out of it flies away as a dragon. That was fun. I would have loved to see more of that.

So, I do recommend this film, but not to those who like the Hollywood format of a big budget picture. This film is more for someone who already likes independent fare, who is willing to hear a message in their entertainment—and not out just for escapism. By far, the best parts of the film, in my mind, take place once Misha can see the brands on people. I do wish this had been introduced sooner in the film. This movie is interesting and does have some neat ideas. If you can get past the objectionable content and do enjoy independent films, as well as dystopian films, such as “The Matrix” and “Equilibrium,” give it a try. If you do not enjoy independent films, odds are you will not enjoy this one.

Objectionable Content: Rear full body shot of naked man, sex scene in a car with no nudity, but hot and heavy, nonetheless / shots of female in a bra changing clothes in her car.

Negative
Negative—Movie was dull and boring; we saw it at a IMAX opening nite in Ontario, Ca. There were only abou 8-10 other people, and most left before it was over. My date wanted to go, too, but it was very hot outside, and the A/C was great, so we stayed to the end. I have never sat center in a almost empty theater; this in itself was interesting and a little spookie.
My Ratings: Moral rating: Average / Moviemaking quality: 1

Sal, age 60 (USA)
Negative—Too much nudity and does not give out good morals.
My Ratings: Moral rating: Extremely Offensive / Moviemaking quality: 2