for sexuality, some crude humor, partying and language. 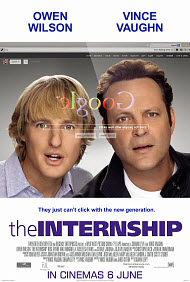 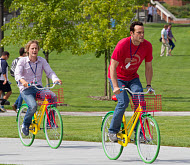 It’s never too late for a fresh take on life.

sincere enthusiasm is infectious and inspiring

the importance of connecting with people

enjoy the people around you

How to find a job, in a ministry

“Hiring them was a brilliant mistake.”

When long-time friends and sales partners Nick and Billy field one of Google’s infamous off-the-wall questions during their initial internship interview—a question involving being shrunk to the size of a nickel and placed in a blender—they innocently believe that the opportunity in front of them will be their escape from the figurative blender in question. Little do they realize that they won’t even enter the blender until after they’ve landed two coveted spots in Google’s competitive summer internship program. In the kid-eat-kid world of Silicon Valley, Nick and Billy look and feel about as antiquated as a pair of old rotary phones.

Undaunted by differences in age, ability, metabolism, and tech savvy, Nick and Billy dive headfirst into the world of HTML5 and C++ with a level of youthful enthusiasm that is all but completely wasted on their ragtag band of brilliant, but predictably odd internship teammates. (The smart, sex obsessed virgin [Neha], the tightly-wound homeschooler with a Tiger Mom [Yo-Yo], and the reserved and appropriately cynical cool guy [Stuart].)

Summer internship spots at Google are hard to come by, and jobs at the Internet search giant are as elusive as they are prestigious. The less-than-dynamic duo is given the daunting task of bringing their group of oddballs and misfits together as they take on low expectations, fierce competition, budding romantic relationships, and ghosts of the past, in order to win the internship challenges and lay their hands on that Golden Goose. Still smarting from the pain of having their beloved sales positions ripped from their still-warm fingers, the two intrepid journeymen hope to break free from stagnant pasts and into a future they have been avoiding for too long.

What works here is the now-classic pairing of Owen Wilson and Vince Vaughn in the main roles of Nick and Billy. Their chemistry is as palpable as ever, and their trademark rapid-fire repartee is still aces. As expected, Owen’s charm is goofy and lovable, and Vaughn’s delivery is both long-winded and sharp. They are at their finest when playing off one another, and their flare for witty repartee shines brightest when Vince delivers a brilliantly ignorant pitch for a photo-sharing app called “Exchange-A-Gram.”

We see the two men grow as friends, employees, and individuals, while encouraging each other and their team of lonely, outcast computer geeks. There are more than a few moments that warm our hearts, even while the heart of the story feels a bit stale.

This is where we run into the portions of the film that don’t work quite as well. (The parts that are afflicted with, ahem, “bugs in their code.”) Nothing feels particularly fresh about the film. In fact, it often struggles to break free from the cookie cutter molds it feels stuck inside. The Wilson-Vaughn dynamic is well-oiled and funny, but the story itself is fair-to-middling, and the characters, while lovable, are just barely more than one-dimensional.

Unfortunately, the film is also unnecessarily weighed down by baggage of a different sort. As we have come to expect from movies featuring Vince and Owen, the proceedings are heavily reliant on sexually-charged humor and often marred by language. Language is the most frequent issue we encounter. “Sh*t” tallied 29 mentions among its various forms by the time the credits rolled. Not content to leave the human backside alone, the word “a**” earned itself 18 mentions. Abuses of the Lord’s name crept into the double digits, as did uses of the word “h*ll.” Mercifully unable to break free of the single digits were “d*mn” and “b*tch,” though it was close in both cases. We aren’t forced to swallow a multitude of “F-Bombs,” but one does make its seemingly-obligatory PG-13 movie appearance.

This type of humor is placed center stage when Nick and Billy accidentally bring their team to a strip club during a team bonding experience. Dancers are seen in various forms of lingerie, both dry and wet, during extended shots inside the strip club. Young interns receive a lap dance or three (complete with suggested orgasms, in one case) and viewers are “treated” to lingering shots of Lyle’s (the group’s team manager) dance instructor in very skimpy attire as she shimmies and shakes across stage during a fairly lengthy sequence. Billy has a live-in girlfriend who breaks up with him after he loses his job and their house is foreclosed on. We see Nick and Dana (a higher ranking Google employee) kiss, and it is implied that they sleep together at the conclusion of their first date.

Violence is infrequent, but what we do see looks painful. One man gets slugged in the face while another takes a shot between the legs, which is replayed several times during the credits. Two other men are on the receiving end of vicious blows to their manhood. An honor-and-alcohol-fueled brawl breaks out at the end of the trip to the strip club, and several people get punched, kicked, and tossed around during the melee.

Speaking of alcohol, we see several characters quaffing various forms during the film, including shots of hard liquor, and we look on as Nick and Billy pressure Yo-Yo into drinking for the first time (though it is made clear that he is 21). He subsequently gets hammered, and his inebriated antics are mixed in with the rest of the lengthy strip club proceedings. The younger interns suffer from hangovers after the wild night, and Nick informs them that “… that’s how great memories are made.”

There are a lot of things to enjoy and appreciate in the film. Fans of Wilson and Vaughn’s previous work will feel right at home. The bond that their characters share is a great reminder of the truth of Proverbs 18:24. The pair charms their way into the hearts of their much-younger peers, as they very quickly and naturally take on the role of unofficial older brothers. Their methods aren’t always commendable, but their hearts always seem to be in the right place. They encourage their teammates to overcome obstacles, both real and perceived, and their sincere enthusiasm is infectious and inspiring. We are reminded that we are not defined by our past mistakes. That it’s never too late for a fresh take on life. That it’s important to let go of expectations and pressure (self-imposed and otherwise) in order to enjoy the people around you. The importance of connecting with people, versus simply connecting people with information and ignoring their humanity is spoken to throughout the film and underscored in the finale.

The many nuggets of encouragement and simple wisdom populating the landscape of “The Internship” leave one wishing that those moments had been packaged in a better overall movie. There are a few scenes within that are brilliantly done and very clever, but they are, sadly, few and far between. There is evidence of heart and warmth present in the film, but those instances are almost always sandwiched between unfortunate blends of language and sexual humor. The film’s winking acceptance of casual sex outside the confines of marriage is subtle, but is almost more troubling as such, since it’s harder to identify and thusly more difficult to challenge.

What we are left with is an average film that fails to live up to its potential and often muddies the good that it does have to offer with an array of content that is less than savory. It’s amusing, but rather unsatisfying. Older fans of Wilson and Vaughn will likely find enough of what they love about the duo to watch it once, but it’s unlikely that it will enjoy levels of success similar to some of their previous efforts (like their raunchy, but well-received turn in “Wedding Crashers”). Parents, on the other hand, will likely find they are better off leaving “Safe Search” on and looking for laughs in more family-friendly territory.

Positive
Positive—This movie was surprisingly good. I enjoyed the comedic nature of both Wilson and Vaughn. While the movie does have a very long scene that includes a strip club, this movie should not be downgraded because of it. If you are watching at home simply skip this scene (most things are explained right after in a cool-down scene overlooking the Golden Gate Bridge).

Overall, this movie shows what life is like for twenty-somethings in this work driven world. Showing them striving for jobs that are practically unattainable because they have no other choice. Being a young man myself I was impressed at how they showed this. There are definitely some things that could have been taken out of this movie to make it more appropriate, but, for the most part, it is a good movie. Includes profanity, innuendos, straight on sexual references, and a very lengthy strip sequence (about five—seven minutes in length that can be skipped over without losing plot details)
My Ratings: Moral rating: Average / Moviemaking quality: 4

Christopher Luchies, age 19 (Canada)
Negative
Negative—The movie was okay, mildly funny, however an extensively long and totally unnecessary, and relatively graphic, strip club scene with lap dances and plenty of women mostly not dressed ruined the movie for my girlfriend and I. It was so long and bad and unnecessary, and ruined the comedic spirit of the movie, we left. I do NOT recommend this movie at all.
My Ratings: Moral rating: Very Offensive / Moviemaking quality: 3

Luke, age 40 (USA)
Negative—This movie, put plain and simple was disgusting and stupid. It is certainly one that no Christian should view. Eph 5:3-4—But among you there must not be either sexual immorality, impurity of any kind, or greed, as these are not fitting for the saints. Neither should there be vulgar speech, foolish talk, or coarse jesting—all of which are out of character—but rather thanksgiving. We are not to use foolish talk or coarse jesting so we certainly should not be entertained by it. We certainly should not be entertained by the sexual immorality going on in this movie. For that reason, my wife and I got up and left when a night club scene started. We should have left sooner.
My Ratings: Moral rating: Offensive / Moviemaking quality: 2

Terrell Murrell, age 67 (USA)
Comments from non-viewers
Negative—This movie was extremely stupid, not funny and dirty. Don't waste your time or money. We left when they showed the nightclub scene that was vulgar and trashy. Wish we would have left sooner-on second thought, I'm sorry I even went.