for some mild language and rude humor. 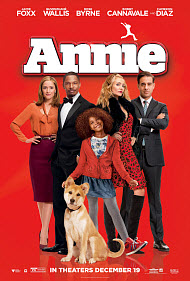 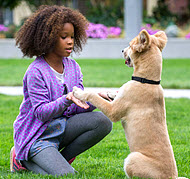 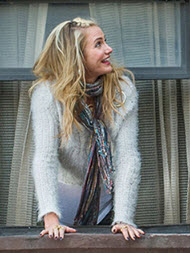 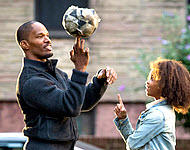 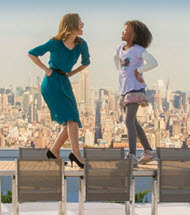 Abandonment of a young child by parents

Death of a parent 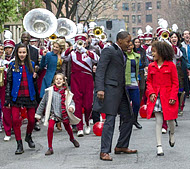 Is it a “Hard Knock Life” for the newest version of Little Orphan Annie produced by Will Smith and Jay Z? This modernized version while entertaining fell a little flat for me.

The actress who plays Annie is a talented and beautiful girl. She does the ever upbeat Annie well. This updated version of “Annie” is not in an orphanage; she is now a child in the foster care system. Her foster mother, Miss Hannigan (played by Cameron Diaz) is portrayed closely to the original character. She is still an alcoholic who doesn’t like the five girls she is fostering. She is only doing it for the money.

Jamie Foxx portrays the “Daddy Warbucks” of the movie, except his name is changed to Will Stacks. He is a self-made billionaire and the CEO of his own cell phone company. He is running for mayor to help further his business and good publicity. It’s his conniving campaign manager, Guy that decides adopting a child would help Mr. Stacks’ popularity at the polls.

The story plot continues, sticking fairly close to the original, but with modern twists. Just as in the original, the characters tend to burst out in song. I enjoyed the updated pop version of the music and the updated dancing, as well. The overall flow of the movie though, at times, seems a bit stifled and choppy.

Morally, overall, the movie would not be considered too bad by the general public. The theme of love (Annie’s and Grace’s) being the driving force that changes Mr. Stacks from a greedy, self-adsorbed person into a generous, kind man is endearing. Also, I loved the message that older children in the foster care system are adoptable and desirable (I personally have two older adopted children).

There are a few sexual innuendos made mostly in regard to Miss Hannigan. There are two occasions of kissing. One kiss takes place on Miss Hannigan’s TV screen in the very beginning of the movie and at the very end Mr. Stacks and Grace kiss.

In one scene, there is deceitfulness displayed as a possible good act. A nice store owner asks Annie to change the expiration dates on some of the milk bottles so he can sell them longer.

The only act of violence (except for Miss Hannigan’s physical roughness with the girls) is one punch in the face given to Mr. Stacks’ campaign manager, Guy.

There is alcohol abuse by Miss Hannigan. There is one scene, where Grace, Mr. Stacks’ assistant is shown with a wine bottle and glass.

The word “h*ll” is used twice, as well as the word “d*mn” and “*ss”. The word suck is used once and son of a b*** is said without finishing the phrase.

The main moral issue I have with this movie is the language, especially the use of the Lord’s name in vain seven times, by various characters, throughout the movie. The film sadly reflects our society’s gross disregard for the name of God. We are told in the third commandment that: “Thou shalt not take the name of the Lord thy God in vain: for the Lord will not hold him guiltless that taketh his name in vain” (Exodus 20:7. God is our Creator and Savior, and His name deserves to be honored and respected.

Positive
Positive—I feel that this movie is a fun, family-friendly movie. I would suggest that you watch this movie on its own merits and not compare it to the previous “Annie” movies of the past. They put new songs in the movie and changed the storyline. The movie tells the story of an orphan (foster) girl, Annie, who is used by a powerful business tycoon, Mr. Stacks, to promote his mayoral campaign. He figures that having a foster (orphan) child in his home will win him votes. What he does not count on is that the girl wins his heart, and he loves this child as his own.

It is a very cute and girly film, in my opinion. I wish that they did not have some curse words in it like d*** and h***. It seems as if the modern era allows for cursing in films that you cannot avoid them.

I personally find the movie enjoyable. Some people may not like that Miss Hanagan is a drunk, but the previous Annie movies had her that way also, but there are no consequences for her drunkenness in this modern version. I would really take a light view of the movie and not look too deep into this one. It is just to entertain, and I think that it worked. There is nothing vulgar or rude. So, take the children to have fun and laugh!!
My Ratings: Moral rating: Better than Average / Moviemaking quality: 4

Karen, age 48 (USA)
Positive—This remake of the original “Annie” had a very refreshing redeeming message of love and family being more important than materialism. There was also some little message in there about the importance of reading, which inspired my 6 year old daughter.

I will warn old “Annie” lovers, though, that though the new story is much more glorifying to God, the music is a little annoying—every hip hop beat is too medium slow. So the musical excitement you may be anticipating is not omnipresent, so to speak.

But again, my review is super positive in an age when redeeming films with pure messages are hard to find. Great film for a Christian family like ours! As a wife of a pastor, I approved. (Can’t recall if there was anything off—language wise-so forgive me if I missed anything, but recall all things wonderful.) …
My Ratings: Moral rating: Good / Moviemaking quality: 4

Michelle Gold, age 39 (Israel)
Comments from young people
Positive—I enjoyed it. It was lovely. I liked the songs, especially you’re never fully dressed without a smile. It was family-friendly. It had s good storyline. I liked how it had the main theme of kindness and love. I would recommend it. Do not compare it to the first “Annie,” because it has its own merits. It is a good musical movie. I loved it.
My Ratings: Moral rating: Better than Average / Moviemaking quality: 4½

Lorrayya, age 14 (USA)
Comments from non-viewers
Negative—I really wanted to see this movie, but I find it hard to stomach how a movie with profanity could be seen in any way as family friendly. I will not be watching this movie.