for some disturbing images and smoking. 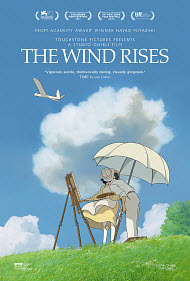 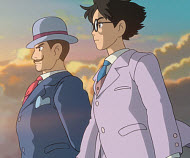 winds in the Bible

earthquakes in the Bible

“The wind is rising! We must try to live.” —Valéry

Feeling more like an independently produced art film rather than the animated movie of a giant filmmaking firm, “The Wind Rises” whisked me away into its lush, introspected world that seamlessly mixes fantasy and reality. If you don’t like slow-moving character studies and lingering camera shots on breath-taking scenery, I’d recommend skipping this one.

Though it may be little bit self-indulgent, who can blame the filmmakers for wanting to show off their truly lifelike drawings of grass, clouds, and the rolling countryside of Japan? It is definitely a fitting tribute and last film of revered animator, director, and writer Hayao Miyazaki before his retirement. I couldn’t agree more with David Ehrlich of Film.com when he wrote, “Hayao Miyazaki is the greatest animator the cinema has ever known, and he leaves us with perhaps the greatest animated film the cinema has ever seen.”

The English-dubbed version of the film boasts many big names you may recognize. Joseph Gordon-Levitt portrays the main character Jirô Horikoshi, Martin Short is his bellowing but lovable boss Kurokawa, Emily Blunt is Nahoko Satomi, the love of Jiro’s life, and Stanley Tucci is Italian aircraft designer, Caproni, who is Jirô’s inspiration throughout the story.

Loosely based on the life of Jirô Horikoshi, the film follows his childhood longings to become an airplane engineer and his rise to becoming one of the most respected airplane designers of all time. Exploring the idea of art versus artist, the film clearly depicts Jirô as being against Japan joining World War II, even as his planes become the most popular and successful Mitsubishi fighter planes utilized in the war.

Dabbling in magical realism during Jirô’s dream sequences, the movie soars to the heights of the human imagination and sinks down to the depths of loss, depicting many historical events—the Great Kanto Earthquake of 1923, the Great Depression, Japan going to war, and the plague of tuberculosis.

There is mild violence due to the earthquake and some war sequences and the sounds of bombs and gunfire are converted to “oooohs” and “aaahhhs” of a chorus, illustrating the human element to war that is often glossed over. Being based in the time periods that it is, the main characters are constantly smoking cigarettes. There are about four uses of the word “d**m,” and there is minor sexuality—characters are seen sharing a bed after marriage—with marriage itself portrayed in a positive and beautiful light.

One element that I deeply appreciate about Studio Ghibli films, as contrasted to the general rule in American animation, is that the adults—and especially men—are not close-minded, clueless, bumblers dedicated to squelching the hopes and dreams of their children. Instead most key adults are painted as being strong, kind, self-sacrificing, and noble people who are hardworking and dedicated to keeping their promises. That alone is worth my whole-hearted recommendation to adults and to older children and teens that are able to tolerate the deeper tragedy and sadness present in this sweeping drama.

Positive
Positive—This is a movie that will be enjoyed by the legion of Miyazaki animation fans, as well as engineers and history buffs. A fictional biography of Jiro Horikoshi, the designer of the Mitsubishi Zero fighter aircraft, it presents an accurate and seldom seen view of the devastating 1923 earthquake, plus German-Japanese relations prior to the war.

The hand-drawn animation is rougher than Disney’s early work, and the backgrounds are sparsely drawn, without the aid of CGI, but you are presented with a continual procession of charming and enduring images that will win you over. The story contains nothing rude or profane, and the violence is mild and historically accurate.

Young children will be bored be the slow pace of the movie; but there is a classic, though fictional, romance as well as the excitement of seeing history come to life.
My Ratings: Moral rating: Good / Moviemaking quality: 3