It Follows also known as “Corrente do Mal”

for disturbing violent and sexual content including graphic nudity, and language. 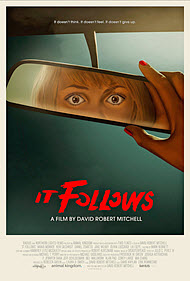 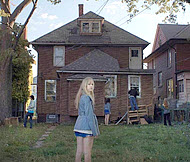 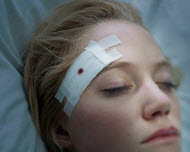 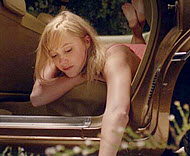 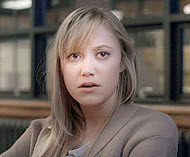 It’s a common fear to feel as though we are being watched or being followed. “It Follows” takes hold of this fear and brings it to life in a cinema screen nightmare not soon forgotten.

The story is about Jay, a late-teens girl living in a quiet suburb of Detroit. She dates Hugh, who seems a nice, average guy, until he chloroforms her one night after they have sex in his car.

PURITY—Why should I save sex for marriage?

Jay awakes tied to a wheelchair in an abandoned parking garage. Hugh tells her that he has passed “it” on to her, and it will never stop coming for her until she passes it to someone else. Hugh shows her an eerie woman in the distance walking slowly towards them. From then on, Jay begins to see strange figures of people walking slowly towards her that no one else seems to see. With the help of her sister and two friends, Jay must find a way to eliminate the curse before she becomes the next victim.

“It Follows” may sound like the numerous teen-cursed horror films that are out today, but it is surprisingly original and definitely memorable. To start, the filming and cinematography are amazing. Many of the scenes are shot as a throwback to 1970s and 80s horror films, including the synthesized, creepy music. The scenery is eerie and beautiful, at the same time. The film is generally quiet; there is little dialog and only two loud “jump” scenes. The film relies on suspense and viewer anxiety, rather than cheap scares and gore.

This film also leaves you with many underlying themes to think about—which is also a rare horror film quality. From a Christian viewpoint, we would view Jay as promiscuous; she has casual sex with her boyfriend and refers to previous times with other guys. The “it” that follows Jay is passed on through sex. While possibly not the filmmaker’s intent, this movie serves as a warning against casual sex. Jay also must consider sleeping around with others to pass the curse on. The “it” can be viewed as a stigma that follows those who are casual with sex and are tainted by their promiscuous lifestyle.

Jay and her friends also lack parental supervision and involvement. In fact, Jay’s mother is heard but never seen. Jay has no one to turn to but her friends, who are almost as clueless as she is about how to deal with the situation.

Thankfully, we have someone in life that we can turn to when we are lacking in advice or feel we have sins that we can never get past. Jay tries to find love and affection in casual flings to replace what she is lacking at home. I think many teenagers today probably feel the same way. They are looking for love in all the wrong places. Isaiah 55:6-7 states:

“Seek the LORD while he may be found;
call on him while he is near.
Let the wicked forsake their ways
and the unrighteous their thoughts.
Let them turn to the LORD, and he will have mercy on them,
and to our God, for he will freely pardon.” (NIV)

The “it” that follows Jay in this film can be seen as many things. As a Christian, I chose to see it as a representation of the sin we have not yet given to God because we feel we deserve it. We sometimes chose to live in fear of what is following behind us, instead of giving it over to the Lord.

The high anxiety of the film also made me think about the worries we carry unduly, too. Jay succumbs to the fear of waiting on the “it” to come for her and spends most of her time locked away in her room. How many times do we do this in reality? We lock ourselves up in our worries and fears instead of giving them to God.

These are two of my favorite verses when it comes to dealing with worry:

“Do not be anxious about anything, but in every situation, by prayer and petition, with thanksgiving, present your requests to God.” —Philippians 4:6 (NIV)

We often find the constant worry we have does more damage than the thing we are worrying about. Jay cannot move past her fears until her friends convince her that inaction is not going to do anything but prolong her fear. It’s a good thing we have a Savior and friend in Jesus who can lead us out of worry and fear and onto a path of living for Him.

There are several brief sex scenes in the film, but no nudity is shown during them. However, there are several instances of girls in bathing suits or underwear. One scene involves teenagers finding a nude magazine and some of the pictures are shown with graphic nudity. Three scenes of graphic nudity (but not sexual) are shown with two of them being full frontal from a distance (one man and one woman).

Final Take: I cannot recommend this film due to the heavy sexual content. However, as a horror film buff, I thoroughly enjoyed this film because of its use of suspense rather than gore and the intriguing story and moviemaking quality. I think this film will easily make it onto the best horror films of the year list and become a cult classic in the future.

Neutral
Neutral—“It Follows” is one unsettling film—about sex turned into mind-bending creepiness throughout. It’s the smartest horror film since “The Cabin in the Woods” and “Scream,” and the smartest one until it’s tie with “Get Out,” which is quite a positive film. “It Follows” warns us about sin: If you do the crime, you’ll do the time. And it will follow you… Madly.

I watched “It Follows” through VidAngel, in which I had my Netflix account connected to VidAngel. So I didn’t see all or most sexual scences, maybe just little things, and there was other stuff that was taken out, too. I can only recommend the film if you watch it on VidAngel connected to Netflix, or however you can watch it through VidAngel as of right now. (Look into VidAngel more to understand their latest updates.)
My Ratings: Moral rating: Average / Moviemaking quality: 5

Stephen Jacewicz, age 21 (USA)
Negative
Negative—This film was very long and boring. Seemed to me like some college kids made it for a film class!?!? Poor acting, wasn’t scary. Low budget, I think they were trying to get the same look and feel of John Carpenter’s first “Halloween” movie. Wrong era and people have been so desensitized, that the scares just don’t cut it any more. Not for Christians, don’t waste your time or money.
My Ratings: Moral rating: Very Offensive / Moviemaking quality: 2

Tony, age 56 (USA)
Negative—I watched “It Follows” because I was under the impression that it would have thought-provoking messages about the dangers of premarital sex. Instead, it wasn’t so much about premarital sex as sex in general. There are two problems with this film.

One, the way it exploits sex as a medium for horror. The way it blends sex with evil spirits creates a very disturbing overtone throughout, even though the violence is mild for its R-rating. We should fear premarital sex, because it is a sin against God, but we should not fear sex, in general, because a horror film sexualizes fear.

The second problem is that its worldview views one-night stands as the norm for sex.

Okay, actually there are three problems with this film. The two I mentioned have to do with the worldview, and the third one has to do with content. The nudity in this film is through the roof. There is male and female full frontal nudity. These are shown from a distance, but there are also several instances of clearly visible bare breasts—it’s how the evil spirit frequently appears. There are also a few scenes of very graphic sex without nudity.

All in all, while I was impressed with the quality of this film, I kept asking myself if I should even finish watching it. I was waiting to see if it would redeem itself, but, honestly, I just probably shouldn’t have. Even if it had, I couldn’t recommend it. And it didn’t. There is no redemption or worthwhile material here.
My Ratings: Moral rating: Extremely Offensive / Moviemaking quality: 4
—Gabriel Mohler, age 27 (USA)

Movie Critics
…in essence, the most lethal venereal disease ever. If only Jay had held on to that promise ring. …“It Follows” is really just “The Ring” with sex. Lots and lots of sex. …

Screen It!
…Canny manipulation of tone, atmosphere and tension makes this a satisfying little horror movie. …the tension remains ratcheted up to a steady thrum, punctuated by jump scares and bursts of intense action. …

David Rooney, The Hollywood Reporter
…Rather than breaking new ground, “It Follows” recycles familiar teenage horror tropes — a girl alone in a house, evil forces banging on a door — but its mood is dreamy. Seldom do you feel manipulated by exploitative formulas. The violence, when it comes, is sudden, and the camera doesn’t linger over the gore. …

Stephen Holden, The new York Times
…Scares that work… “It Follows” takes the sexual anxieties of a generation—AIDS and HIV, obviously, but also issues of power, exploitation and shame—and transforms them into a creepy bogeyman.

Rafer Guzmán, Long Island Newsday
…The matters of sex and lost innocence work like a thematic undertow, pulling the characters down into the dark, psychological depths. [3½/4]

Steven Rea, Philadelphia Inquirer
…“It Follows” is a smart, disturbing and haunting tale that is truly, deeply scary. … create a paranoia in the viewer where there are concerns [about] the simple action of someone walking down the street can be part of the terror, then the movie has buried itself in the psyche and is creating a nightmarish response. …[3/4]