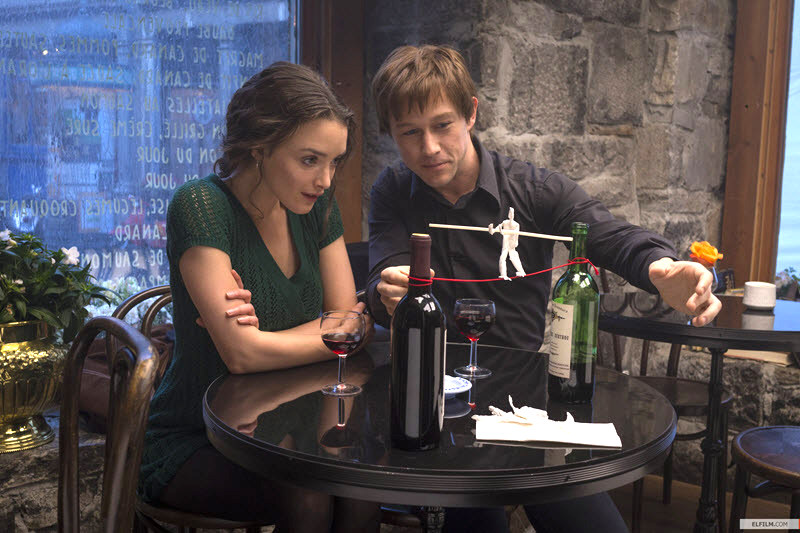 for thematic elements involving perilous situations, and for some nudity, language, brief drug references and smoking. 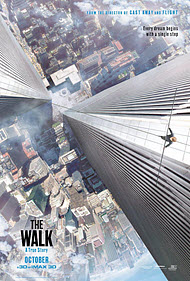 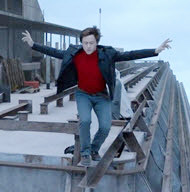 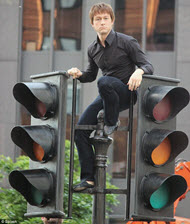 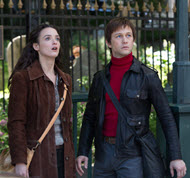 What does the Bible say about faith?

Who is Philippe Petit?

“Every dream begins with a single step”

“The Walk” is based on the true story of a young French high wire walker who made his dream of crossing between the rooftops of the North and South buildings of New York’s World Trade Center (in 1974), at the time, the world’s tallest buildings, a reality. But this film is so much more than just that event alone.

The story of Philippe Petit (Joseph Gordon-Levitt) begins when, at age eight, he sneaks into a circus and becomes immediately captivated by the high wire act. He decides to teach himself how to walk the rope, and it is years later in Paris that Philippe, now a street performer, reads about the construction of the World Trade Center buildings, and his dream is given wings. While in Paris, he meets a musician named Annie (Charlotte Le Bon), a fellow artist with whom he can share both his heart and his vision. Soon, he makes the acquaintance of others who will join him in his grand and audacious endeavor, code named “le coup.”

Director Robert Zemeckis’ (“Back to the Future,” “Forrest Gump) “labor of love” that is “The Walk” is evident from the beginning of the film, in both the impeccable cinematography showcasing France and the heart of Philippe “the dreamer.” Philippe’s enthusiasm is infectious and draws in not only the people that will be needed to make this happen, but the audience, as well, and does a good job in reminding film goers why we enjoy going to the movies.

Violence: Minor. Philippe is arrested, hand cuffed and thrown down in one instance, because all of his grandest wire walks were done illegally. Philippe zealously guards his sidewalk drawn “circle of performance” with comic violence, as he runs over people’s feet with his unicycle. Philippe imagines one of his friends falling to his death. But other than that, it is more the sense of peril that accompanies his death defying feats that takes center stage, rather than mock or imagined violence.

Sex/Nudity: Moderate. Philippe and Annie kiss, but nothing more is ever shown. Philippe is seen getting up from bed, Annie asleep next to him, and it is implied he is undressed. On the roof, Philippe goes into a panic searching for an almost invisible fishing line, so he strips naked and runs around in a frenzy trying to feel it. His full bare backside and profile is shown several times during this scene that, given the darkness of night, could have been easily obscured.

A few words about alcohol and drugs are featured in the film. When Philippe first dines with Annie, they drink wine (inconsequential in French culture), and one of the Americans who helps is in a constant drug induced state of mind, though he is never shown taking drugs.

The film chronicles the events leading up to Philippe Petit’s famous walk, but, in following his journey over those few years, we get to see how he handles the lessons that come in every life.

Faith: Although it is placed on a man and not our Creator, Annie never falters in her belief of Philippe’s ability. Later, when arriving at the Towers for the first time, he exclaims, “No one in his right mind would do this. It’s impossible, but I’ll do it.” These two examples are focused on what ‘man’ can do, but, as God’s children, we know how much more can be achieved in His name, if we only believe.

“Faith is the confidence that what we hope for will actually happen; it gives us assurance about things we cannot see.” —Hebrews 11:1

To His disciples, Jesus said, “Truly I tell you, if you have faith as small as a mustard seed, you can say to this mountain, ‘Move from here to there,’ and it will move. Nothing will be impossible for you.” —Matthew 17:20

Thankfulness: Philippe has an epiphany and all at once feels something he admits he’s never felt before: thankful. Sadly, while he is thankful for the wire, the towers and the city, he makes no mention of God. His newfound appreciation of life is moving, but it falls short. Yes, we are called to give thanks, but we should do so in a very specific direction—heavenwards.

“… in everything give thanks; for this is the will of God in Christ Jesus for you.” —1 Thessalonians 5:18

Focus: When Philippe begins his walk, the city, the buildings and even the crowds all disappear, and there are no longer any distractions to keep him from walking the wire. He is at peace, showing an incredible expression of focus, making this certainly one of the most mesmerizing and touching scenes of the movie. The Word of God also calls us to greatness, but it is not a type of greatness the world will recognize or look up to.

“Do you not know that those who run in a race all run, but one receives the prize? Run in such a way that you may obtain it. And everyone who competes for the prize is temperate in all things. Now they do it to obtain a perishable crown, but we for an imperishable crown.” —1 Corinthians 9:24

The score, as composed by Alan Silvestri, is a perfect accompaniment to the film and solidifies another winning collaboration with director Robert Zemeckis. Joseph Gordon-Levitt turns in a fine performance as the mischievous, unconventional but charming clown Philippe, and Ben Kingsley depicts the role of his mentor, Papa Rudy, with what, I can only hazard a guess, can be described as Parisian gusto.

“The Walk” is essentially a caper movie, about an illegal but innocent crime told in a fascinating and, at times, breathtaking fashion, especially during the final act when the audience can imagine taking those steps along with Philippe, and, for this reason alone, it is best seen in IMAX 3D, as was intended. Some very unnecessary content (brief nudity, sporadic cursing, and the Lord’s name taken in vain) diminishes an otherwise amazing and very uplifting film.

Positive
Positive—I did enjoy “The Walk.” It was a very well made movie, and the scenes at the top of the tower and the high wire were incredible. It felt like you were actually in the air with Philippe. The story is incredible and still hard to believe he actually did what he did.

God created man with such ability to accomplish whatever one can dream. I am glad it had a happy ending, since there were moments I was at the edge of my seat. If you like dramas/true stories, I would recommend this one.
My Ratings: Moral rating: Good / Moviemaking quality: 5

Gloria, age 50 (USA)
Neutral
Neutral—My twelve year old son and I enjoyed this film. It was entertaining, compelling and clean. As the incredible story unfolded, however, we began to wonder whether the real Phillipe Petit was as benign as the film made him out to be. Sadly, a little research confirmed our suspicions. The real Phillipe is no hero. He was a narcissist who lusted after his own glory. While what he accomplished may have been incredible, it was foolish, dangerous and ultimately for nought. How disappointing. One of the few good, clean movies of the year, and it celebrates a man who is the exact antithesis of Christ.
My Ratings: Moral rating: Offensive / Moviemaking quality: 4

Lara, age 43 (USA)
Comments from non-viewers
Negative—Nope, I’ve not seen the movie and HAVE NO INTENTION TO ~ thanks to the profanity content listed. All that horrible language and still garners a PG rating… ??!! Ludicrous! Must we keep depending on the Kendrick brothers to be the only ones to produce CLEAN movies?? Why doesn’t anyone else get it? We were simply looking for a wholesome activity and wondered (hoped) with this playing at IMAX and being PG, this might be it. Obviously it’s not.

As I’ve said before, any movie with even “one” instance of taking God’s holy name in vain is once too many for me and I believe should not be viewed by any real Christian. Just remember everything we put into our minds, hearts, ears and eyes stays there. May the words of my mouth and the meditation of my heart be pleasing to you, O LORD,… Psalm 19:14 / I will not look with approval on anything that is vile. I hate what faithless people do; I will have no part in it. Psalm 101:3 (NIV)
My Ratings: Moral rating: Very Offensive / Moviemaking quality: