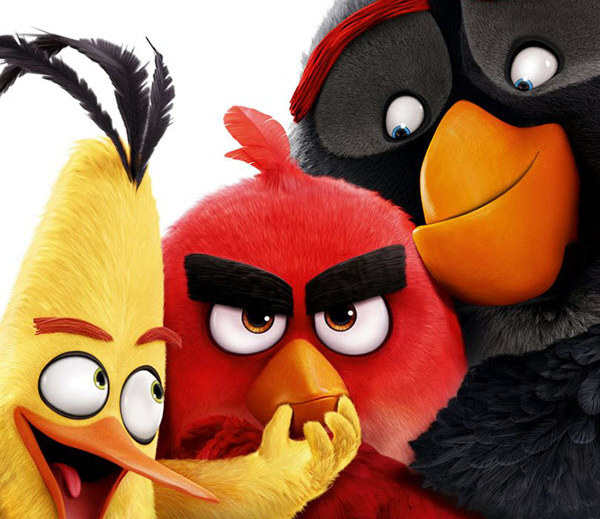 for rude humor and action. 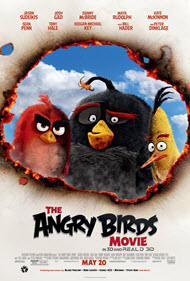 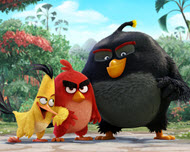 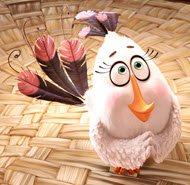 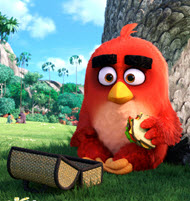 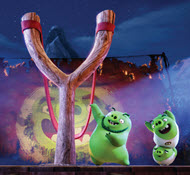 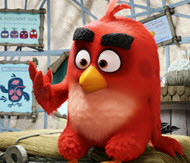 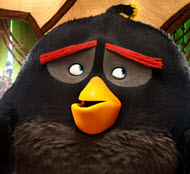 “The Angry Birds Movie,” based on the smartphone game “Angry Birds,” is about a community of birds that is troubled by a few with anger issues. The community’s leader requires several outburst-prone birds to attend anger management therapy. However, the therapy’s combination of meditation, art, and poetry seems to have little calming effect on the angry birds, and sessions often end in arguing and yelling.

Business as usual on the birds’ island is interrupted when a ship full of pigs arrives. The pigs act friendly at first and entertain the birds with music and dancing. However, Mr. Red, one of the birds in the anger management classes, notices that the pigs are showing little respect for island property, and that far more pigs are being brought onto the island than the pigs’ leaders claimed. However, most of the other birds reject his concerns, believing that the right thing to do is to make the pigs feel welcome, and that Mr. Red is just being his usual angry self. Mr. Red teams up with other birds in his anger management class to try to save the island, but are the pigs really a major threat? And what would have to happen for Mr. Red and his team to get support from the other birds?

The movie has a lot of humor, which comes largely from wacky situations involving angry birds. The outbursts of anger are comical, and I did not think they were “painful” to watch. However, there are many incidents which would not be funny if imitated in real life. Those issues, combined with some innuendo and comic violence, make the movie’s suitability for kids questionable.

The overarching message of the movie is about times when a type of anger is necessary to have the drive to respond when others are being harmed, as opposed to losing your temper out of needless frustration. The movie also alludes to how excessive tolerance can compromise safety. The Bible also references the proper application of anger in Ephesians 4:26-27 (NRSV),

“Be angry but do not sin; do not let the sun go down on your anger, and do not make room for the devil.”

This movie has themes that could be applied in a lot of different contexts, and it is entertaining to watch. However, there are also some notable content concerns, so I advise caution for family viewing.

Violence: Intense comic violence lasts about fifteen to twenty minutes near the end of the movie. Scenes include birds catapulting into buildings (they survive), bombings, aircraft chases, massive fires, and trappings. There are also some slapstick antics throughout, such as characters getting mad and throwing things at each other.

Sexuality: In several scenes, characters shake their posterior at the audience while dancing. Birds, who consider themselves “clothed” by their feathers, admire the “naked” pigs’ bodies on one occasion. An eagle uses binoculars to look at female birds bathing. There is a joke about female birds “getting busy” in order to lay eggs. A sculpture is shown that is not really clear, but may be showing several birds together in a sexually suggestive manner. A bird mentions getting his “giblets” hit. A female bird wears toilet plungers in a way suggestive of a bra.

Substance Use: A bird buys a drink at a bar-like setting. There is also a reference to “hard partying” and a comment that sounds like “red rum.”

Other: There are repeated verbal insults, stealing on a couple occasions (portrayed negatively), and a bird paints a picture of a pig getting burned (not graphic though). There are a few occasions of lying. An angry bird sees a long line of baby birds and recommends “bird control,” which seems to be a reference to birth control. There are also a few flatulence instances and one urination scene. A character puts an object in his mouth that looks like a cigarette. An eagle claims to “see all and know all.” A bird makes a joke about “cardinal sin.” A bird makes a painting that seems to portray God as a bird. There is an apparent reference to the theory of Evolution, as a bird mentions evolving from dinosaurs. Zen is mentioned as part of the anger management course. A “co-exist” sign is shown once.

Positive
Positive—I thought the movie had Christian references. The eagle seems to represent God’s view, when he may not come when you want him, but he is right on time. Wait on the Lord, and do not faint. Be angry and sin not. Having done all therefore stand. God will fight your battles for you. Very timely reminder to Be Still and Know that I am God.
My Ratings: Moral rating: Good / Moviemaking quality: 5

Dina, age 61 (USA)
Neutral
Neutral—More relevant if released a few years ago, the Finnish app editor Rovio jumps on the success of the most downloaded app game of all time with an Angry Birds movie. Surprisingly, for a video game with a 1-line plot, they have actually managed to make a full feature movie with a decent story, packed with every single detail from the app. The animation is of great quality, as is the voice acting (thumbs up for Sean Penn) and has a fast-paced action and contains many (bird) puns.

The more or less discreet innuendos will definitely get over kids heads. However, the happy bird community and its mythical mighty eagle seem to be parodying the “good” Christians community, bullying and casting out the only sensible though sarcastic main character, and who later teaches them to embrace their emotions/anger to get their eggs back! Sure, friendship, courage, taking responsibility and leadership are some values highlighted in this movies, but so is greed, deception, revenge and destruction. Not the best way to treat your neighbours: entertaining but not really educational.
My Ratings: Moral rating: Offensive / Moviemaking quality: 4

Nicolas, age 28 (United Kingdom)
Negative
Negative—The birds taught the younger birds to look for a greater bird that would be coming to save them, this was made fun of several times, saying that it’s just something mothers teach their kids. When they find this greater being, bird, he’s a disgusting narcissist. They also mention Evolution like it’s just something ordinary.
My Ratings: Moral rating: Extremely Offensive / Moviemaking quality: 4

Sheila, age 43 (USA)
Negative—Correct me if I’m wrong, but was there a point in the movie when a girl bird is sitting with two other girl birds, and one seems to be flirting with Red. She is actually flirting with a male bird above Red. The other boy bird ends up jumping down to meet up with the flirting girl amongst her two friends. The flirting girl and other male bird hold hands and walk off together, and the other two girl bird friends then hold hands and walk off as two couples. One couple is male and female, and the other is two females. Subtle, but noticeable. (Sexual Immorality)

And the statue, as mentioned, is depicting a bird orgy if I’m not mistaken. (More Sexual Immorality) Also, noticed another point in which Terrance is driving a van through the pig town in which the ask too familiar “COEXIST” bumper sticker is predominantly displayed. Again, subtle, but right out on the open. (Ecumenicalism) Tough for me to recommend it to any other Christian families that may be thinking about going. Lastly, it was hard to tell if all the bird couples were a man and woman or if they were some other type of couple.
My Ratings: Moral rating: Very Offensive / Moviemaking quality: 2½

C Wise, age 50 (USA)
Response from reader—I haven’t actually seen this movie but I just want to add my voice to “C Wise, Age 50.” I am EXTREMELY concerned why the critics didn’t pick up on these issues. Hollywood is constantly trying to shove their political agendas down our throats, and I have NO doubt this is the case with this movie. THANK YOU C Wise for being aware of these subtle yet completely destructive messages and bringing them to the light! Beware Christians.

Becky, age 48 (USA)
Negative—The yellow bird is obviously homosexual, as evidenced by several comments and even a dream sequence involving Mighty Eagle. This movie is NOT suitable for Christian children, in my opinion.
My Ratings: Moral rating: Extremely Offensive / Moviemaking quality: 3