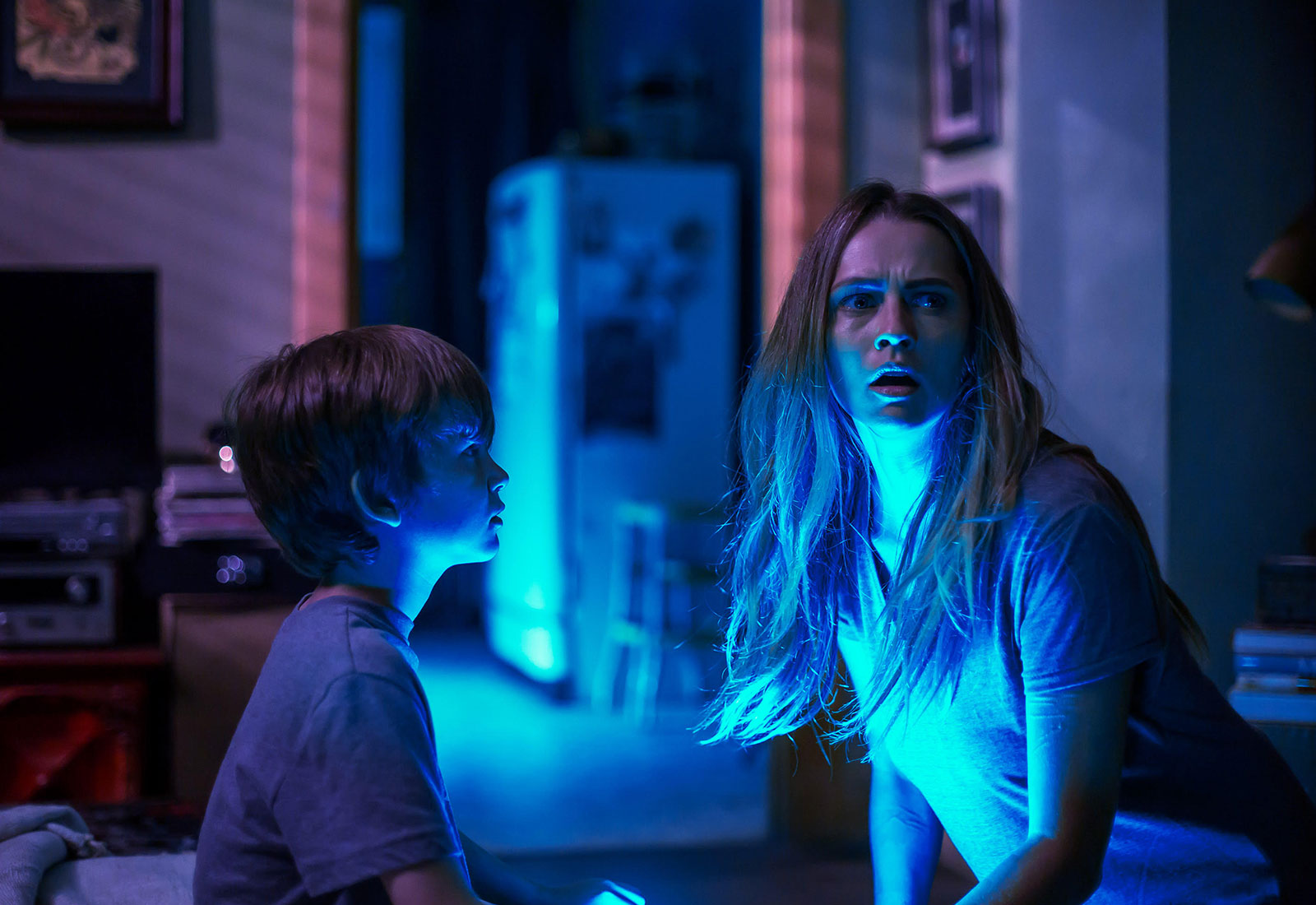 for terror throughout, violence including disturbing images, some thematic material and brief drug content. 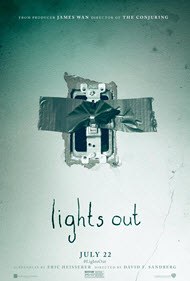 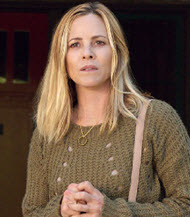 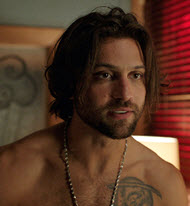 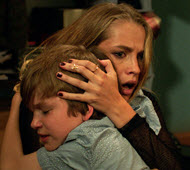 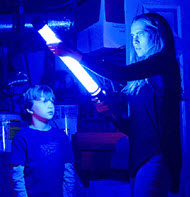 wanting to do evil things

A parent walking out on his/her family, always takes a toll on their loved ones. This is certainly the case with Sophie when her husband walked out on their family. As a result, Sophie went into a severe state of depression, which, in part, caused her to imagine her deceased friend, Diana, as being alive and in the room with her. Her son, Martin, lives with his mom and knows about his mother’s strange conversations, behind the door and in complete darkness, with Diana and actually sees Diana’s figure one night.

Flash-forward to the next morning. Martin is in the Nurse’s office at school. When the social worker is unable to get a hold of his mother, the social worker calls Martin’s sister, Rebecca. She informs Rebecca that he has fallen asleep in homeroom for the third time in over a week and that she will be looking into what is going on, especially since Martin’s dad (Rebecca’s stepfather) recently passed away.

Rebecca confronts Sophie about what’s going on and is well aware of Sophie’s mysterious conversations with Diana. Rebecca doesn’t feel her mother can take care of Martin, and Rebecca decides it’s her job to protect him from Diana… whenever the lights… go… out.

Every screenwriter, director or producer in Hollywood has their own personal touch they add to a film. This “touch” may be rather in-your-face, but also familiar and satisfying, leaving audience members in awe. Film critics say, “Yup, that movie had such and such’s name all over it!”

Certainly, even if you hadn’t known this beforehand, for example, you would have, after reaching the half way point in this film, noticed producer James Wan’s touch behind this film. As another reviewer pointed out, the film “uses the same scare tactic throughout, but it never feels old.” And that, my friends, is James Wan’s personal touch, especially with “Lights Out.” Diana is a frightening figure, and her appearance (how long, how often, and in what ways) remains the same (with some variances on how long), but how James Wan uses the scare—and when—always changes, in a way that produces genuine jumps in viewers.

“Lights Out” is David Sandberg’s debut as a horror film director. I must say, I have never been more impressed with a newcomer than I am with Sandberg. What helped produce the impressive nature of this particular horror film is that Sandberg also wrote the original short film that this is based on. So, he understood his characters, the situation, and the vision better than anyone else could, even James Wan. As such, he was able to bring out the best this film could offer, using mainly natural light and a minimum amount of CGI (often NOT the case with today’s horror films). Sometimes in film, “less is more,” and this is the case for “Lights Out.” For these decisions, I applaud him.

From a cinematic perspective (ONLY), this film has a lot going for it. However, there is a sizeable amount of objectionable content to deal with, particularly violence and spirituality.

Violence: The violence is this film is heavy, but rarely graphic (with some exceptions). At the beginning, a character is killed (neck snapped). Later, we see that same character’s body on a floor, covered in blood and with its body distorted. Throughout the film, characters are attacked. This includes, but is not limited to a scene where a woman is thrown against the floor, a scene where someone tries to hang a woman by her neck, and another scene where two people are killed (with one, the audience sees the person’s dead corpse—eyes and mouth missing, standing before it falls over). A character also commits suicide (on screen). Also, toward the end, we see Diana’s distorted figure up close, and see lesions on her skin burn.

Sex/Nudity: Moderate. At the beginning of a scene, Rebecca and her “friend,” to use the term loosely, are implied to have just finished having slept together. Rebecca appears in revealing lingerie, as well in a towel, as she steps out of the shower. In a couple other scenes, naked wax mannequins (some female) are shown. There are also moments of sexual innuendo, including one comment made about Rebecca cleaning “the bottom drawer” for Bret (I might have misinterpreted this though). Rebecca and Bret share a passionate kiss.

The entire premise of “Lights Out” deals with the ever present fight between light and darkness. In times like these, such as the mass shooting in Dallas and the recent terrorist attacks, it is easy to fixate ourselves on the darkness that exists. Indeed, darkness and evil are ever present in the world, but also within our hearts. It is the cost of sin, sin which Adam and Eve brought upon humanity that we were never meant to experience.

But where there is darkness, there is Light. For indeed:

And who is this light? Jesus!

The people walking in darkness have seen a great light; on those living in the land of deep darkness a light has dawned (Isaiah 9:2).

“…Jesus spoke to them, saying, ‘I am the light of the world. Whoever follows me will not walk in darkness, but will have the light of life’.” (John 8:12)

So friends, while we see darkness in the world, we must truly be fixed on the true light of the world, Jesus. We must remember that our suffering, our pain, our trials are temporary, as Jesus has promised to return and establish his kingdom on Earth, where there will be no more sin, no hate, no pain. As the Lord himself has stated:

“He who was seated on the throne said, “I am making everything new!” Then he said, “Write this down, for these words are trustworthy and true.” (Revelation 21:5)

As my sister and I walked out of the theater this evening, over and over again I kept saying to her, “This is one MESSED UP movie.” Whether this is good or bad, I’m undecided. Let’s face it, there’s plenty to be afraid of in this movie, apart from the violence, profanity and sexual content. A movie that takes the concept of someone’s mental instability manifesting itself as a spiritual entity (in this case Sophie’s deceased friend, Diana) is itself a psychologically, and perhaps morally, messed up movie, which can be dangerous for viewers to come to terms with or indulge in.

“Lights Out” is a film that presents darkness as a presence, yes, but the light is always stronger. Is viewing “Lights Out” the best way to receive this message? No. As such, while the filmmaking quality is excellent for this genre, as it stands, I can’t recommend it to a Christian audience. If you do intend on seeing this film, I suspect that many will need to sleep with the light on for a while… I know I might.

Negative
Negative—I just got around to seeing this. I wish I had just forgotten about it. The trailers made it look like a good little horror popcorn flick, and… well, I guess it kind of was? I didn’t really feel like it was anything special. There was nothing bad about the quality, but nothing all that impressive either. Just kind of… mediocre.

Furthermore, it treads in very iffy waters with the whole mental illness thing. I was not bothered by the ***SPOILER*** mother killing herself at the end, even though it was technically a suicide, because she was sacrificing herself to save her children. ***END SPOILER*** But the film muddles the line between fantasy and mental illness, which could be very triggering to anyone who knows someone with a mental illness. I’d say the creators of this film used poor judgment and are lucky it’s not under attack by easily triggered viewers.

I didn’t hate this film or anything, but I wouldn’t recommend it.
My Ratings: Moral rating: Offensive / Moviemaking quality: 3

Michael Phillips, Chicago Tribune
…Refreshing horror flick “Lights Out” has more to it than jump-scares… [3/4]

Brad Wheeler, The Globe and Mail
…an impressive feature debut… [3½/4]

Lou Lumenick, New York Post
…Very obviously a first feature, “Lights Out” is full of camp (most of it clearly intentional, some perhaps not), and its underlying mythology is confused and often ridiculous. But there’s an invigorating leanness—and a giddy, almost innocent energy…

Andrew Barker, Variety
…accomplished, but not especially distinctive… relies as much on fraying emotional bonds as supernatural suspense to create tension…

Justin Lowe, The Hollywood Reporter
…makes the most of variations on a theme, by taking one good image and repeating it until it loses its thrill… [1½/4]