for some intense peril. 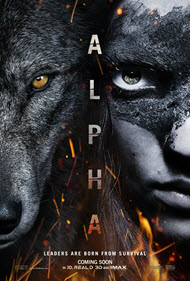 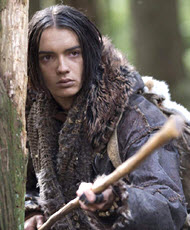 The term “PREHISTORIC” means before recorded history long before man; however the Bible is a record of history since time began, and the Bible says man was created on day six along with the land animals. (Genesis 1:24-31).

Evidence for a young Earth 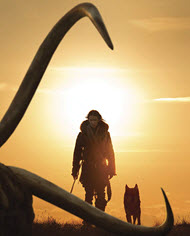 “Alpha” is a daring movie, in that it has the boldness to deviate from the norm. Few films today would dare to have the only dialog spoken in an unknown language with subtitles. Few movies would have what appears to be a sweet boy-and-his-dog story, but which also contains unflinching, gritty realism. Few would let so much of its drama depend upon simple survival with no scheming bad guys, no foul language, no lurid backstory, and not even a hint of sexuality. Few would hinge so much on a beautiful but brutal wilderness and the charming friendship of a boy and a wolf.

Yet “Alpha” does do all of this, and I found it to be a very refreshing change. However, some of these same decisions may unfortunately leave it with a narrow audience. A coming-of-age story featuring a boy and a wolf should attract young viewers, but the PG-13 rating for scenes of injuries and danger may frighten some parents away, as will the thought of reading subtitles to children. Animal lovers who are attracted by the appeal of the wolf may be upset by seeing the many hunting sequences. And those who are seeking the gory violence of a survival movie like “The Revenant” might be disappointed that “Alpha” is realistic, but not overly gratuitous in its violence. I fear that it is a movie which will appeal to only a small niche of viewers.

The story is straightforward. A tribe of Ice Age hunters embarks on a dangerous annual trek to kill “the great beasts” (steppe bison), accompanied for the first time by the chief’s son. Disaster strikes, and the young man must now survive a great journey to reunite with his family.

I love the survival movie genre, especially when it involves realistic depictions of nature and life in harsh conditions. Often I must pass on such films because they also include aspects which are not fitting for a Christian to view, but there was nothing truly objectionable in “Alpha” other than some harsh imagery of hunting and disturbing injuries. I was glad to be able to enjoy the simple adventure story and stunning scenes.

“Alpha” is a visually beautiful film with sweeping landscapes and skyscapes which must be breathtaking when viewed in IMAX. I don’t know if the scenes with the night sky were computer generated or if they were filmed in an area with no light pollution, but they were amazing. It grieves me to think of how little we actually see of God’s handiwork in the night sky due to ambient light. The Bible says in Psalm 19:1, “The heavens declare the glory of God; the skies proclaim the work of His hands.” Yet we’re missing so much of it!

The night sky figures heavily in “Alpha,” as the main character is guided by a constellation tattooed on his hand. Unfortunately, no credit is given to the Creator for the vast array of stars which are seen; rather these are considered to be the “lights of the ancestors.”

In contrast to the realism of the landscapes, some of the CGI renderings of animals are a little hazy and unrealistic. I applaud the filmmakers for attempting to portray beasts which are no longer living, even if the rendering isn’t flawless. One could tell that at least the moviemakers were trying to be accurate to their setting.

The time period is listed as “20,000 years ago” and the place is simply called “Europe.” To learn more about a Biblical view of the Ice Age, see the content in the sidebar and below. Please enter this movie with the understanding that the worldview presented in “Alpha” is one of an old earth. Refreshingly, the tribesmen are not portrayed as mere brutes or as grunting “cave men,” but are shown as intelligent people who merely live in a primitive culture.

Depicted in the film are the “mammoth steppes” in which giant herbivores like the woolly rhinoceros, the steppe bison and the woolly mammoth rule the grasslands. There are also fierce predators such as the sabre-toothed cat, wolves and hyenas in this vast biome. There is a constant threat of danger from these beasts, from accidents and from the unforgiving weather. It is a decidedly harsh environment and it seems that our characters go from one life-threatening encounter to another with barely a breath in between. This pushes the limits of believability, as I wondered how they could possibly continue to survive, and it also leads to some rather predictable moments and scenes.

The young son of the chief, Keda, is portrayed sensitively by Kodi Smit-McPhee. I have only seen this young Australian actor in one other film from years ago, “The Road.” In that movie, Smit-McPhee’s very young character is also struggling to survive in harsh and unthinkable circumstances. Similarly to “The Road,” so much of this film depends upon us liking Keda and hoping for his survival. I found Keda to be an appealing character, and empathized with his struggles and setbacks. This was contrasted by the pleasure I felt in seeing moments of joy and discovery in his relationship to the wolf he names Alpha.

Besides Keda, there are few characters with any real development or screen time. His mother is shown worrying about him, but we don’t learn much else about her, other than that she knows her son “leads with his heart, not his spear.” We briefly meet his father’s friend from another tribe who has recently lost his own son. Keda’s father, Tau, is well-portrayed by Johannes Hauker Johannesson. He gives a balanced performance between stoic leader and loving father. His agony over Keda’s accident is palpable. As he cries out for his son, I thought of the anguish God the Father must have felt when His only Son was put to death on the cross. And as Keda first realizes he has been separated from his father, I thought of Jesus calling out from the cross, “Why have You forsaken Me?” (Matthew 27:46).

The father and son relationship is central to the movie. Keda and Tau remind me of the characters Hiccup and his father Stoick the Vast in the animated movie “How to Train Your Dragon,” with both fathers having high hopes that their sons will be strong leaders. The sons, however, show signs which their fathers interpret as weakness until their true worth is shown. Actually, there are other parallels to that franchise, especially concerning the other main relationship in “Alpha,” which is the relationship between Keda and the wolf.

Some commenters mention that the CGI used to render the facial expressions of the wolf is seamless, but I am not sure that these expressions are CGI at all. Alpha is played by Chuck, a Czechoslavakian Wolf Dog. This a highly intelligent dog breed with a very wolf-like way of communicating using posture, facial expressions and small sounds such as whines and growls. I found Chuck as Alpha to be convincing as a wolf in appearance and mannerism. Using a dog breed which is so similar to a wolf, rather than using CGI to create Alpha was a smart move. It lent needed authenticity to the relationship between Keda and Alpha, which is good because we don’t really have much time to see each step of their relationship as it grows and progresses.

The movie claims that it is showing the first step in the domestication of the dog. But is it? We do know that all dogs today have common lineage to a wolf ancestor, which actually fits with the Biblical narrative of a canine “kind” on the Ark, an animal in which at Creation God placed a great deal of potential for genetic variation. Evolutionists sometimes point to the many dog breeds seen today as evidence of their theory, although it is quite clear that dog breeds were manufactured by intentional selective breeding by humans for desirable traits and did not arise from an unguided process. If anything, the variation in dog breeds points to a wise Creator who placed such possibility for variety within the canine type and who also placed within them a desire to be part of a specific social structure that makes them suited for human companionship.

From Wolf to Woof? Answer

What a Dog’s Nose Knows!

What’s in a Look?

Hairy New Findings in Dog Variation—A Different Coat Is as Simple as One, Two, Three

There is not much in this film which is truly objectionable for a Christian to view. There is no bad language, no sexuality, and only minor nudity. Keda removes his outer clothing on two occasions but has on a covering similar to underpants or a loincloth. Other men are briefly shown shirtless in a non-sexualized way.

The characters are tribesmen who have a false system of belief involving their ancestors. A creepy female shaman briefly leads the clansmen in rituals, one of which appears to involve blood. We see Keda receive a tattoo on his hand with a sharpened stick. Members of the tribe initiate the young hunters by beating them up (shown in background).

Worms, larva, insects, and raw meat are eaten in a few scenes. We see maggots being placed on a wound to cleanse it (details obscured). Several scenes involve animal hunts, including one in which animals plunge over a cliff. A frightened boar is shown in close up before the killing blow is struck. We see humans and animals struggling to survive through weather, hunger and fatigue. A character painfully resets a broken bone. Injuries to humans and to animals are shown, some of which include blood. There are several animal attacks. The movie earns its PG-13 rating for these scenes of peril, and parents should know they are sometimes sudden, as well as realistic, and may be hard to watch for sensitive viewers. My 12 year old daughter chose to avert her eyes during several of these scenes, but otherwise enjoyed the film very much.

I also enjoyed “Alpha.” It’s not a perfect film, but it is a good effort with a moving story and scenes of great beauty. Its relative lack of objectionable moral content ranks it higher in my view. However, a line from the movie keeps replaying in my head. When Keda refuses to kill a wounded animal, his father admonishes him by saying, “Life is for the strong. It is earned, not given.” I am so glad that we do not have to rely on mere human strength to have eternal life! Nor could we ever earn life in heaven with God. Life for us is given… it was given when Jesus died on that cross in our place. Romans 6:23 says,

“For the wages of sin is death, but the free gift of God is eternal life in Christ Jesus our Lord.”

If you have never accepted this gift, click here to learn how. If you have, then be sure to say, as Paul wrote in 2 Corinthians 9:15, “Thanks be to God for His indescribable gift!”

Positive—It’s not for children under 10, because of subtitles and sudden peril. I rated it average for Evolutionary content and pagan culture. It might bother sensitive viewers. ***SPOILER*** Has good surprise ending; so that should help sensitive viewers. ***END SPOILER***
My Ratings: Moral rating: Average / Moviemaking quality: 4½