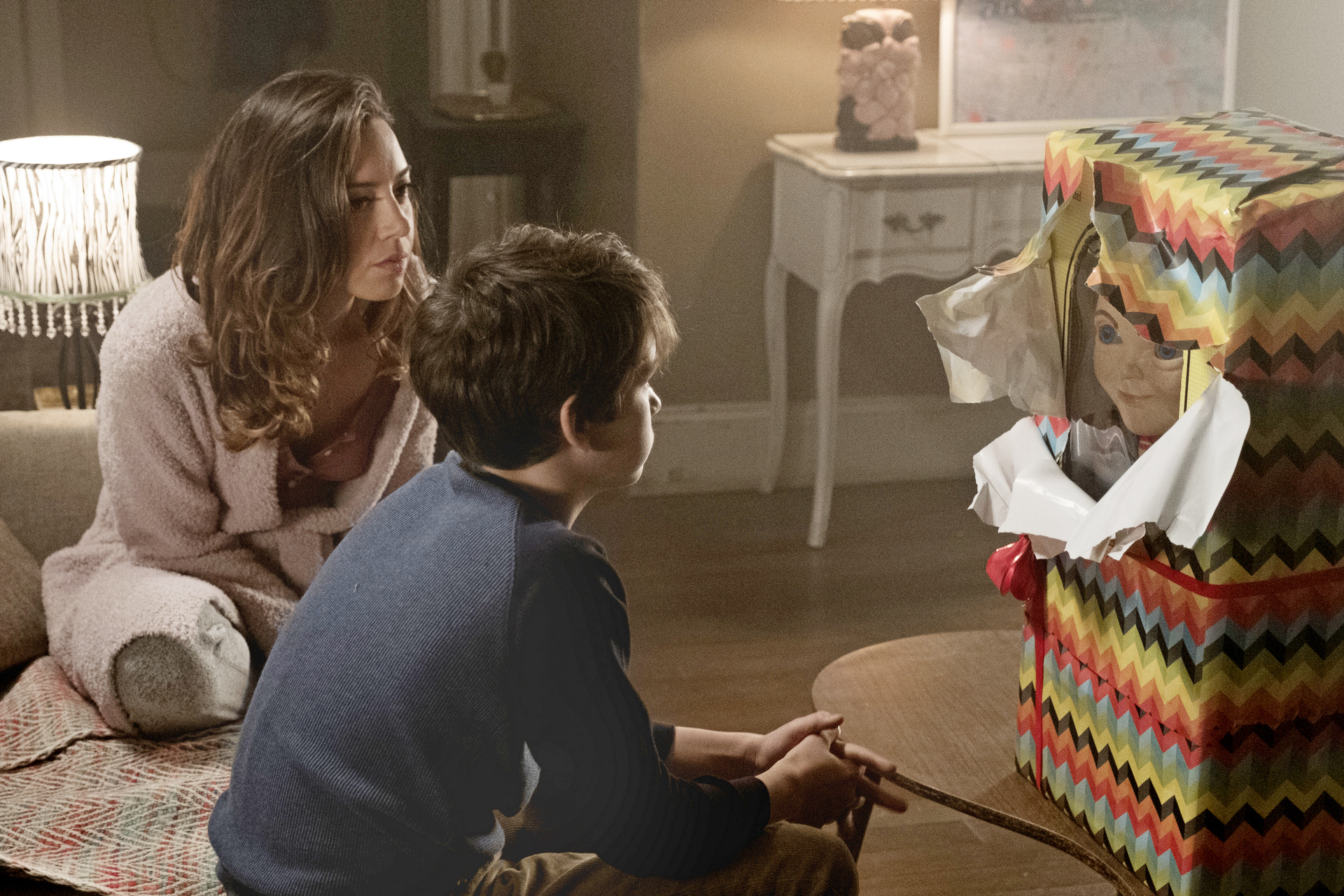 for bloody horror violence, and language throughout. 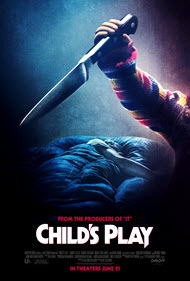 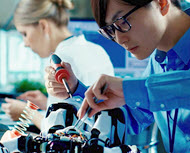 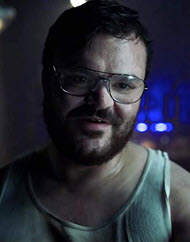 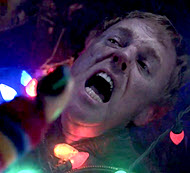 What are the effects of slasher horror movies on human minds and emotions? 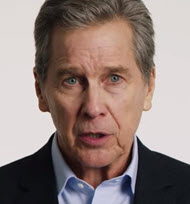 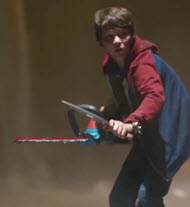 “More than a toy… he’s your best friend.”

I’ve never before seen a Chucky horror movie, though I have, of course, heard of them. They are known for being frightening in their use of cute toys, knives, children and families, blood and creative means of dismemberment. This one I found to be no different. The trailer gives an accurate foretaste. Though demons and occult are not plainly shown, there’s no doubt that it involves possession. “Child’s Play” is a story built on wicked foundations and may only be enjoyable to those who take pleasure in evil.

In fact, I did not stay for the full two hours because my stomach was churning unpleasantly. We never divulge the ending to our readers, anyway, and the film is too shamefully sin-loving to earn my respect or desire, so I left as soon as I sensed that the last scenes were near. This was the only God-honoring thing to do, as watching more would only do harm. There are times when it’s worth losing a few dollars of ticket value to keep our eyes ‘full of light’ and stay spiritually healthy (Matthew 6:22-23).

So, while I cannot claim to have seen the final minutes, here are my observations about the rest.

The story follows Andy, an ordinary young teen (13) who struggles with a miserable home life in a low-income part of town. He’s lonely and frustrated, tired of being mistreated or abandoned by every friend or family member. His mom—who brings home a string of nasty boyfriends—uses blackmail to obtain a defective artificial intelligence Buddi doll for her unhappy son, and Andy begins to express his thoughts and feelings to the new “best friend,” despite his suspicion that something is very wrong with the toy.

In the backstory, we see that a disgruntled Buddi employee in an overseas sweatshop has removed all security protocols in this doll’s computer programming, to avenge his sacking (firing). The lack of good restrictions—as with humans—enables evil to enter into this doll, and we dread how wrong it could go. The doll’s eyes flicker and change from blue to red, and he announces that his name is Chucky, not Buddi. He sets about imitating the bad behaviors seen in Andy, his friends and movie characters. His ‘self-learning technology’ then enables Chucky to do whatever he wants—and to explain it away as though it is logical. Chucky says he’s just trying to make Andy happy by forcing everyone who makes Andy unhappy to ‘go away.’

The question is whether Andy can realize Chucky’s evil nature soon enough and halt the killings with help from his friends, his mom and a kindly neighborhood policeman.

Simply put, nearly everything I can say about “Child’s Play” is negative.

The violence is extreme (even against animals), the blood loss is extreme and potential for disturbing effects on children are extreme. Dozens of injuries and deaths occur, either as quick shocks or slow torment. None are natural. Wicked intentions are frequent.

There are dark and heavy themes relating to death, abandonment, shallow friendships, bullying, guilt and anger which may cause young people or those weak in their faith to feel sickened, depressed and confused.

The role modeling is also astoundingly bad. An example of this is when Andy and his friends directly teach Chucky wickedness, such as to “look as creepy and mean as you can,” to frighten mom’s boyfriend. Later, a group of teen boys teach Chucky to stab a victim’s chest and say, “This is for Tupac.” Childlike, Chucky begins to mimic offensive phrases from the teens, adults and films, such as, “Heads up, b*tch,” just before a violent act. It’s presented as exciting discovery of the doll’s ‘powers,’ but anyone can see that it’s horrible stuff.

The adults, too, do not behave well enough to warrant imitation. Only two or three of the 10 main characters are somewhat likable. Even Andy’s mom feels difficult to love, as she is careless with Andy’s care, usually sneers and frowns and puts her own feelings above listening to her son. Do the writers do this to lessen viewers’ discomfort when many characters are harmed? Do they want us to think that killing is okay if the victim isn’t very nice?

Furthermore, gifts of God, such as unique personalities, parenting, friendship, sexuality and life itself deserve to be given higher worth than this movie affords them. The corruption, pain, disconnection and death of human beings is meant to be a matter of solemn grief for all people, not used as a concentrated entertainment. Even if a killer is slain, it is never ‘no big deal.’ God takes no pleasure in death, even the death of the wicked (Ezekiel 18:31-32), because they were His loved creations who grieved Him.

This is why His son Jesus came to destroy death by sacrificing Himself as a perfect ransom for us sinners. He is both just and merciful, even if humans are neither. But in “Child’s Play,” all this is ignored.

Another key concern for us is the use of child actors for about half of the starring roles. This involves real kids using strong expletives and being taught to simulate criminal acts of violence, which they probably don’t fully understand. They are seen using a variety of household-accessible weapons such as knives and power tools to try to destroy the toddler-sized Chucky.

Unlike the original, this latest Chucky film also involves many mentions of daily technologies in our children’s lives, such as cell phones, on-line videos, Cloud connection, robotic toys, artificial intelligence and remote controllable household appliances. Various issues in the story-line could increase fears of these being ‘possessed’ and misused for evil.

The rest of the offensive content is briefly listed in the summary.

As you may expect, the good points of a film like this cannot outweigh the bad, but here they are anyway.

The film features a well-done soundtrack that helps to contrast the sweet and awful aspects. Beautiful colors, lighting and cinematography also assist with the story’s flow, logic and moods. There are some genuinely humorous aspects, such as the doll’s first words being out of sync with its mouth movements, as often happens with mass-produced toys, and its comical attempts to recreate various facial expressions.

The only other positive aspect I noticed is the warning the film gives about how the simple minds of children may misunderstand and be misled by the hateful things we humans sometimes say in anger, and the delight we can seem to take in sinful entertainments.

For example, young and impressionable Chucky sees Andy watching a horror film and laughing hard, seeming happier than he’s been all week. Chucky then imitates the film’s behaviors—walking toward Andy’s friend wielding a huge knife!—and when challenged he says, “I thought it would make you happy, Andy.”

Do we ever demonstrate to children by our entertainment choices that a certain evil behavior is okay?

“Child’s Play” initially seems to have little in the way of spiritual content. The first mention is from a child trying to create ‘maximum Feng Shui,’ but, apart from this, religion is almost completely absent. Nevertheless, there are many religious—or anti-God—undertones.

Only one family of characters is presented as truly good and clean-living, and the lady who heads this household wears a silver cross on a chain around her neck. In a scary moment, she is heard calling, “Help me, Jesus,” but within a short time she turns to foul and angry phrases that involve curses. The implication is that her faith is flimsy and unable to help her, so is deserted when facing death.

We know that this is not the reality for true followers of Christ, as God never leaves us and is all-powerful to save, and millions of Christians have been able to retain faith all the way into eternity.

But is it a movie with spirituality, as it seems? No. The human heart’s wrestle with hurt, anger, justice and selfishness is deeply spiritual. Friendships, loyalties and abandonment are spiritual issues, too. Murder is a spiritual act, as it tries to steal God’s right to determine when a life starts and ends. And evil behavior always comes from an evil source.

Is Satan involved? In building dread, a few hints, such as the number 13, appear. Witchcraft masks and animal skulls hang on Andy’s bedroom walls. And though it’s very subtle at first, the ultimate suggestion is that an evil spirit named Chucky has managed to “possess” the Buddi doll. Unlike the good folk, evil Chucky seems to have access to huge resources of knowledge, power and skills. This implies that evil is much stronger than good—a very incorrect idea.

Despite starting attractively, after a short time, the preoccupation with random and gleeful destruction takes off. Several characters (even the hero) are seen smiling, laughing at and enjoying a variety of horrible things they do to each other, to toys or in games. Revenge and vigilante ‘justice’ are portrayed as reasonable responses to being harmed, even though human conscience tells us that vengeance is only doing further harm and ought to be left to God.

It is sad that so little real love, happiness or kindness occurs in “Child’s Play,” and characters rarely smile.

Another tell-tale sign that the movie is descending into very evil and twisted content is that most of the action occurs at night. Andy’s attendance at school is never glimpsed, despite him walking to and from it each day. Daylight almost seems to disappear into insignificance. This is an effect I’ve frequently noticed in sin-led lives and have seen backed up in Scripture; they prefer to live at night (John 3:19-20, Ephesians 5:8-16, 1 Thessalonians 5:5-7).

It is a dark and unworthy film.

Though I have tried to be discrete and not traumatize you with the exact horrors found in “Child’s Play,” please believe me that its restrictive rating is there for a reason. As you can see for yourself from the trailer and the evidence listed here, this is not a safe film for children, teens, young adults or even mature adults. I can only leave you with encouragement to find your pleasure in the Light of the Lord rather than the things of darkness which only lead to destruction.

“This is the message we have heard from him and declare to you: God is light; in him there is no darkness at all. If we claim to have fellowship with him and yet walk in the darkness, we lie and do not live out the truth. But if we walk in the light, as he is in the light, we have fellowship with one another, and the blood of Jesus, his Son, purifies us from all sin.” —1 John 1:5-7

“…For you were once darkness, but now you are light in the Lord. Live as children of light… and find out what pleases the Lord. Have nothing to do with the fruitless deeds of darkness, but rather expose them… It is shameful even to mention what the disobedient do in secret … Be very careful, then, how you live—not as unwise but as wise, making the most of every opportunity, because the days are evil.” —Ephesians 5:8, 10-11, 15-16