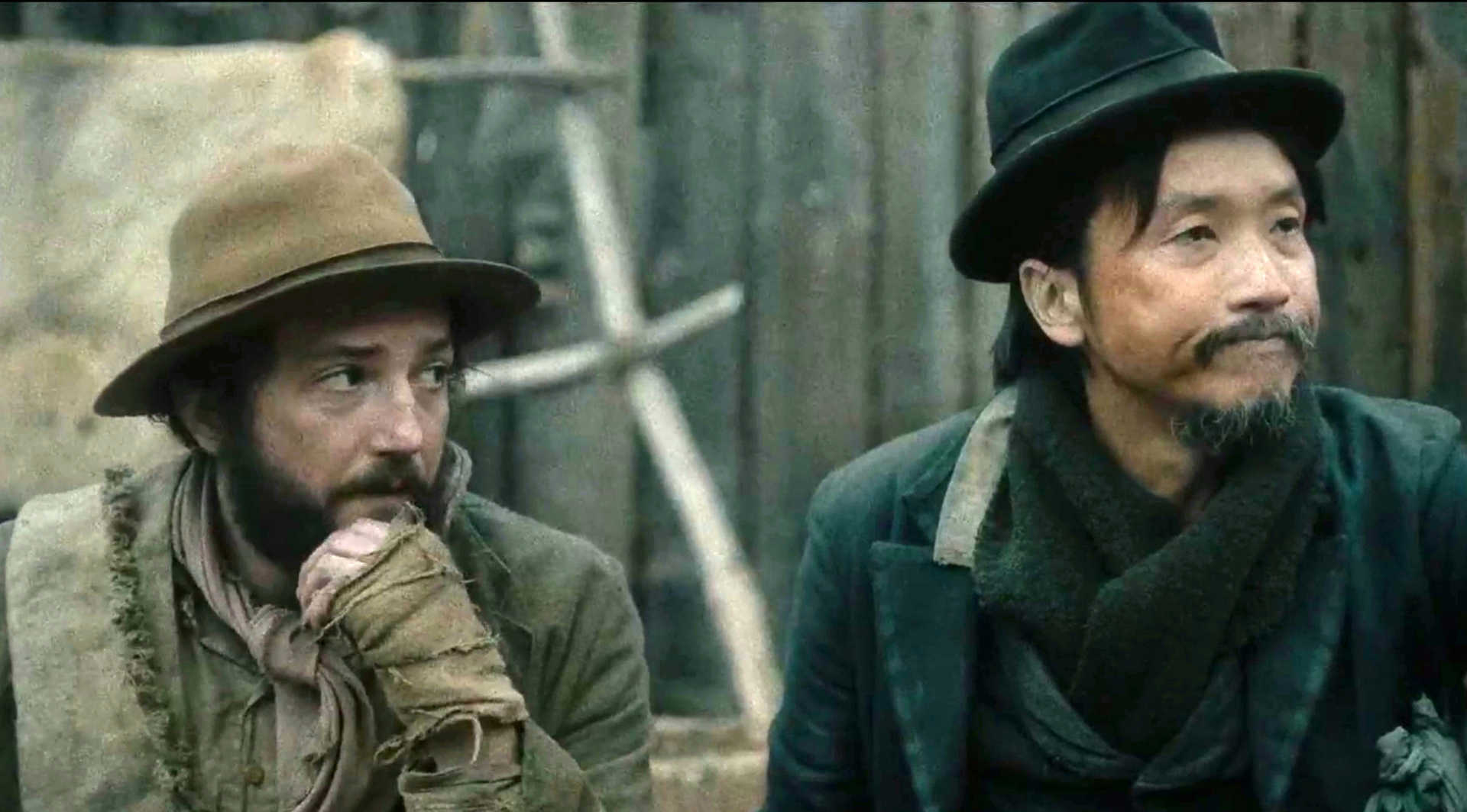 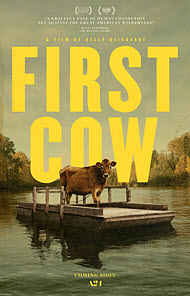 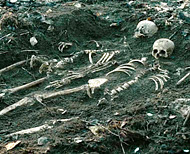 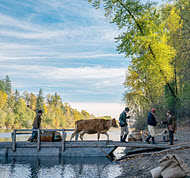 Friendship between men which includes loyalty

Harsh realities of life in the Old West

People’s self justification of their selfish sinful actions, such as stealing and cheating

About the fall of mankind 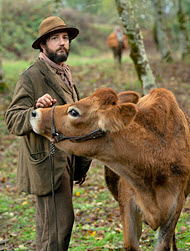 Cooks in the Bible 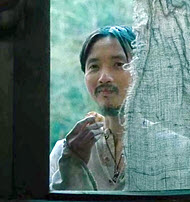 Chinese immigrants in the 1820s

About physical death and eternal death 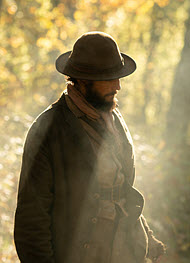 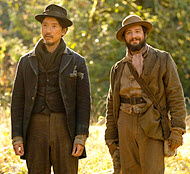 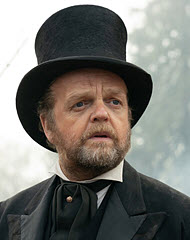 This film is based on the book The Half-Life: A Novel (2004) by Jonathan Raymond.

Early in Kelly Reichardt’s “First Cow,” King-Lu invites Cookie to rest in his feeble shack as he splits firewood. Instead of resting, Cookie is inclined to sweep the dirt floors, beat the fur carpet, and adorn the table with freshly picked flowers. It’s a simple scene. It has minimal dialog and stagnant camera movement. It’s pure—even mundane, and that’s what makes it impactful. The gentle kindness perfectly defines our characters and prepares us for the journey they are about to take.

“First Cow” takes place in the Oregon Territory in the 19th century. Cookie (John Magaro) is a cook traveling with a group of fur trappers. As they hunt, he gathers and prepares their meals. He feels like an outsider until he meets King-Lu (Orion Lee), a Chinese immigrant. The two strike up an unlikely friendship.

They live in a shack on the outskirts of a growing settlement. Their days drag on as they scrape by to make a humble living. However, everything changes when the first cow arrives in the region. Cookie imagines the possibilities that cow’s milk would bring to his cooking. Figuring it won’t hurt anyone, the two steal a small portion of the cow’s milk one night and use it for baking. King-Lu imagines the possibilities of selling the delicious food. He convinces Cookie to secretly milk the cow each night, so they can sell oily-cakes at the settlement. Their small, seemingly-harmless crime begins to pave a way for them to become successful businessmen, but this endeavor becomes potentially very dangerous.

As the film award-season approaches, you will hear “First Cow” mentioned frequently. From acclaimed director Kelly Reichardt (“Wendy and Lucy,” “Meek’s Cutoff”), this film separates itself from other films of today. It’s quiet. It’s slow. It’s modest. Unfortunately, Reichardt’s sedate style may deter many moviegoers. She ignores the standard pace and style of storytelling that most films follow. Rather than using a closeup to direct the audience’s gaze, she will leave the frame wide—allowing the audience to freely explore the scene on their own. She trusts her audience. She allows them to come up with their own conclusions. As a result, the audience participates in the characters’ journey—understanding their turmoil, their happiness, and even their boredom. And once the suspense finally builds, it’s in a whisper.

Friendship is at the core of “First Cow.” Cookie and King-Lu are very different, but their differences bond them. Cookie is sweet and kind, while King-Lu is smart and shrewd. This allows King-Lu to see the opportunity at their fingertips, but Cookie’s morals lead to apprehension. However, the temptation is too great. The two decide to steal the necessary milk to start their venture. As they find success, the temptation to steal more and more milk magnifies. There is never enough. They always need more. Their sin in never quenched.

“Temptation comes from our own desires, which entice us and drag us away. These desires give birth to sinful actions. And when sin is allowed to grow, it gives birth to death.” —James 1:14-15

“For the wages of sin is death, but the gracious gift of God is eternal life in Christ Jesus our Lord.” —Romans 6:23

I’ve heard “First Cow” characterized as a parable, and I think that’s an appropriate description. It deals with sin and its ramifications. It shows the value of kindness and friendship. It allegorizes capitalism, racism, and the American Dream. It emphasizes joy—a Fruit of the Spirit (Galatians 5:22). When a character peals off a small piece of biscuit and tastes it, you fully understand how amazing that simple joy can be. It starkly contrasts our culture today that is never satiated. The film itself was a similar joy for me. It is not loud and bombastic like the majority of today’s films, but it created a happiness that reached much deeper. Quietly and slowly, “First Cow” warmed me like one of Cookie’s honey glazed oily-cakes, and the taste lingers with me.