for language and some violence. 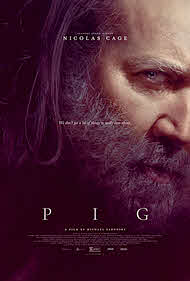 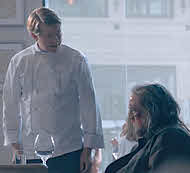 Living alone in the Oregonian wilderness

Thieves in the Bible: theft, robbery, the two thieves

Snooty urban restaurants and their chefs

Pigs in the Bible 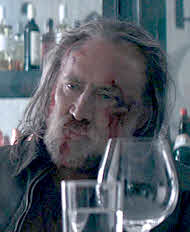 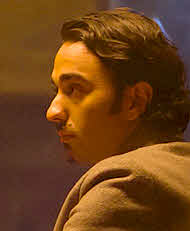 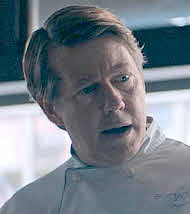 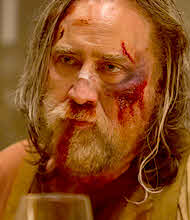 Nicholas Cage gives an understated, almost clandestine, performance in “Pig,” an original story and screenplay by first time director, Michael Sarnoski and his co-writer Vanessa Block. Cage’s performances of late have approached Grand-Guignol levels of bloodletting and bombast. As much as I liked and admired “Mandy” and “Prisoners of the Ghostland,” I wondered, and feared, what boundary he would cross next, but in “Pig,” Cage is gentle, contained, and even generous.

He may let the make-up designer straddle the rails (the facial wounds Cage suffers bleed, crack and indurate to the point of eruption), but the actor himself shuns some of his earlier films’ gruesome flamboyances, and delivers a soft, even refined, rendition of a wounded soul in search of truth.

Although an original screenplay, “Pig” is somewhat reminiscent of Joseph Conrad’s Heart of Darkness, a great novel whose theme tends to lose its impact whenever it is adapted to the screen. Francis Ford Coppola’s “Apocalypse Now” attempted to depict Conrad’s dark journey into the depths of the human soul but lost its way, giving us a confused mess that was coarse, and often ugly.

The twist in Sarnoski’s film is that the voyage travels in reverse, moving away from the wildness of nature into the cultured tidiness of civilization where brutality, lawlessness and corruption are rampant. Coyotes can be heard in the dark nights of the wild, but the howls are distant as they make their hunger known.

Inside the glass encased rooms of the city, sharpened teeth and growls are hidden behind a smile, but they are always at the ready. Violence is not a survival tactic but an elite sport, an acknowledged part of doing business and saving face. Fight clubs draw A-list crowds, and they’re a training ground for the more savage bloodletting that goes on behind etched marble walls and carved oak desks.

Ironically, this story of a trip to the abyss takes place not in one of our traditional “sin cities,” but in Portland, Oregon, where environmental ethos (or worship) melds with urban sophistication to create what should be, in fact we are often told is, a heaven on earth. What “Pig” depicts is an Earth that is a far cry from Heaven. All that should be delicate tends to rot before it even ripens.

You can ride a bicycle or a Tesla to a glistening restaurant where, after you wait months for a reservation, you can dine lavishly, but cautiously, on what appear to be mushy fusions, undecipherable essences and disappearing foams. One of the city’s celebrated chefs tries to explain the quirky phenomenon: “We deconstruct food by taking local ingredients and making them taste foreign.”

Robin Feld (Cage) lives off the grid in a shack far from the Portland city limits. His one companion, a pig, has a talent for sniffing out truffles, a skill that makes the man’s pet valuable to restaurant chefs in Portland where their patrons crave dishes laden with the rare underground fungi. The pig’s snorting aptitude is so valuable that one night she is stolen by thieves at the behest of a rich restauranteur.

Feld is determined to get his pig back, and I can’t blame him. His porcine companion is adorable, ever more huggable than that insipid little whiner in “Babe.” I admit that pigs have unsettled me since, never having actually seen a real one, my only knowledge comes from reading about them in “Animal Farm,” “Lord of the Flies,” and the Hannibal Lecter novels.

In the synoptic gospels, swine are depicted as receptacles for demons, and Matthew’s scripture warns us against throwing “pearls before swine.” Yet Cage’s pig means no harm, unless you count the animal’s deft ability to steal every scene they share. In that respect, the swine does, at times, trample her costar underfoot.

Feld enlists the help of Amir (Alex Wolff), a young and upcoming restaurant supplier who had been paying Feld for the truffles the pig finds. Amir strives not just for rare mushrooms, but for wealth, sophistication, and esteem. He drives a yellow sports car, listens to classical music (mostly to the syrupy duet scene from “Lakme”), and lives in a “Mask of Red Death”-style glass apartment overlooking the mayhem and grime of the city.

To Amir, and to us watching the film, Portland looks more like a “Mean Streets” town than an Eden of renewable goodness. It comes across as a city rotting at the foundations complete with secret tunnels under old hotels and hidden stashes sacked away in mortuaries. No one is friendly or welcoming. Amir strives to be a player, to be “with it” and “locked in.”

Feld becomes a father figure to him, an imperfect one, but someone who appreciates him for who he is, and not what he can do for him. Amir’s own father, played with curdling intensity by Adam Arkin in the best cameo bad guy turn since William Hurt in “A History of Violence,” is detached from his son, and contemptuous of him.

All three have experienced loss; it is Feld who teaches them that loss can be redemptive as well as wounding.

“The Lord is near to the brokenhearted
And saves those who are crushed in spirit.” —Psalm 34:18 NASB

I was relieved, and grateful, that Sarnoski avoided laying blame for the sins of a city and its inhabitants on the usual suspects: corrupt business tycoons, environmental bandits, zealous religious believers. He subtly reveals how treasures can corrupt, and how being poor in spirit can enrich a soul. Sarnoski builds a story that may seem ordinary, even thin, but there is a grace depicted in many of the scenes that makes for the kind of poetry I have not seen since “Babette's Feast,” that other wonderful film about food and generosity.

The movie’s story line makes Biblical references hard to resist: Feld is Nathan, calling out, but not hectoring, a kingdom that has started to lose its way, or even Abraham who chooses to live on the unforgiving rough hill terrain as opposed to Lot who chooses the fertile and pleasurable valley. As in those passages, humility, not pride, wins the day.

“Pig” is a small jewel of a film, helped immeasurably by a precise production design, dream like cinematography, and an excellent score that moves masterfully from pastoral melancholy to fine tuned madness. It may not be a conversion story, but it does shine a light on light itself.

Secular Movie Critics
…Nicolas Cage’s mythic tale of grief is one of the most honest movies about mourning ever made… a poignant Nicolas Cage performance… might be the most unexpectedly relatable movie Nicolas Cage has ever made. …
David Ehrlich, IndieWire