for mature themes and some profanity. 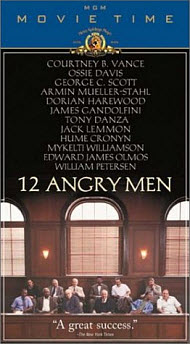 This remake of the 1957 movie, “TWELVE ANGRY MEN”, is crafted in a unique fashion. Firstly, it begins with only the title. Secondly, none of the characters’ names are mentioned. And thirdly, the director films the entire movie using just a few sets.

The plot revolves around jury deliberations for an 18 year old Hispanic boy (Douglas Spain), simply referred to as “The Accused,” who is on trial for the murder of his father. The movie opens with the Judge (Mary McDonnell) instructing the jury about the deliberation process as the accused sits, dazed and scared. The jury then immediately goes into the jury room and begins deliberations. It becomes apparent early into the discussions, that several of the men have personal prejudices that have a bearing on their judgment. Added into the mix is one ill juror, another man who is anxious to “get this over with” and get to a ball game, and the fact that it is “the hottest day of the year” and the air conditioner in the deliberation room is not working. You now have a set of conditions ripe for problems. When one juror raises doubts about the boy’s guilt, tempers flare and angry outbursts are frequent. The more doubts that are voiced, the more intense the men get, fearing that this lone dissenter is trying to “twist the truth.”

What makes this movie work is the fact that we, the viewers, do not know if the accused is guilty or innocent, therefore we evaluate the evidence and clues as if we are the jury. This movie portrays the deliberation process almost in “real time,” taking approximately ninety minutes to come to a verdict. We see the arguments as each juror struggles to sort the evidence from the opinions. This approach makes for an interesting example of how juries think. I recommend this movie for teens or adults who enjoy drama, but action-oriented viewers will probably lose interest.

The biggest area of concern in this movie is the language. With twelve instances of someone taking the Lord’s name in vain, many Christians will be offended. Also fifteen other uses of foul language, including one use of the “f” word, are scattered throughout. This count is to be considered a minimum, since it was often difficult to hear exactly what the men were saying during their heated outbursts (several men were yelling at the same time). Other areas of concern were: several characters used racial slurs and showed a disrespect for elders, two men are shown urinating in a rest room (seen from the waist up), the murder is often described or reenacted (but not in a graphic way), and one character smokes a cigarette in one scene.

Although there is no mention of God, except for the misuses of His name, the movie does touch upon the biblical principle of punishment for one’s evil deeds. Oftentimes, when non-ethical attitudes are shown, they are also rebuked. Another positive aspect of this movie is that we are encouraged to seek the truth and not be so quick to judge others. The most prevalent biblical principle that many Christians will be able to identify with is the issue of standing up for your beliefs, even if you have to stand alone and be ridiculed by others.

Performances in this film, particularly by Jack Lemmon and the late George C. Scott, are extremely well done. I liked the message that one person’s opinion can and does matter. My Ratings: [3/5]