also known as: Heliopolis, Heliopolis in Augustamnica and Heliopoli, Bethshemesh, Beth-Shemesh and Aven

This is the name of an ancient idolatrous Egyptian city mentioned in Genesis 41:45 and Gen. 41:50. It was the great seat of Sun-worship, called also Bethshemesh (Jeremiah 43:13) and Aven (Ezek. 30:17), stood on the east bank of the Nile, a few miles north of Memphis, and near Cairo, in the northeast

The Vulgate and the Septuagint Versions have “Heliopolis” (“city of the Sun”) instead of On in Genesis and of Aven in Ezekiel. 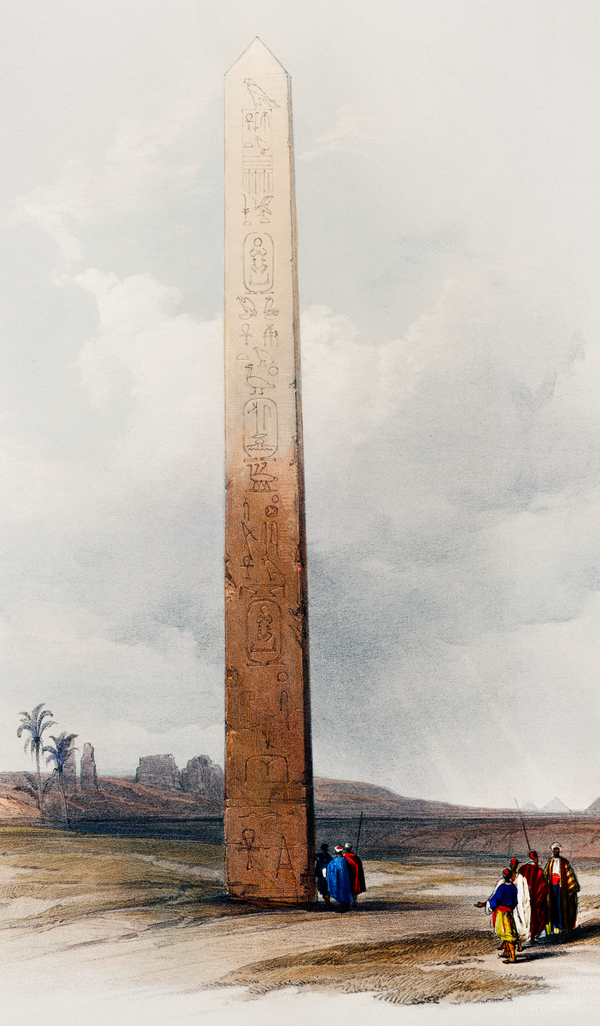 A surviving Temple of Atum at On (Heliopolis) obelisk as seen in the early 1800s
Illustrator: David Roberts’ (1796-1864) Nile Illustration, “Egypt & Nubia”. Photographer: Rawpixel Ltd. Licensed by CC BY 2.0.

Obelisks to the Sun god

In ancient times, this city was full of obelisks dedicated to the Sun god. The Al-Masalla obelisk of the Temple of Atum/Ra-Atum) (or Temple of Tum —“the Sun) was erected by Pharaoh Senusret I and is still standing in its original position. Another of this temple’s obelisks stands on the Thames River Embankment in London, England (popularly called Cleopatra’s Needle although not actually connected with her). Its twin was moved to New York’s Central Park. One was moved to Rome, and others throughout Egypt. Almost all of the ruins of On were scavanged to build Cairo in medieval times.

Ancient Egyptian obelisks are made of a single stone (generally granite), not multiple pieces, and are usually covered in hieroglyphs.

However, in 2017 a colossal statue (26 feet tall) of Pharaoh Psamtik I was discovered at the site of a temple belonging to Pharaoh Ramses II. The back of the statue has a carving depicting Psamtik kneeling with offerings to the false “creator god” Atum.

“It was at On that Joseph wooed and won the dark-skinned Asenath, the daughter of the high priest of its great temple.” This was a noted university town, and here Moses gained his acquaintance with “all the wisdom of the Egyptians.”

Site of ancient On (Heliopolis) in Egypt—satellite view