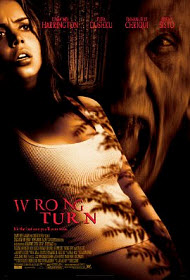 Axes in the Bible

“It’s the last one you’ll ever take.”

Here’s what the distributor says about their film: “A wrong turn leaves a group of young people trapped—and hunted in the West Virginia wilderness.

Chris Flynn is driving his car for a job interview in another city. However, an accident with a trunk transporting chemical products blocks the highway and Chris looks for an alternative route through the mountains of West Virginia to accomplish his schedule. Due to a lack of attention, he crashes another car parked in the middle of the road with flat tires. Chris meets a group of five friends, who intended to camp in the forest, and they decide to leave the couple Francine and Evan on the place, while Chris, Jessie, Carly and her fiancé Scott tries to find some help. They find a weird cabin in the middle of nowhere, where three violent cannibalistic mountain men with the appearance of monsters live. The two couples try to escape from the mountain men while chased by them.”

As this is a ‘high concept’ film I am not going to spend much time on the plot, so pay attention, this will be quick: Young people stray from the well-trodden path, young people get eaten. See, the lesson is not complicated. Talking of uncomplicated things, a quick word about characterisation. There is none. Brooding hero, beautiful but tough as old boots heroine, incidental and dispensable friends of the above. And the bad guys… inbred deformed cannibal hillbillies. There is no sex on-camera… There are moments of genuine edge-of-your-seat terror in the film, mostly provided by the unmitigated evilness of the three hillbillies.

These are hideously deformed, and superhumanly single-minded, with a taste for nubile young rock-climbers. The action takes place in an unending forest in West Virginia, where the beautiful people are picked off (and presumably brought home for stewing) one by one. There is a lesson to be learned, however… two survive the ordeal, both relying on a mixture of gutsiness and stickability to get through it.

Those who die, with one exception, do so unheroically. The violence is sudden and bloody, but unapologetic in its hamminess. It’s stomach-churning at times, but only momentarily so, as the action rattles along without a backward glance.

In general, I found it harmless horror. The only people who can rightfully complain that they were severely offended by this film are inbred West Virginian Hillbillies.
Violence: Extreme / Profanity: Moderate / Sex/Nudity: None /
My Ratings: [Average/3]

Eva, age 27, Ireland
Movie Critics
…Simply put, if you’ve previously seen one such picture like this before, there’s no real need to catch this one, as it brings absolutely nothing new to the genre. If you’re unfortunate enough to head down the path of seeing this film, that will be the only “Wrong Turn” you’ll likely take that day.