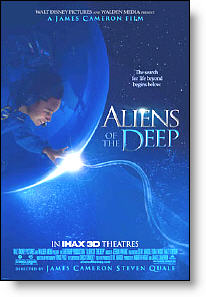 Top choice for accurate, in-depth information on Creation/Evolution. The SuperLibrary is provided by a top team of experts from various respected creationist organizations who answer your questions on a wide variety of topics.

What disturbing roadblocks are researchers discovering in attempting to prove evolutionary origins? Answer

Where did life come from? Is evolution really the best scientific answer? Answer

Can evolution be the source of life in all its complexity? Answer

Are we alone, or is there life elsewhere in the universe? Many Christians have, like the world, become captivated with the idea of life on other planets. But what does the Bible seem to indicate? Answer

What about the “Mars rocks” from Antarctica? Answer

“The search for life beyond begins below.”

Here’s what the distributor says about their film: “James Cameron, Academy Award® winning director, deep ocean adventurer, and space exploration visionary, combines his talent and his passions in the forthcoming digital 3D film Aliens of the Deep. Cameron takes audiences to the depths of the ocean to encounter some of the strangest life forms on Earth, while inviting us to imagine what future explorers may someday find on other planets.

Aliens of the Deep presents the highlights of more than 40 dives made to the Mid-Ocean Ridge, a submerged chain of mountains that winds 46,000 miles around the globe and contains mineral-rich volcanic vents with names like Lost City and Snake Pit. These vents spew constant clouds of super-heated water, made dark as smoke by substances sent up from deep beneath the Earth’s crust.

Innovative, daredevil filmmaking, an exciting partnership with NASA, engaging educational materials, interactive web adventures, and a National Geographic companion book make Aliens of the Deep a truly immersive, multi-media experience. Movie-goers will join James Cameron on a “magical mystery tour” of the most spectacular footage ever made of active hydrothermal vent communities, teaming with life.

The creatures are abundant and very strange, including 6-foot tall worms with blood-red plumes, white crabs, and an absolutely astonishing biomass of blind, white shrimp, all competing to find just the right location in the flow of superheated water—or fry trying. “They are as close to alien life as anything seen on Earth,” says Cameron. “A clue to what might exist elsewhere.”

“Aliens of the Deep” gives first-hand insight into Cameron’s passion for exploration, the extreme machines that allow humans to explore the deep, and the possibilities that exist both below and beyond the horizon. Cameron and the mission scientists help us consider the correlations between life under water and the life we may one day find in outer space.”

Positive—…I am a Roman Catholic… I really did not find this movie offensive at all. I do have a Ph.D. in history, and I found INTELLECTUALLY offensive; the storyline was weak, and if the producer would have bothered to hire even a mediocre historian who knows even some basic facts about ancient civilizations, he would have saved himself some embarrassment. Obviously, he did not do that.

Personally, I believe God made man as the ONLY intelligent species in the universe. …So, if you go to Blockbuster and rent this movie, there is nothing MORALLY offensive it. You may be disappointed in it, but for $3.00, I would say it is worth it.
My Ratings: Better than Average/2

Patrick Jung, age 41
Comments from young people
Neutral—This movie was fascinating. The creatures are just plain amazing. One of the offensive parts is the mild language. There was only one use of the Lord’s name in vain. There is also a saying that maybe the Aztecs (I think, I’m not sure if it was a different tribe or not) were right about worshipping the sun. Other then that it is a great movie to watch with your family.
My Ratings: Better than Average / 3½

Roger Ebert, Chicago Sun-Times
…stirs excitement about exploration of all kinds… a wonder to behold…

Wesley Morris, Boston Globe
…old-fashioned IMAX 3-D infotainment… the excitement of “Aliens of the Deep” comes from that most old-school, low-tech of elements: real human beings…

Lisa Schwarzbaum, Entertainment Weekly
…it’s worth a look for the razzle-dazzle photography, but don’t expect much in the way of serious science…