for some language and brief violent material. 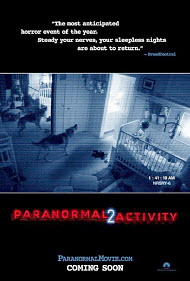 “Paranormal Activity 2” starts with a suburban American family moving into a new house. All goes well, and they enjoy living in their new home. Unfortunately for them, something is not right. Strange things start happening in their home. Several mysterious break-ins with nothing or next to nothing missing catch no one’s eye. Gradually, the disturbances start getting worse until the family realize that all is not well.

The family becomes rattled as things get worse. Even the little infant and dog begin to notice things. The mother in the family has her sister come visit, and she notices these things, too.

Negative spiritual content is throughout the movie. The main characters, a man with his wife and two kids, hire a foreign housekeeper who performs minor rituals in the house to “get rid of evil spirits.” The father objects to these rituals and fires the housekeeper. These rituals are performed multiple times and in different ways. Other rituals are mentioned, but not shown on screen (sacrificing goats). The father hints at atheism and unbelief in anything spiritual. Two sisters mention that they once visited a seance. A scene transpires where two characters play with a Ouji board.

The main plot of the movie focuses on ghosts, and later demons and what disturbances they cause to the family in and around their house. Multiple characters are affected by demons, and a couple characters become demon-possessed. ***SPOILER*** A demon-possessed character brutally murders three people, two murders of which are shown. The same character kidnaps another. ***END SPOILER***

Other spiritual content includes crosses and talk of witches.

The film starts by acquainting the audience with the family, to gain sympathy for their plight. However, with the use of so much evil spirituality, this goes nowhere. Seances are mentioned, a Ouji board is played with, and characters become demon-possessed. This is billed as entertainment. Jesus said in Revelation 9:21 that,

“Nor did they repent of their murders, their magic arts, their sexual immorality or their thefts (NIV).

Today, people have become so engrossed supernatural evil as entertainment, when these things are all forbidden in the Bible. Every single spiritual thing in this movie is forbidden by God. If we shouldn’t do it, should we really watch it? Save your money, a better current choice may be “Red”.

Positive
Positive—It’s understandable why people look at this movie and are offended by the language used, as well, the sexual references and, of course, the supernatural themes, but I think what makes this movie so well received by the general public is its shock and scare factor—and, to be honest, I really enjoyed it! It’s cleverly filmed, to ensure a very good jumpy film. Understandable if people found it offensive, but it’s a well done film.

Jimmy, age 20 (Australia)
Neutral
Neutral—The occult pracices mentioned were bad, but they were done by kids goofing off, and the overall messages of both PA films were DON’T MESS WITH DARK STUFF. No other message should be taken from the films. ***SPOILERS*** Another important thing this film shows is a cross banishing a demon from a woman’s body; how is this not good?? It’s excellent.

Unfortunately, the nasty maid frightened the husband with the idea that the only way to ensure the demon didn’t return was to sic it on a blood relative-the sister. So he did, and whether his actions actually sent the demon to the sister or the demon chose to do so anyway, the consequences were tragic: his family was not protected, but killed. Rather than trusting the power of the cross alone, he used witchcraft and paid for it dearly. I thought this moral of the tale was clear, Biblical, and vital. ***END SPOILER***
My Ratings: Moral rating: Average / Moviemaking quality: 5

Jennifer Corry, age 26 (USA)
Negative
Negative—“Paranormal Activity 2” is a major disappointment, especially compared to the first “Paranormal Activity.” On a certain level the film works, it is well acted, well shot, and some of the plot twists that connect it to the original are quite interesting. However, it takes forever to start.

The first film started its scares out small but it started building them right away. In this film, it takes almost half the movie before this family even seems to realize anything is going on. One of the reasons that “Paranormal Activity 1” was so scary was because the characters are terrified from the beginning, and, therefore, when even small things like keys fall off a counter, we are convinced that an evil force is behind, not a special effects man. When some scares do start, I thought FINALLY the movie is going to start, but then often times there would be a logical explanation for them, so we were back to square one with the family, not even knowing that something was going on. Some scenes even lead you to believe something scary is going to happen and then conclude with a lame joke.

When the scares finally do start, it is too late, I was so bored by that time I couldn’t even tell you how effective they were, honestly, because I had just given up caring by then.

The R rating is relatively mild with a little more violence than the first film and with just enough f-words thrown in probably so that viewers will think that an R rating will guarantee a scary movie. Guess what. It didn’t.
My Ratings: Moral rating: Average / Moviemaking quality: 2

ANDREW, age 34 (USA)
Comments from non-viewers
Negative—If we really think about this one it is a no brainer. Having not seen this movie, and for good reason I think it’s safe to say that no believer in Christ should waste their precious moments on something that puts the enemy and his kingdom on an entertainment “fear” pedestal. For fear is not from the Creator. Being “spooked” for fun is just giving some sort of authority to the one whom the bible calls “little” or “is that it”. The enemy wants you to think that there is no way out. That you can’t lay your head down on your pillow without thinking that the things in this movie are reality for you. The fruit of the spirit is peace, don’t fall for this trap.
My Ratings: Moral rating: Extremely Offensive / Moviemaking quality: none