for language and some violence/terror. 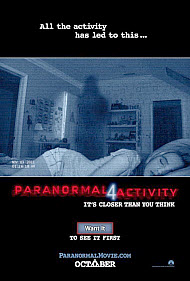 how stress can affect families

“All the activity has led to this… It’s closer than you think.”

Here’s what the distributor says about their film: “The story takes place in 2011, five years after Katie killed her boyfriend Micah, sister Kristi, her husband Daniel and took their baby, Hunter (now named Robbie). Story focuses on Alice and her mom, experiencing weird stuff since the new neighbors (Katie and Robbie) moved in the town.”

The plot: Well, there’s this teenage girl, see, and she lives with her parents and her adopted brother in this house, and there’s this little kid next door who…

Well, forget about that. The nitty gritty is that there’s a demon that is trying to gain possession of someone, and, when he does, all sorts of people will die. We don’t see them die. The deaths are offscreen. I saw this movie on an IMAX screen in Calgary, and I was the oldest person in the audience (I’m 39.) The rest of the people were teenagers, and they all screamed happily at the multitude of scares that were in store for them.

I have a Christian friend who was so frightened over one of those PA movies that she couldn’t sleep for a week. I don’t blame her. The Bible clearly teaches that demons are real. If I was a Christian filmmaker, and I felt compelled to make a movie about demonic possession, I would insist on showing Jesus Christ as the only way of dealing with it. The family in PA4 does not call on Jesus, and, well, I don’t want to give away the ending. Somehow, however, I don’t think the filmmakers were trying to preach a Christian message here.

You know… a while ago, I noticed that no one on this site had volunteered to review “Sex and the City 2” when it was playing in theatres. To my knowledge, that movie is still not reviewed on this site. Let that be to our credit. Most of us are familiar enough with the TV show to know that the movie would be more of the same, probably a wee bit raunchier. But when it comes to all these movies about the demonic and the paranormal and Satan, I jump at the chance to review them. I know that a review will do very little good (does anyone really think they’ll find anything edifying in “A Nightmare on Elm Street”?), but I do it because I can go see an evil movie and know “I was doing it for the ministry.”

I hope there isn’t a “Paranormal Activity 5,” but there probably will be. I hope I don’t have to review it.

Positive
Positive—I loved this movie. I haven’t seen the other 3 films, so, as a non-fan, I must say it was enjoyable. The content and plot depict demons/ghosts and/or possible witchcraft, which may scare some Christians. But my faith is strong, so it didn’t scare me, at all. Also, this movie may appeal to teenagers because of the young actors. There isn’t any “horrific” images, until the last minute. So, for the most part, it’s clean and only offers “jump scares”. I personally found the movie to be funny, because of Ben, played my Matt Shively. The teen characters have great chemistry and act like normal teens. They do frequently say bad words, and there are a few sexual references, but the content was all in fun. And I gave the Christian moral rating excellent, because of the after-credits scene, where an man enters a store and sees an image of Jesus Christ. And with some of the rumors, I’m assuming Christianity is going to be the possible savior in the next movies that cast away the demons/spirits/witches. That’s what I think.
My Ratings: Moral rating: Excellent! / Moviemaking quality: 3

Michael, age 18 (USA)
Positive—I just saw this film with a group of Christian college students, and I absolutely loved it! It is not the most well made movie that I’ve seen, but I do think the moviemaking quality has certainly improved considerably from the first three films in this series. It had an interesting plot twist; it was an excellent continuation of the story, and I really enjoyed the characters. Yes, there is some language in this film, but it’s used realistically and is not glorified or used to shock.

This is a scary film, but in a different way from most horror films. Most often the film causes you to jump, simply because of unexpected things happening. It brings the same rush that a haunted house would cause. There is nothing twisted, kinky, or disturbed, like in many other films, nor is there the dark occult themes that one would often find in this genre. It is certainly not a film I would let younger children see, but I think for late high school or college aged individuals it’s a fun movie.
My Ratings: Moral rating: Better than Average / Moviemaking quality: 3

Hannah, age 18 (USA)
Negative
Negative—This film absolutely disgusted me. As a Christian follower, this movie contains witchcraft “coven” symbols that the main character finds around the house and demonic possession is taken as entertainment and not for its educational purpose of how serious the outcome and consequences are of this topic. Also, Ben (Alex’s friend) is tempting Alex to flash herself for him on a Skype conversation, which I found to be very distasteful for a movie like this.
My Ratings: Moral rating: Very Offensive / Moviemaking quality: 1½

Chris, age 20 (USA)
Negative—I loved the first 3 films in this series. This one did nothing to further the story and wasted it’s potential to explore the witches and what Katie’s been up to. The mystery of who the kid is, is convoluted. And why is this still found footage? Seriously? They are stretching to make this work and it’s not working anymore. I’m dreading part 5.
My Ratings: Moral rating: none / Moviemaking quality: 1

John B. (agnostic), age 31 (USA)
Comments from non-viewers
Negative—I did not watch the movie yet, but just to give people a heads up, yes, there will be a fifth one. I will not tell where I got the information on knowing where I got it, but there will be a fifth one those, I am not going to see the fourth one because for me being a Christian in Christ Jesus I will not let that stuff hurt me in my walk for Christ.

I don’t highly don’t recommend any of the rest of the paranormal activity’s to anyone, and I would highly recommend you to see the fifth one when that one does come out, I also know the date for it, and will as well not reveal it. I would rather see people go and see a better movie than this one, it’s not worth the time. Please trust what I say and make the right choice. God Bless. I don’t have a verse to support what I say right now, but if you won’t trust me, trust God and go to him in prayer, and see what he would want you to do. The Choice is yours.