for some violence, language, brief sexuality and drug use. 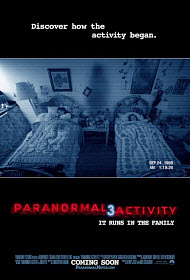 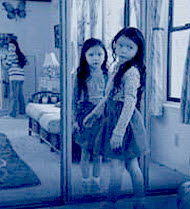 how stress can affect families

“It runs in the family.”

The film “Paranormal Activity 3” is a prequel to the popular horror film series. This time, the audience is taken back to where the female leads in the first film are now little girls. The two sisters (Kristi and Katie) live with their mother, Julie, and her boyfriend, Dennis. However, it’s Kristi that starts to interact with an invisible force that starts to wreak havoc in their home after a mysterious earthquake.

Dennis brings in one of his friends, Randy, to help him set up cameras around the house to see what is causing all of the mysterious happenings. Through the tapes, Dennis observes that Kristi is, in fact, talking to “someone” and tries to find out who, or what, it is. She gives her “friend” the name Toby and tells Dennis and the rest of her family that she has to do what Toby says or else she will get in trouble. Although Kristi listens to Toby, he still wreaks havoc around their home by smashing objects, scratching and attacking people in their sleep, and trapping them inside rooms. And they can find no way to stop it.

There is plenty of offensive content within this film, but I will try to make it as short and brief as I can. There are a few innuendos and the beginning of Dennis and Julie making a sex tape until they are interrupted by an earthquake (there is no nudity). There are around 15 f-words, 7 s-words, and God’s and Jesus” names are both abused nearly 10 times. God’s name is paired with d*mn and Jesus” name linked with the f-word (both used once). We see Julie smoking a joint in one scene, and Dennis reads up on demonology, as well.

The violence is fairly bloodless, but can still be quite intense and disturbing for some viewers. As I mentioned earlier, Kristi says that she can’t say much about Toby and has to do what he says, otherwise she will be in trouble. So viewers feel the sense of a child being in danger for most of the film. There are also many moments of furniture (including people) being thrown around and smashed by an invisible force, and Dennis getting scratched (we later see the scratch on his torso). Also, Katie is stopped by an invisible force and lifted in the air by her pony tail while screaming. Later, she gets dragged off screen, and we hear her screaming more, and Kristi has to plead with Toby to make him stop. There is also a moment of a woman with a broken neck floating above a staircase, and then thrown into the camera, and also a crawling man who is lifted in the air and then has his backbone visibly snapped in half as he is folded backward. There are numerous jump scenes in this film.

I have never seen the first two films, so I more or less walked into this film blind. I expected a few good jump scenes and scares, but, in the end, was very disappointed with its quality. The acting wasn’t convincing, the directing was off key, and the jump/scary scenes barely made me twitch. I found myself almost falling asleep during the longest 84 minutes I have ever witnessed on film. The story was too straightforward, unoriginal, and had too many plot holes. The writing alone was a bitter disappointment. The jumps and screams in the theater itself were more entertaining and more exciting than in this movie.

Today’s audience likes to have a good scare at the movies, now and then. But does it really have to be a story about a demon possessed home? What about scary, suspenseful classics, such as “Rear Window” or “Rebecca”? Yes, they are old movies and they wouldn’t make you jump out of your seat, but they were suspenseful and unpredictable. They added a blend of scare with suspense which made the films work so well. It’s sad to see that audiences nowadays have to resort to stories about demon possession in order to fulfill their entertainment needs.

Some people take the subject of demonic possession way too lightly. After I viewed this film I thought to myself “That movie was really fake and poorly made, but demonic possession is real… so it really can happen.” Many people just view films like “Paranormal Activity” as a good, but fake scare. Although the actual film itself is fake, its source material isn’t. This is Satan at work trying to reel audiences into the trap of a new horror franchise. But we as Christians need to protect ourselves from such harmful elements and should be extremely offended by such entertainment. 1 Peter 5:8 says we need to “Be alert and of sober mind. Your enemy the devil prowls around like a roaring lion looking for someone to devour.”

Demonic possession is a subject that shouldn’t be taken lightly and should only be used for educational purposes, not entertainment. I cannot recommend “Paranormal Activity 3” to any audience of any age, not only because of its strong language, intense violence, drug use, and moment of sexuality, but because of its message: making the occult an entertainment medium for audiences today.

Comments from young people
Neutral—Before viewing this Paranormal Activity, you have to understand that it is about spiritual warfare, and not in a biblical way. It can be very disturbing to some viewers and boring to others. I liked the way it was filmed, but the spiritual content was a little to much for my taste.
My Ratings: Moral rating: Offensive / Moviemaking quality: 4½